The Japanese air raids on Darwin on 19 February 1942 were the largest attacks ever mounted by a foreign power against Australia. They were also a significant action in the Pacific campaign of World War II and represented a psychological blow to the Australian population, several weeks after hostilities with Japan had begun. The raids were the first and largest of almost 100 air raids against Australia during 1942–43.

This event is often called the "Pearl Harbor of Australia".[2] Although it was a less significant military target, a greater number of bombs were dropped on Darwin than were used in the attack on Pearl Harbor.[3][4] As was the case at Pearl Harbor, the Australian town was unprepared, and although it came under attack from the air another 58 times in 1942 and 1943, the raids on 19 February were massive and devastating by comparison.[5]

Darwin had a population of about 2,000 at the time, the normal civilian population of about 5,000 having been reduced by evacuation. It was a strategically placed naval port and airbase, and there were about 15,000 Allied soldiers in the area.[citation needed]

Most of the attacking planes came from the four aircraft carriers of the Imperial Japanese Navy's Carrier Division 1 (Akagi and Kaga) and Carrier Division 2 (Hiryū and Sōryū). Land-based heavy bombers were also involved. The Japanese launched two waves of planes, comprising 242 bombers and fighters.

It is claimed that Darwin was poorly covered by anti-aircraft guns, there being only light automatic weapons and none of 20 mm or greater calibre.[6] However, the 14th Heavy Anti-Aircraft Battery was stationed in Darwin at the time with their guns positioned at several locations, including overlooking the harbour.[7]The operational Royal Australian Air Force (RAAF) fighter squadrons were in Europe, North Africa or the Middle East.

The only modern fighters at Darwin were 12 USAAF P-40E Warhawks of the Far East Air Force's 33rd Pursuit Squadron (Provisional), which had arrived on 15 February after being diverted to cover a convoy that left Darwin before its arrival.[8] There were a few lightly armed or obsolete training (five unserviceable Wirraways) and patrol (six Hudson) aircraft belonging to the RAAF. An experimental radar station was not yet operational.

Coincidentally, 10 of the P-40 fighters and a B-17E Flying Fortress had departed Darwin at 09:00 a.m. on the 19th, bound for Kupang Airfield on Timor, from which they would stage to Denpasar Airfield on Bali, and then on to Java (the B-17 was a navigation guide for the fighters). The fighters had turned back after just 20 minutes because of bad weather over Kupang.[9] The fighter pilots were relatively "green", only one of whom, 2nd Lt Robert G. Oestreicher, had more than 20 hours flight time in the P-40, 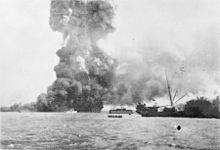 The MV Neptuna explodes at Stokes Hill Wharf. In front of the explosion is HMAS Vigilant which is undertaking rescue work. In the centre background is the floating dry dock holding the corvette HMAS Katoomba. In the foreground is the damaged SS Zealandia.

The first wave of 188 Japanese planes, led by naval Commander Mitsuo Fuchida, took off at 8:45 a.m.

At about 9:15 a.m. the force was spotted by an Australian Coastwatcher on Melville Island (disputed by Robert Rayner in the book Darwin Fortress), and then also by Father John McGrath, a Catholic priest conducting missionary work on Bathurst Island.[10] Father McGrath sent a message, "An unusually large air formation bearing down on us from the northwest". Darwin received both warnings at least twice by radio, no later than 9:37 a.m. The Australian duty officer assumed these reports were referring to the returning flight U.S. fighters and its B-17 escort. The warnings were not acted upon, so as at Pearl Harbor two months earlier, Darwin's final chance to make last-minute preparations for the impending raid slipped away.

A USN Catalina aircraft near Bathurst Island was pounced upon by nine of the Zero fighters, and the plane caught fire although it defended itself. Its pilot, Lieutenant Thomas Moorer, managed to crash land upon the sea and the crew were picked up by a passing freighter, the Florence D. Lieutenant Moorer later became Chief of Naval Operations and Chairman of the Joint Chiefs of Staff. Although the Florence D was later attacked and sunk, Moorer and most of his crew survived to be later picked up on land. Another nearby ship, the Don Isidro, was also sunk. 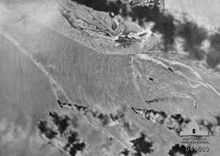 An aerial photograph of vessels burning in Darwin Harbour taken by a Japanese airman during the first raid.

The U.S. fighters had not yet entirely landed when the Japanese aircraft arrived. The second flight of five P-40s was still waiting to land when the reports were received and they climbed through 8,000 feet (2,400 m) to patrol over the harbour, still holding their drop tanks. With greater numbers, surprise, experience, and superior aircraft on their side, the Japanese fighters rapidly shot down all of the US planes except one piloted by Oestreicher. The other flight of five, which had already landed, attempted to take off again, but one crashed on the runway and two others were quickly shot down. The remaining two were shot down in the combat that followed. Four of the ten pilots were killed.[11]

A total of 81 Nakajima B5N "Kate" torpedo bombers then attacked shipping — at least 45 vessels—in the harbour, while 71 Aichi D3A "Val" dive-bombers, escorted by 36 Mitsubishi A6M Zero fighter planes attacked Royal Australian Air Force (RAAF) bases, civil airfields, and a hospital. Oestreicher was credited by USAAF with shooting down one of the two Vals he claimed (2nd Lt. John G. Glover claimed a Zero that was not credited) and managed to survive the attack, but no other Allied planes took off – all were destroyed or rendered unable to fly after the first attack. By about 10:40 a.m. the first wave of Japanese planes had left the area.

In spite of Fuchida's assessment of the anti-aircraft fire as "largely ineffectual", the lack of armour and self-sealing fuel tanks in many Japanese planes, as well as the prolonged low-level strafing runs carried out, made pilots and planes exceptionally vulnerable to ground fire.[12] Most Australian sources say that four Japanese planes were destroyed in Australian airspace.

Fuchida later wrote of the raid:[13]

Just before midday there was a high altitude attack by land-based bombers, concentrated on the Darwin RAAF Airfield: 27 Mitsubishi G3M "Nell" bombers flew from Ambon and 27 Mitsubishi G4M "Betty" from Kendari, Sulawesi. This second raid lasted for 20–25 minutes. 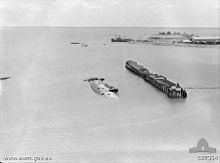 The number of people killed during the 19 February raids is disputed. The Lowe Commission, which investigated them in March 1942, identified 243 victims but assuming a few were unidentified concluded "the number is approximately 250".[14] Some researchers and government officials, including John Bradford (author of In the Highest Traditions – RAN Heroism Darwin 19 February 1942),[15] Dr. Peter Stanley (the Australian War Memorial’s Principal Historian and author of several books about Australian military history),[16] Tom Womack (author of The Dutch Naval Air Force against Japan),[17] Paul Rosenzweig (author of Darwin 1942: a reassessment of the first raid casualties),[18] and Rear Admiral Kevin Scarce (governor of South Australia)[19] have said there were 250–262 fatalities.

However, a plaque unveiled in Darwin in 2001 gave the total as 292.[20] The plaque indicated 10 sailors had been killed aboard the USS William B. Preston but the US Navy said there were 13 fatalities[21] and Peter Grose, author of An Awkward Truth, said fifteen – he wrote:

In 2000, Darwin historian Peter Forrest, who spoke to survivors and researched the attacks for an unpublished book, said (as paraphrased by a journalist), "the first Japanese air raids on Darwin probably killed more than double the official figure of 243"[23] but two years later lowered his estimate to "anything up to double that 243".[24]

Other estimates put the toll far higher: one soldier who was there claimed to have seen barges filled with bodies towed out to sea, a member of one of the burial teams recounted seeing uncounted bodies "shoved in a large hole dug by a bulldozer” (paraphrase), according to some sources, Darwin mayor Jack Burton estimated 900 people were killed; Harry Macredie, who helped rescue survivors and recover bodies in the harbor said, "we definitely estimate over 1,000",[24] Rex Ruwoldt, one of the soldiers attacked that day, says that a few days after the raid he was told over the field telephone that Army Intelligence estimated 1,100 were killed.[15] According to an AP article about the 50th anniversary of the attacks "some estimates say as many as 1,000 died".[25] Bradford[15] and Forrest[24] said they spoke to survivors who estimated as many as 1,500 people died.

Stanley, Grose, Rosenzweig [18] and Tom Lewis [26] rejected such numbers. The former said "it was certainly not the 1,024 claimed recently in unsubstantiated reports" [27] and the Grose wrote "numbers such as 1,100 are fancifully high".[28]

By contrast, there is less dispute over the number of injured during the attacks. The Lowe Commission estimated "between 300 and 400" people were wounded.[29] Lewis said the number was over 400, about 200 of which were seriously injured.[30] Womack wrote that 311 were wounded.[17] Australian military historian Chris Coulthard-Clark put the total between 250 and 320.[31] Grose wrote:

...if 900 or 1100 died, why were the numbers of injured so low? The count of the injured is more accurate, because they were treated in hospital or shipped out aboard the Manunda [a hospital ship]. The hospitals and Manunda noted names and numbers of those they treated.[32]

Among the ships damaged but not destroyed was a hospital ship, AHS Manunda.[36] The USS William B. Preston which had already departed Darwin was attacked at sea and docked at Derby, Western Australia 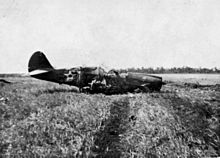 The air raids caused chaos in Darwin, with most essential services including water and electricity being badly damaged or destroyed.[37] Fears of an imminent invasion spread and there was a wave of refugees, as half of the town's civilian population fled. There were reports of looting, with Provost Marshals being among the accused.[38] According to official figures, 278 RAAF servicemen were considered to have deserted as a result of the raids, although it has been argued that the 'desertions' were mostly the result of ambiguous orders given to RAAF ground staff after the attacks.[39] Following the second Japanese air raid, the local RAAF wing commander Sturt Griffith:

While the Northwest area staff could see what was happening and issued countermanding orders, "the damage was done and hundreds of men were already beyond recall".[41]

The Australian army faced difficulty controlling its own troops from looting private property including "furniture, refrigerators, stoves, pianos, clothes [and] even children's toys" due to the breakdown of law and order after the bombing and the ensuing chaos.[42] Many civilian refugees never returned, or did not return for many years, and in the post-war years some claimed that land they owned in Darwin had been expropriated by government bodies in their absence.[citation needed]

After the massive 19 February 1942 Japanese raid, the Northern Territory and parts of Western Australia's north were bombed 62 more times between 4 March 1942 and 12 November 1943.[43] One of the heaviest attacks took place on 16 June 1942 when a large Japanese force set fire to the oil fuel tanks around the harbour and inflicted severe damage to the vacant banks, stores and railway yards. The Allied navies largely abandoned the naval base at Darwin after the initial 19 February attack, dispersing most of their forces to Brisbane, Fremantle and other smaller ports. Conversely, Allied air commanders launched a major build-up in the Darwin area, building more airfields and deploying many squadrons.

The four IJN aircraft carriers (Akagi, Kaga, Hiryū and Sōryū) that participated in the Bombing of Darwin were later sunk during the Battle of Midway in June 1942.

A memorial ceremony is held every year on 19 February at the Cenotaph in Darwin. It starts at 9:58am, the precise time of the first attack.[citation needed] The raid is also portrayed in the film Australia as a major plot event. 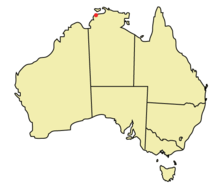 Location of Darwin on Australian continent