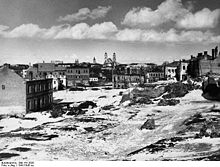 Minsk after the bombing.

The Minsk Blitz was the heavy bombing of the city of Minsk (population was 270,000) in the USSR during the Second World War.

During 24 June 1941 three waves of bombers, of 47 aircraft each, bombed Minsk. The anti-aircraft defense of the city was poorly organized, and panic ensued. Because the water supply was destroyed, fires could not be put down. Inhabitants left the city.

As much as 85% of the city's buildings and the entire infrastructure was destroyed. More than 1,000 people were killed.