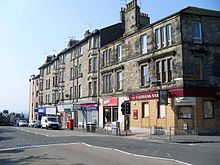 The Clydebank Blitz refers to two devastating Luftwaffe air raids on the shipbuilding town of Clydebank in Scotland which took place in March 1941.

As a result of the raids on the nights of 13 and 14 March 1941, the town was largely destroyed. It suffered the worst destruction and civilian loss of life in all of Scotland. 528 people died, 617 people were seriously injured, and hundreds more were injured by blast debris. Out of approximately 12,000 houses, only seven remained undamaged — with 4,000 completely destroyed and 4,500 severely damaged. Over 35,000 people were made homeless.

Clydebank's production of ships and munitions for the Allies made it a target (similar to the Barrow Blitz). Major targets included the John Brown & Company shipyard, ROF Dalmuir and the Singer Corporation factory. A total of 439 bombers dropped over 1,000 bombs. RAF fighters managed to shoot down two aircraft during the raid, but none were brought down by anti-aircraft fire.[1][2]

In his book Luftwaffe over Scotland: a history of German air attacks on Scotland, 1939-45, amateur historian Les Taylor qualified the Clydebank Blitz as "the most cataclysmic event" in war-time Scotland. He claims that while the raid on 13 March was not intended as a terror attack, it caused extensive damage because there was a lot of housing near the specific targets. But the bombing the following night was indeed a terror attack as it "was intended to crack morale and force the people to call for an end to the war. However, it had quite the opposite effect, strengthening resolve for the war in Scotland."[3]

Alexander Grozier, one of the survivors, believes the Government deliberately attempted to keep the story of the raids quiet "because they believed the Germans were trying to break people's morale." John MacLeod who lived in Clydebank as a boy agrees: "There’s certainly evidence that the Government was anxious to downplay the Clydebank Blitz. For instance, they took a long time to release official casualty figures – and only after great pressure from local MPs in the House of Commons.” He believes the news was kept out of the papers because the authorities did not want the Germans to return to the targets they missed.[4]

Effectiveness of the raids

Despite the devastation in the town itself, the Clydebank air raids were far from a military success. Among the primary targets were the John Brown Shipyard and Beardmore's Diesel Works, neither of which was seriously damaged. The only plant completely destroyed was the Strathclyde Hosiery Company.[4]

A war memorial is dedicated to the crew of a Polish destroyer, ORP Piorun, which helped defend the town from the docks of the John Brown & Company shipyard.[5] It is located directly opposite from the Town Hall, which has itself a shrine dedicated to those in Clydebank who died during World War I and World War II. There is another war memorial on Graham Avenue.