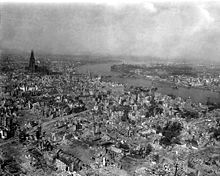 The City of Cologne was bombed in 262 separate air raids[1] by the Allies during World War II, including 31 times[clarification needed] by the Royal Air Force (RAF). Air raid alarms went off in the winter/spring of 1940 as enemy bombers passed overhead. However, the first actual bombing took place on 12 May 1940.[2] The most notable attack on Cologne was the first Allied 1,000 bomber raid on 30/31 May 1942. 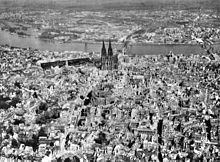 The first 1,000 bomber raid by the RAF was codenamed Operation Millennium, Cologne was chosen as the target and the raid took place on the night of 30/31 May 1942. The Thousand bomber raid was launched for several reasons:

At this stage of the war RAF Bomber Command only had a regular front line strength of around 400 aircraft, and were in the process of transitioning from the twin engined medium bombers of the pre-war years to the newer more effective four-engined 'heavies'. By using bombers and men from Operational Training Units (OTU's), 250 from RAF Coastal Command and from Flying Training Command, Harris could easily make up the 1,000 aircraft. However, just before the raid took place, the Royal Navy refused to allow the Coastal Command aircraft to take part in the raid.[3] The Admiralty perceived the propaganda justifications too weak an argument against the real and pressing threat of the U-boats in the Battle of the Atlantic. Harris scrambled around and, by crewing 49 more aircraft with pupil pilots and instructors, 1,047 bombers eventually took part in the raid, two and a half times more than any previous raid by the RAF. In addition to the bombers attacking Cologne, 113 other aircraft on "Intruder" raids harassed German night-fighter airfields.

Cologne was not the first choice of target - that was Hamburg - but poor weather shifted the choice to Cologne, the secondary target[4] 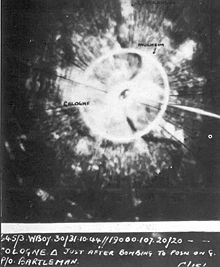 This was the first time that the "bomber stream" tactic was used and most of the tactics used in this raid remained the basis for standard Bomber Command operations for the next two years and some elements remained in use until the end of the war. It was expected that such a large number of bombers flying in a bomber stream through the Kammhuber line would overwhelm the German night fighters, keeping the number of bombers shot down to an acceptable proportion. The recent introduction of GEE allowed the bombers to fly a given route at a given time and height. The British night bombing campaign had been in operation for some months, and a statistical estimate could be made of the number of bombers likely to be lost to enemy night fighters and flak, and how many would be lost through collisions. Minimising the former demanded a densely packed stream, as the controllers of a night fighter flying a defensive 'box' could only direct a maximum of six potential interceptions per hour, and the flak gunners could not concentrate on all the available targets at once. Earlier in the war four hours had been considered acceptable for a mission; for this raid all the bombers passed over Cologne and bombed in a window of 90 minutes, with the first having arrived at 00:47 of 31 May. It was anticipated that the concentration of bombing over such a short period would overwhelm the Cologne fire brigades and cause conflagrations similar to those inflicted on London by the Luftwaffe during the Blitz

In the raid, 868 aircraft bombed the main target with 15 aircraft bombing other targets. The total tonnage of bombs dropped was 1,455 tons with two-thirds of that being incendiaries. Two and a half thousand separate fires were started with 1,700 classed by the German fire brigades as "large". The action of fire fighters and the width of the streets stopped the fires combining into a firestorm, but nonetheless most of the damage was done by fire and not directly by the explosive blasts. 3,330 non-residential buildings were destroyed, 2,090 seriously damaged and 7,420 lightly damaged, making a total of 12,840 buildings of which 2,560 were industrial or commercial buildings. Among the buildings classed as totally destroyed were: 7 official administration buildings, 14 public buildings, 7 banks, 9 hospitals, 17 churches, 16 schools, 4 university buildings, 10 postal and railway buildings, 10 buildings of historic interest, 2 newspaper offices, 4 hotels, 2 cinemas and 6 department stores. The only military installation damaged was the flak barracks. The damage to civilian homes, most of them apartments in larger buildings, was considerable: 13,010 destroyed, 6,360 seriously damaged, 22,270 lightly damaged.

The number reported killed was between 469 and 486, of whom 411 were civilians and 58 military. 5,027 people were listed as injured and 45,132 as "bombed out".[citation needed] It was estimated[who?] that from 135,000 to 150,000 of Cologne's population of nearly 700,000 fled the city after the raid. The RAF lost 43 aircraft (German propaganda claimed 44),[5] 3.9% of the 1,103 bombers sent on the raid. The losses were 22 aircraft were lost over or near Cologne, 16 shot down by flak, 4 by night fighters, 2 in a collision and 2 Bristol Blenheim light bombers lost in attacks on night fighter airfields. A posthumous Victoria Cross was awarded to Flying Officer Leslie Thomas Manser.