The city of Belgrade was bombed during two campaigns in World War II, the first undertaken by the Luftwaffe in 1941, and the latter by Allied air forces in 1944. 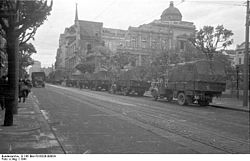 Destroyed the Yugoslav royal palace (Peter II of Yugoslavia) in King Milan Street in downtown Belgrade. One of the main target of German air force during the first wave of bombing on 6 April 1941, were the royal palaces, in the center of town and Dedinje. 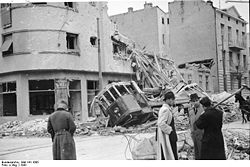 Damage caused by the German bombing. 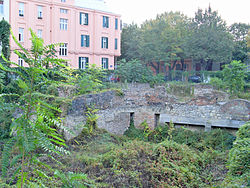 Remains of the National Library in Belgrade, Bombed on April 6. 1941.

At the end of March 1941 the Kingdom of Yugoslavia was forced to join the Axis, which ignited a popular revolution in the country; this led to a coup d'état and a switch in foreign policy with a re-orientation to join the Allies. This happened in a crucial moment, when the Wehrmacht was in the final stages of preparation for Operation Barbarossa against the Soviet Union. The successful opening of a campaign in the east required either a diplomatically secured or militarily subdued Balkans - free from the possibility of British intervention - and it was this act of Yugoslav defiance which resulted in Hitler's order for immediate punitive action.

Operation Punishment was the code name for the German bombing of Belgrade during the invasion of Yugoslavia. The Luftwaffe bombed the city on April 6 (Palm Sunday) without a declaration of war, continuing bombing until April 10. More than 500 bombing sorties were flown against Belgrade in three waves coming from Romania where German forces were assembled for the attack on the Soviet Union. Most of the government officials fled, and the Yugoslav army began to collapse.

The attack on Yugoslavia was one of the earliest terror bombings of World War II. In the following days Bulgaria, Hungary, and Italy joined Nazi Germany in partitioning Kingdom of Yugoslavia, with the support of the newly established fascist[1] puppet state Independent State of Croatia. The country was absorbed within 12 days, and Greece fell a week later, which made the Third Reich the master of most of continental Europe and ready for launching the attack against Soviet Union.

Although Hitler`s orders were specific about the destruction of the city, they were replaced in the last moment for military, communications and logistical targets in the city by Generaloberst Alexander Löhr - the commander of the Luftwaffe formations that bombed Belgrade - and his staff.[2][3] In the survey prepared by the Luftwaffe ten days after the attack to assess the results obtained by the 218.5 tons dropped, the following targets are mentioned: the royal palace, the ministry of defence, military colleges, the main post office, the telegraph office, railway stations, powerplants and barracks.[4][5][6]

Waves of Luftwaffe bombers and Stuka dive bombers bombed Belgrade, killing 2,271 people as officially registered soon afterwords, but probably more in fact, anything between 5,000 to 10,000 [7][8] though some estimates put the figure as high as 17,000 civilians killed [1] - and thousands of buildings were destroyed. According to William Stevenson, in his biography of Sir William Stephenson: "After four days of what the Germans code-named Operation Punishment, some 24,000 corpses were recovered from the ruins. Untold numbers were never found."[9] The most important cultural institution that was destroyed was the National Library of Serbia, with 300,000 unique items including priceless Medieval manuscripts.

German Field Marshal von Kleist said during his trial after the war: "The air raid on Belgrade in 1941 had a primarily political-terrorist character and had nothing to do with the war. That air bombing was a matter of Hitler's vanity, his personal revenge." The bombing without a declaration of war become one of the prosecution's charges which led to the execution of the commander of the Luftwaffe formations involved, General Löhr. 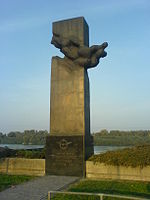 Monument to the pilots – defenders of Belgrade at New Belgrade

Although information is mostly sketchy, many sources say that Axis countries (in this case, Germany, Italy, and probably Hungary) deployed up to 2,000 combat aircraft during the bombing of Belgrade. The Royal Yugoslav Air Force's defenses were mostly obsolete. Out of 487 operational combat aircraft in the inventory of the Yugoslav Air Force in 1941, less than 150 of them were fit enough to pose a threat to modern Nazi fighters. During April 6 and 7 of 1941, the Yugoslav Royal Air Force only downed about 90 to 100 enemy aircraft. [2]

Belgrade was bombed by Anglo-American air forces on April 16 and 17, 1944, which was Orthodox Easter Day. The most important unit that took part was American 15th Air Force, based in Foggia in the south of Italy. This carpet bombing raid was executed by 600 bombers flying at high altitude. Civilian casualties were as many as 1,160, while German military losses were 18. [10] [11] Belgrade was bombed again on 6 and 8 September 1944 with about 120 flying fortresses from U.S. 15th Air Force, which were accompanied by fighter jets. Ironically, the Serbian resistance movement was saving the Allied pilots that were shot down by German anti-air defenses (Operation Halyard).