Stockton-on-Tees is a market town in north east England. It is the major settlement in the unitary authority and borough of Stockton-on-Tees. For ceremonial purposes, the borough is split between County Durham and North Yorkshire as it also incorporates a number of smaller towns including Billingham, Yarm and Thornaby. The wider borough has a population of 191,000 as of 2011 estimates.

Stockton began as an Anglo-Saxon settlement on high ground close to the northern bank of the River Tees.

The manor of Stockton was created around 1138. It was purchased by Bishop Pudsey of Durham in 1189 and since then has undergone many changes.

Stockton's market can trace its history to 1310, when Bishop Bek of Durham granted a market charter – to our town of Stockton a market upon every Wednesday for ever.

The first recorded reference to Stockton Castle was in 1376. The Scots captured it in 1644 and occupied it until 1646. It was destroyed at the order of Oliver Cromwell at the end of the Civil War. A shopping centre, the Castlegate Centre, now occupies the castle area. There are no known accurate depictions of the castle in existence.[2]

In 1771 a five arch stone bridge was built replacing the nearby Bishop's Ferry. Until the opening of the Middlesbrough Transporter bridge in 1911 this was the lowest bridging point on the Tees.

In June 1890 Major Robert Ropner offered a piece of land to the people of Stockton which could be used as a public park, providing the local council would lay it out tastefully and keep it forever. On 4 October 1893 the park was officially opened by the then Duke & Duchess of York. After a century of regular use by the people of Stockton, the park was refurbished and renovated between 2004–2007 to its former glory by Stockton Council, thanks to a £2.65m grant from the Heritage Lottery Fund. It includes a new bandstand, based on the original design, a Park Ranger's Office and a cafe, (run by the local charity, the Friends of Ropner Park.[3]

Shipbuilding in Stockton began in the 15th century, and prospered in the 17th and 18th centuries. Smaller-scale industries began developing around this time, such as brick- and ropemaking, the latter reflected in road names such as Ropery Street in the town centre. Stockton became the major port for County Durham, northern Yorkshire and Westmorland during this period, exporting mainly rope made in the town, agricultural produce and lead from the Dales.[4][5]

The town grew rapidly as the Industrial Revolution began, with iron making and engineering beginning in the town in the 18th century. The town's population grew from 10,000 in 1851 to over 50,000 in 1901 as workers moved in. The discovery of iron ore in the Eston Hills resulted in blast furnaces lining the River Tees from Stockton through to Redcar. The first bell for Big Ben was cast in Stockton in 1856, but became damaged beyond repair while being tested and had to be replaced.[6]

The Stockton and Darlington Railway was opened in 1825, the first public passenger railway in the world. The line connected Stockton with Shildon.

The town has many suburbs with individual identities: Fairfield, Grangefield, Hardwick, Hartburn, Elm Tree Farm, Norton, Roseworth, Newtown, Bishopsgarth and Oxbridge to name a few. Within the borough, but distinct settlements from the town of Stockton, are Thornaby-on-Tees, Ingleby Barwick, Billingham and Yarm.

The town is served by the transpennine A66 and the A19. A link road has recently been completed which connects the A66 with the town centre and Ingleby Barwick. This road has been numbered the A135, replacing the old A135 route which was previously the A19. The old A135 has been renumbered the A1027, which continues on through the town to Billingham.

East of the town centre is the A1046 which runs through Portrack as Portrack Lane. This road is a major retail destination, mainly in home furnishings and DIY. The A1046 continues on to its norther terminus at Port Clarence.

The A139 connects the town centre with the northern suburb of Norton. This road was the original route for the A19 before a bypass was built to the east of the town.

The A177 runs from Stockton town centre to Durham, passing Sedgefield on the way. It acts as a major route to the town.

Several miles to the west is the A1(M).

Several bus services operate in Stockton. Most services pass through High Street. The services cover large areas of the region including Middlesbrough, Teesside Park, Thornaby, Billingham, Sedgefield, Durham, Sunderland, Peterlee and Newcastle upon Tyne. Among the companies operating bus services, Stagecoach on Teesside and Arriva North East are the major providers, while six minor providers also operate in the area.[7]

Stockton railway station serves the town, but more regular and distant services are operated from nearby Thornaby. 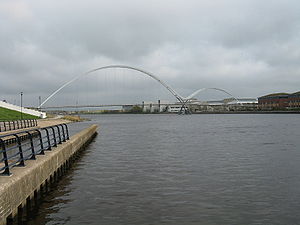 The Infinity Bridge, opened in 2009

Major industries in Stockton have included ship building and repairing, steel and chemicals.

The town is famous for its associations with the Stockton and Darlington Railway, which operated the world's first steam-hauled passenger train in 1825. The town also has the world's oldest passenger railway station building, and also contains much Georgian architecture, one notable example being the world's oldest Georgian theatre,[citation needed] constructed in 1766.

During the twentieth century the town's heavy industry declined dramatically, along with that of the surrounding Teesside area. Since the 1980s the town has seen an increase in service industries.[citation needed] 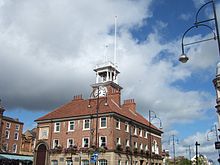 The town's High Street is reputed to be the widest in England.[8]

Stockton borough has undergone many developments in recent years including Durham University's Queen's Campus and several acres of office buildings erected along the south bank of the River Tees within the Teesdale development in Thornaby-on-Tees, Wellington Square, a modern shopping arcade erected upon the old Wellington Street area of the town centre, the Teesquay Millennium Footbridge and the Infinity Bridge. At Castlegate Quay a full size replica of James Cook's Bark Endeavour is moored. HMS Kellington was also moored on the river in Stockton between 1993 and 2009, when she was broken up in situ. In 1995, after four years in the building, the Tees Barrage was commissioned. The Tees Barrage White Water Course is located there. In 2009, the Infinity Bridge was opened.

Stockton is also home to the multi-million pound ARC, which opened in 1999 and whose resident drama company is currently the Arden Theatre Company. Stockton F.C. existed from 1882 till 1975, with Thornaby F.C. and Norton & Stockton Ancients F.C. taking over as the local sides. The town also has a local rugby side, Stockton Rugby Club.

Stockton hosts an annual firework display on 5 November, which has grown in recent years. The 2007 display attracted around 100,000 people and played host to a giant Catherine wheel display.

Stockton is the location of HMP Holme House, a Category B prison for adult men. The prison holds inmates from the Tees Valley, South West Durham, East Durham and North Yorkshire.

Dovecot Street in Stockton is home to the Corner House Youth Project,[10] a registered charity which works with people aged 8–25; the project's current director is Jacky Duncan.

Work is underway to develop the north bank of the River Tees in Stockton with the £300 million Northshore scheme, which will include new offices, leisure facilities, housing, a 150-bedroom hotel and a new campus for Durham University.[11][12][13]

Plans have been announced to restore the Globe Theatre, located in the town centre, to use. The venue, famous for hosting acts such as The Beatles, Rolling Stones and Buddy Holly, has been closed since 1993 after being used as a bingo venue since 1977. The plans, announced by local developers Jomast and approved by Stockton Council, would resurrect the theatre as one of the North East's largest live entertainment and performance venues, with a capacity of 2,400.[14] Work started on the redevelopment in April 2011, and The Globe is expected to re-open in late 2012.

The Teesside White Water Course, located in the town, is undergoing a £4.6 million upgrade which will make it the first sustainable white water course, and one of the best, in the world. It is hoped that the facility will be used as a training venue for the 2012 Summer Olympics.[15][16]

People born in Stockton include:

Other notable residents include:

The University Hospital of North Tees is located in the town and serves the town, the borough, and parts of County Durham. It is part of the North Tees and Hartlepool NHS Trust.