The Lockheed Hudson was an American-built light bomber and coastal reconnaissance aircraft built initially for the Royal Air Force shortly before the outbreak of the Second World War and primarily operated by the RAF thereafter. The Hudson was the first significant aircraft construction contract for the Lockheed Aircraft Corporation—the initial RAF order for 200 Hudsons far surpassed any previous order the company had received. The Hudson served throughout the war, mainly with Coastal Command but also in transport and training roles as well as delivering agents into occupied France. They were also used extensively with the Royal Canadian Air Force's anti-submarine squadrons. 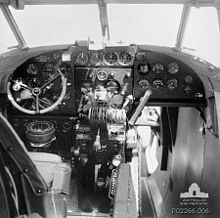 In late 1937 Lockheed sent a cutaway drawing of the Model 14 to various publication showing the new aircraft as a civilian aircraft and converted to a light bomber.[1] This attracted the interest of various air forces and in 1938, the British Purchasing Commission sought an American maritime patrol aircraft for the United Kingdom to support the Avro Anson. On 10 December 1938, Lockheed demonstrated a modified version of the Lockheed Model 14 Super Electra commercial airliner, which swiftly went into production as the Hudson Mk I.[2]

A total of 350 Mk I and 20 Mk II Hudsons were supplied (the Mk II had different propellers). These had two fixed Browning machine guns in the nose and two more in the Boulton Paul dorsal turret. The Hudson Mk III added one ventral and two beam machine guns and replaced the 1,100 hp Wright Cyclone 9-cylinder radials with 1,200 hp versions (428 produced).

By February 1939, RAF Hudsons began to be delivered, initially equipping No. 224 Squadron RAF at RAF Leuchars, Scotland in May 1939. By the start of the war in September, 78 Hudsons were in service. Due to the United States then-neutrality, early series aircraft were flown to the Canadian border, landed, and then towed on their wheels over the border into Canada by tractors or horse drawn teams, before then being flown to RCAF airfields where they were then dismantled and "cocooned" for transport as deck cargo, by ship to Liverpool. The Hudsons were supplied without the Boulton Paul dorsal turret, which was installed on arrival in the United Kingdom.

Although later outclassed by larger bombers, the Hudson achieved some significant feats during the first half of the war. On 8 October 1939, over Jutland, a Hudson became the first RAF aircraft to shoot down a German aircraft. (The first British aircraft to shoot down a German plane was a Blackburn Skua of the Fleet Air Arm on 26 September 1939.) They operated as fighters during the Battle of Dunkirk. A PBO-1 Hudson of US Navy squadron VP-82 became the first US aircraft to destroy a German submarine [3] when it sank U-656 southwest of Newfoundland on 1 March 1942. A Hudson of Royal Canadian Air Force Bomber Reconnaissance Squadron 113 became the first aircraft of RCAF's Eastern Air Command to sink a submarine, when Hudson 625 sank U-754 on 31 July 1942.[4]

A Royal Australian Air Force Hudson was involved in the Canberra, Australia air disaster of 1940, in which three cabinet ministers of the Australian government were killed.

Following Japanese attacks on Malaya, Hudsons from No. 1 Squadron RAAF became the first aircraft to make an attack in the Pacific War, sinking a Japanese transport ship, the Awazisan Maru, off Kota Bharu, an hour before the attack on Pearl Harbor. If this occurred one hour before the Pearl Harbor attack it would have been 0118 local time, an extraordinary night operation.

A Hudson was the first Royal New Zealand Air Force aircraft in air combat in the Pacific theatre when on 23 Nov 1942.[5] F/O George Gudsell's NZ2049[6] was engaged by three Japanese floatplane fighters after spotting an enemy convoy near Vella Lavella. After skilled evasive manoeuvring at less than 50' above the sea, the Hudson returned to Henderson Field with no casualties.

During the war, they were used as maritime patrol aircraft in the Pacific by the US Navy, the RAAF and the RNZAF.

While running on the surface off Cape Hatteras on 7 July 1942, U-701 was attacked by a Hudson of 396 Sqdn USAAF. She was hit by two bombs and sunk.

They were operated by RAF Special Duties squadrons for clandestine operations; No. 161 Squadron in Europe and No. 357 Squadron in Burma.

A total of 2,584 Hudsons were built. They began to be withdrawn from front line service in 1944.

The type formed the basis for development of the Lockheed Ventura.

Some Hudsons were converted to civil transports after the war. 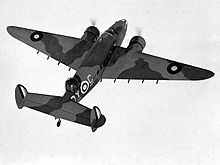 A Hudson I from 11 Squadron, RCAF. 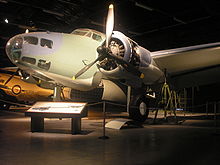 Hudson in the RNZAF Museum.

A Hudson Bomber converted for passenger use after the Second World War and flown by East-West Airlines; it is restored as a Hudson Mk III and is currently located at the Temora Aviation Museum

Australia
RAAF Hudsons can be found at the Temora Aviation Museum, the Australian War Memorial and the RAAF Museum. Other ex-RNZAF and RAAF machines are in private hands. The Hudson at Temora had previously been converted for passenger use and flown by East-West Airlines.

Canada
One complete and several partial Hudsons also exist in Canada. A Lockheed Hudson Mk IIIA (T9422) after years mounted on a pedestal near Washington Street, is on outdoor display at the North Atlantic Aviation Museum, Gander, Newfoundland.

United Kingdom
A Hudson in Royal Australian Air Force colours is preserved in the Royal Air Force Museum at Hendon.