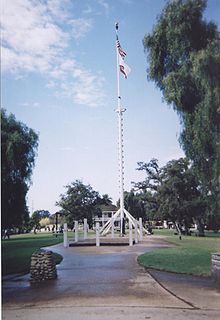 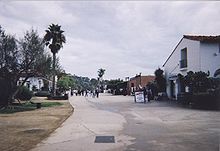 On September 3, 1971, it was added to the National Register of Historic Places as Old Town San Diego Historic District.

The first European settlement on the West Coast of the present-day United States was the San Diego Presidio, a military outpost of Spanish California, founded by Gaspar de Portola in 1769. Mission San Diego de Alcala was founded by Father Junipero Serra the same year. The Presidio and Mission were originally built on a bluff, Presidio Hill, which is now the site of the city-owned Presidio Park and which is immediately adjacent to Old Town State Historic Park. After 5 years the Mission moved to a location several miles upriver. Presidio Hill remained the primary settlement for several decades because it was defensible against attack by European enemies or hostile Indians. As the need for defense decreased, settlers preferred to live at the base of the hill because of greater convenience. In the 1820s the town of San Diego grew up at the base of the bluff, at the site commemorated by Old Town San Diego State Historic Park. The Presidio was abandoned and fell into disrepair.[3]

During the pueblo period following Mexican independence, the Old Town area was the commercial and governmental hub of the region, even though its population was never more than a few hundred. San Diego during this period is vividly described by Richard Henry Dana, Jr. in his classic book Two Years Before the Mast. In 1834 the Mexican government granted San Diego the status of a pueblo or chartered town; however, its pueblo status was revoked in 1838 due to declining population. One problem limiting the town's growth was its location far from navigable water. All imports and exports had to be brought ashore in Point Loma and carried several miles over the La Playa Trail to the town.[4]

When California was admitted to the United States in 1850, San Diego (still largely limited to the Old Town area) was made the county seat of San Diego County, even though the town's population was only 650.[5]

The Old Town area remained the heart of the city of San Diego until the 1860s, when a newcomer to San Diego named Alonzo Horton began to promote development at the site of present-day Downtown San Diego. Residents and businesses quickly abandoned "Old Town" for Horton's "New Town" because of New Town's proximity to shipping. In 1871 government records were moved from Old Town to a new county courthouse in New Town, and Downtown permanently eclipsed Old Town as the focal point of San Diego.[6]

Old Town San Diego State Historic Park preserves and recreates Old Town as it existed during the Mexican and early American periods, from its settlement in 1821, through 1872 when it lost its dominant position to Downtown.

Five original adobes are part of the complex, which includes shops, restaurants and museums. Other historic buildings include a schoolhouse, a blacksmith shop, San Diego's first newspaper office, a cigar and pipe store, houses and gardens, and a stable with a carriage collection. There are also stores, with local artisans demonstrating their craft. There is no charge to enter the state park or any of its museums.

Living history demonstrations and free tours are regularly scheduled. Historical interpretation is primarily carried out by park employees and volunteers, and the Mexican Commercial corner is host to several locally based small businesses and artists.

Adjacent to the state park is Heritage Park Victorian Village, run by San Diego County. It houses seven buildings from the 1880s and 1890s which have been moved there from elsewhere in the city. Also nearby is the Mormon Battalion Monument and Visitor Center. The city-owned Presidio Park, site of the original Presidio of San Diego, is on the adjacent hill. 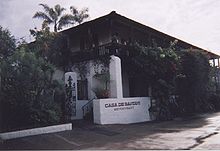 The Old Town area is a popular tourist destination, known especially for its Mexican restaurants. The state park itself hosts several eating establishments, and other restaurants and gift shops are found in the surrounding neighborhood.

The commercial facilities in Old Town State Park, such as restaurants and gift shops, are managed by an outside contractor. For more than 30 years the contractor was Bazaar del Mundo ("bazaar of the world"), run by San Diego businesswoman Diane Powers. In a controversial move, the state park agency did not renew her contract but awarded it to Plaza del Pasado ("plaza of the past"), run by Delaware North Companies, in 2005.[8] The state's goal was to create a more authentic and historically correct understanding and appreciation of life and commerce in San Diego as it was from 1821 to 1872. However, revenue plunged under the new management.[9] In spring 2009, Delaware North withdrew from its contract with the state and management changed hands to the Old Town Family Hospitality Corporation, headed by local restaurateur Chuck Ross.[10] The commercial area is now called Fiesta de Reyes ("festival of the kings").

The Old Town Transit Center serves the area with trolley, bus, Coaster, and occasional Amtrak service. There are free parking lots for the state park and for the transit center.