The Desolation Wilderness is a 63,690-acre (257.7 km2) federally protected wilderness area located along the crest of the Sierra Nevada mountain range, just southwest of Lake Tahoe in El Dorado County, California, United States. It is a popular backpacking destination, with much barren rocky terrain at the edge of the tree line: it has extensive areas of bare granite. Lake Aloha is a feature of the wilderness area, with shallow, clear waters sitting in a wide granite basin carved by glaciers in the last ice age. The Crystal Range is within the wilderness with Pyramid Peak as the highest point in the range and in the wilderness at 9,987 feet (3,044 m) in elevation. Among the many waterfalls within the wilderness is Horsetail Falls. 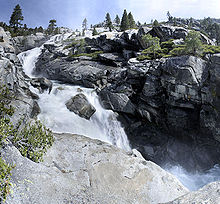 The Crystal Mountains as seen from Desolation Valley near Lake Aloha

The Tahoe Rim Trail and Pacific Crest Trail pass through the wilderness.

Permits are required for both day use and overnight camping. In the summer, a quota system is used to limit the number of visitors on any given day in the wilderness. Desolation Wilderness is one of the most heavily used protected areas in the United States.

The Desolation Wilderness provides a home for many species of plants, fish and wildlife.

The sparse woodlands of widely scattered western junipers and lodgepole pines are interrupted by patches of montaine chaparral species such as Pinemat Manzanita, Huckleberry Oak, and Mountain Pride Penstemon clinging to the expanses of barren rock. There are many wet meadows throughout the wilderness, each unique due to the differences in elevation, exposure, soil composition and soil depth, resulting in a wide diversity of annual and perennial plant life. A variety of wildflower species, sedges, and grasses inhabit these fragile wet areas. Aspen and Willow are common to these wetland areas.

Mule Deer are the largest of the game species found within the wilderness. Black Bears are increasingly common, with individuals being displaced from the Tahoe Basin and lower elevation western slopes into the higher country. More common, yet seldom seen, are the smaller mammals like Coyote, Porcupine, Badger, and Bobcat. Species of special interest that are very rare in the area are the Fisher, Pine Marten, Red Fox, and Wolverine.

Desolation also provides an ideal habitat for numerous alpine rodents such as the Yellow-bellied Marmot, Golden-mantled Ground Squirrel and Douglas Squirrel. Also found is a member of the rabbit and hare family, the Pika. There are also a variety of mountain birds like the Steller's Jay, Clark's Nutcracker, Mountain Chickadee, Sooty Grouse, Mountain Bluebird, American Dipper, occasional Golden Eagle, and others.

Within Desolation's numerous lakes and streams are also a variety of game fish such as the rainbow and brook trout. Excellent fishing can be had at Gilmore Lake. Less common, but also present are brown and golden trout. 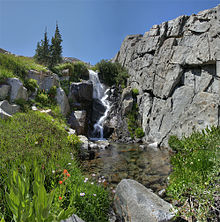 Snow melt drainage on the east side of Pyramid Peak