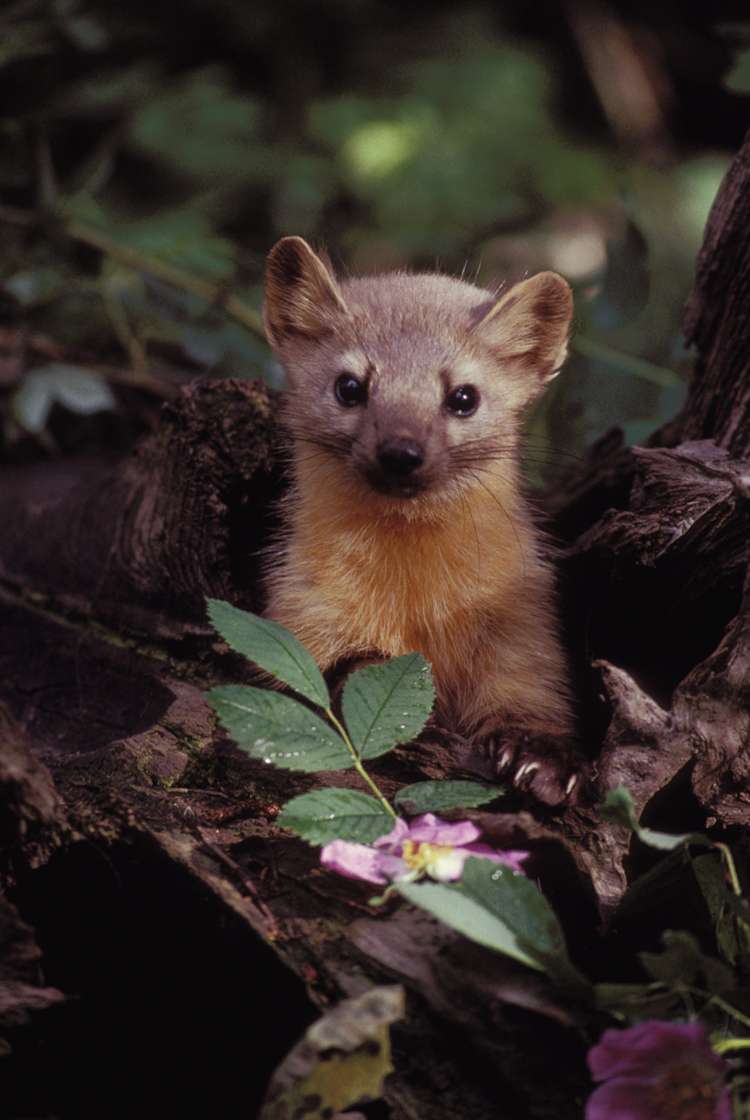 image_width = 250px
regnum = ia
phylum =
classis = ia
ordo =
familia =
genus = ""
species = "M. americana"
binomial = "Martes americana"
binomial_authority = (Turton, )The American marten ("Martes americana") is a n member of the family. Sometimes referred to as the Pine Marten, it should be noted that the term also is used to refer to a separate species from Europe. It differs from the fisher ("Martes pennanti") in that it is smaller in size, has a which is usually brown with an irregularly shaped chest-patch that is lighter in colour.

Some sources believe that the population found in the western should be considered a distinct species and given the scientific name "Martes caurina".

The marten lives in mature coniferous or s in and , and south through the . Trapping and destruction of forest habitat have reduced its numbers, but it is still much more abundant than the larger fisher. The Newfoundland subspecies of this animal ("Martes americana atrata") is considered to be endangered.

The American Marten has a long slender body covered in glossy brownish fur with a lighter coloured throat, a long bushy tail and a pointed snout. Like those of s, its claws are semi-retractable, and aid it in climbing trees. It also has very large foot pads in relation to body weight allowing it to walk on hard snow. This provides the marten with a distinct advantage in areas that receive heavy snows.

The animal is omnivorous, preferring to catch and eat small mammals, especially the ("Tamiasciurus hudsonicus"), but readily consuming fish, frogs, insects, carrion, and fruit and other vegetation when available. It is most active at night, early morning, and late afternoon. It is usually solitary outside of the mating season. Males defend a territory of one to three square miles, and can be very aggressive toward other males. Mating occurs during the summer, but implantation of the fertilized egg is delayed ( [http://animaldiversity.ummz.umich.edu/site/glossary/popup/20020904145359.html] ) and 1 to 5 young "kits" are born the following spring in a den in a hollow tree or rock cavity.

from its natural environment unless its survival is threatened.