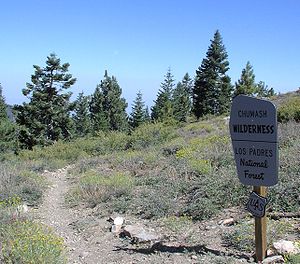 Trailhead into the Chumash Wilderness, immediately west of the summit of Mount Pinos

The Chumash Wilderness is a wilderness area in the mountains of northern Ventura County and southwestern Kern County in California, USA. It is completely within the Los Padres National Forest, and includes most of the highest terrain in Ventura County. Although the mountains in the wilderness are not part of a named range, they are within the larger Coast Ranges of the western United States. The nearest towns are the unincorporated communities of Frazier Park to the east, Lockwood Valley and Cuddy Valley to the south, and the Pine Mountain Club to the north.

The wilderness spans 38,150 acres (154 km²), and extends from just west of the summit of Mount Pinos (8,831 ft/2,692 m) to Cerro Noroeste (Mount Abel) to the west, and south into the badlands north of Lockwood Valley Road. Since Mount Pinos, Cerro Noroeste, and the Pine Mountain Club are developed with paved roads, they did not qualify for inclusion in the wilderness, which wraps partially around them. The highest point in the Chumash Wilderness is Sawmill Mountain, at 8,818 ft (2,688 m).

The wilderness was created by the U.S. Congress in 1992 as part of the Los Padres Condor Range and River Protection Act. The same legislation also established the Sespe, Matilija, Garcia, Machesna Mountain, and Silver Peak wildernesses.

Vegetation within the wilderness includes chaparral at lower elevations, and conifers at higher elevations. Some of the badlands near the southern edge of the wilderness are almost barren of vegetation, and include steep slopes with knife-edge ridges. Snow is frequent from fall until late spring at the highest elevations. Rain is rare in the summer, and fire possible.

Characteristic fauna of the wilderness include black bear, mountain lion, as well as the endangered California condor; the wilderness is at the heart of the historic range of these large scavengers.