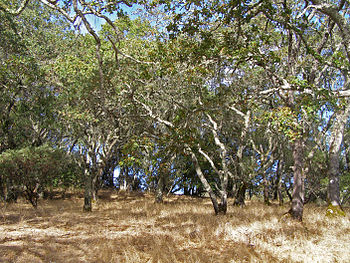 Chino Hills State Park, a significant natural open space preserve and regional park in the Chino Hills, foothills of the Santa Ana Mountains, and is a critical link in the Chino—Puente Hills wildlife corridor, and major botanical habitat reserve for resident and migrating wildlife.

Chino Hills State Park is a place where people can leave urban life for a natural setting. Visitors can walk, horseback ride, or mountain bike on trails through valleys and along ridge tops through woodlands, sage scrub and grasslands. Sixty miles (100 km) of trails and fire roads also offer excellent opportunities for viewing wildlife and native plants. Facilities consist of a picnic area, camping sites, equestrian staging area and corrals, a historic barn, water and restrooms. Most of the trails are multiple mode use. A few trails are designated for hiking only for safety or habitat protection.

Chino Hills Park's 12,452 acres (50.39 km2; 19.46 sq mi) encompass stands of oaks, sycamores and rolling, grassy hills that stretch nearly 31 miles (50 km), from the Santa Ana Mountains to the Whittier Hills encompassing the Puente Hills. Chino Hills is vitally important as a refuge to many species of California native plants, and as a link between natural habitat areas essential to the survival of many animal species. The park is located near the intersection of Orange, Riverside, and San Bernardino Counties.

Over the centuries, many people have made use of the open spaces and plentiful water, plant and animal resources of the Chino Hills. Prior to European contact, the Tongva-Gabrieliño Indians, who lived in settlements along the Santa Ana River basin for 8,000 years, set up temporary camps in the hills for gathering acorns, elderberries, walnuts and other seeds.[1]

After the Spanish founded Mission San Gabriel in 1771, the Chino Hills were used extensively for grazing by mission cattle. During the Mexican Republic era, the hills were used as spillover grazing from such surrounding Mexican ranchos as Santa Ana del Chino and La Sierra Yorba. After Mexico ceded California to the United States in 1848, the land was still used primarily for grazing.

Private land acquisition began in the 1870s and continued into the 1890s. In 1848, the 1,720 acre (7 km²) Rolling M Ranch was established and the land leased to nearby landowners for cattle grazing. Some late nineteenth and early twentieth century oil exploration and mining activity also took place in the northwestern section of what is now the park. A ranch house, barn, and several windmills and watering troughs serve as reminders of the cattle ranching days.

In 1977, the California legislature passed a resolution directing California State Parks to conduct a study on acquiring Chino Hills land for park purposes. A local citizen group, 'Hills for Everyone', worked closely with California State Parks and the legislature to create the park with an initial acquisition of 2,237 acres (9 km²). In 1984, the State Park and Recreation Commission officially declared the area a unit of the State Park System. Since that date Chino Hills State Park has been expanded by numerous land acquisitions from various private landowners.

The park is located 10 miles (16 km) northwest of Corona, and lies almost entirely in the city of Chino Hills in the southwest corner of San Bernardino County. Small parts of it spill over into Yorba Linda in northeastern Orange County, and into extreme western Riverside County, near Corona.

Highway 71 to Soquel Canyon west. Proceed to Elinvar and turn left. The Chino Hills State Park entrance is on the right at Sapphire and Elinvar.

One can enter the park, at the South Ridge Trail trailhead, from the residential Rim Crest street, off Fairmont Blvd. in Yorba Linda. Street parking is available on Rim Crest between 8:00 a.m. and 9:00 p.m., parking on residential Blue Gum street at the end of Rim Crest is prohibited except by permit. The park closes at sunset. It is not possible to see the actual trail entrance from Rim Crest, which is a small gate and welcome board, one walks around the corner via the dirt path next to the large gas pipeline to enter.

If one heads eastbound on the South Ridge trail, which would be to the right of the welcome sign, there is a quick incline that offers spectacular views on clear days of, among other things, various neighborhoods in Yorba Linda, San Antonio City Park, Disneyland, Downtown L.A., Knott's Berry Farm, the Santa Ana River, the 91 freeway, the Santa Ana River fishing lakes, the beach, the ocean, and Catalina Island.[citation needed]