The rainbow trout (Oncorhynchus mykiss) is a species of salmonid native to tributaries of the Pacific Ocean in Asia and North America. The steelhead is a sea run rainbow trout (anadromous) usually returning to freshwater to spawn after 2 to 3 years at sea. In other words, rainbow trout and steelhead trout are the same species. The fish are often called salmon trout.[1] Several other fish in the salmonid family are called trout, some are anadromous like salmon, whereas others are resident in freshwater only.[2]

The species has been introduced for food or sport to at least 45 countries, and every continent except Antarctica. In some locations, such as Southern Europe, Australia and South America, they have negatively impacted upland native fish species, either by eating them, outcompeting them, transmitting contagious diseases, (like Whirling disease transmitted by Tubifex) or hybridization with closely related species and subspecies that are native to western North America.[3][4] 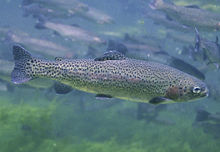 The species was originally named by Johann Julius Walbaum in 1792 based on type specimens from Kamchatka. Richardson named a specimen of this species Salmo gairdneri in 1836, and in 1855, W. P. Gibbons found a population and named it Salmo iridia, later corrected to Salmo irideus, however these names faded once it was determined that Walbaum's type description was conspecific and therefore had precedence (see e.g. Behnke, 1966).[5] More recently, DNA studies showed rainbow trout are genetically closer to Pacific salmon (Onchorhynchus species) than to brown trout (Salmo trutta) or Atlantic Salmon (Salmo salar), so the genus was changed.

Unlike the species' former name's epithet iridia (Latin: rainbow), the specific epithet mykiss derives from the local Kamchatkan name 'mykizha'; all of Walbaum's species names were based on Kamchatkan local names.

The ocean going (anadromous) form (including those returning for spawning) are known as steelhead, (Canada and the United States) or ocean trout (Australia), although they are the same species. 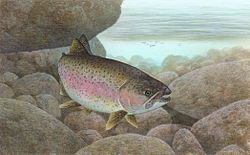 Illustration of a rainbow trout

Like salmon, steelhead are anadromous: they return to their original hatching ground to spawn. Similar to Atlantic salmon, but unlike their Pacific Oncorhynchus salmonid kin, steelhead are iteroparous (able to spawn several times, each time separated by months) and make several spawning trips between fresh and salt water. The steelhead smolts (immature or young fish) remain in the river for about a year before heading to sea, whereas salmon typically return to the seas as smolts. Different steelhead populations migrate upriver at different times of the year. "Summer-run steelhead" migrate between May and October, before their reproductive organs are fully mature. They mature in freshwater before spawning in the spring. Most Columbia River steelhead are "summer-run". "Winter-run steelhead" mature fully in the ocean before migrating, between November and April, and spawn shortly after returning. The maximum recorded life-span for a rainbow trout is 11 years.[6]

Rainbow trout are predators with a varied diet, and will eat nearly anything they can grab. Their image as a selective eater is only a legend. Rainbows are not quite as piscivorous or aggressive as brown trout or lake trout (char). Young rainbows survive on insects, fish eggs, smaller fish (up to 1/3 of their length), along with crayfish and other crustaceans. As they grow, though, the proportion of fish increases in most all populations. Some lake dwelling lines may become planktonic feeders. While in flowing waters populated with salmonids, trout eat varied fish eggs, including salmon, cutthroat trout, as well as the eggs of other rainbow trout, alevin, fry, smolt and even left-over carcasses. 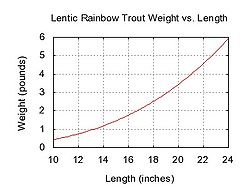 Steelhead trout populations have declined due to human and natural causes. Steelhead (Oncorhynchus mykiss) historically occurred around the North Pacific Ocean from northwestern Mexico in North America to eastern Russia in Asia.[8]

Several studies have shown that almost all California coastal steelhead are of native origin, despite over a century of hatchery stocking. Genetic analysis shows that South Central California Coast (SCCC) Distinct population segment (DPS) and Southern California (SC) DPS from Malibu Creek north, and including the San Gabriel River, Santa Ana River and San Mateo Creek, are not hatchery strains. However, steelhead from Topanga Creek and the Sweetwater River were partly, and from San Juan Creek completely, of hatchery origin.[8] Genetic analysis has also shown that steelhead in the streams of the Santa Clara County and Monterey Bay basins are not of hatchery origin, including the Coyote Creek, Guadalupe River, Pajaro River, Permanente Creek, Stevens Creek, San Francisquito Creek, San Lorenzo River, and San Tomas Aquino Creek basins.[10] Natural waterfalls and two major dams have isolated Russian River anadromous steelhead from its non-ocean going rainbow trout form above the impassable barriers, however a recent genetic study of fin samples collected from steelhead at 20 different sites both above and below passage barriers in the watershed found that despite the fact that 30 million hatchery trout were stocked in the river from 1911 to 1925, the steelhead remain of native and not hatchery stock.[11]

The U.S. National Marine Fisheries Service has identified 15 populations, called Distinct Population Segments(DPSs), in Washington, Oregon and California.[13][14] Eleven of these DPSs are listed under the U.S. Endangered Species Act (ESA).[15] One DPS on the Oregon Coast is designated a U.S. Species of Concern. Species of Concern are those species that lack sufficient data to determine whether to list the species under the ESA.

In 2010, the Oregon Department of Fish & Wildlife hatchery expects to more than double its take over 2009. The 2009 population grew 60% over 2008. Hatchery-taken fish will spawn tens of thousands of juvenile "smolts" that will be released to swim downstream and mature in the Pacific.[17]

In March 2010, the Los Angeles Times reported that the New Zealand mud snail had infested watersheds in the Santa Monica Mountains, complicating efforts to improve stream-water quality for the steelhead. According to the article, the snails have expanded "from the first confirmed sample in Medea Creek in Agoura Hills to nearly 30 other stream sites in four years." Researchers at the Santa Monica Bay Restoration Commission believe that the snails' expansion may have been expedited after the mollusks traveled from stream to stream on the gear of contractors and volunteers.[18]

Rainbow trout and steelhead are both highly desired food and sportfish. A number of angling methods are common. Rainbow trout are a popular target for fly fishers. Spinners, spoons, and small crankbaits can also be used productively, either casting or trolling. Rainbow trout can also be caught on live bait; nightcrawlers, trout worms, and minnows are popular and effective choices. The IGFA recognizes the world record for Rainbow Trout was caught on Saskatchewan's Lake Diefenbaker by Sean Konrad on September 5 2009. The fish weighed 48 lb 0 oz (21.77 kg).

Rainbow trout, cleaned and iced, in a fish market in Western Australia

The first rainbow trout hatchery was established on San Leandro Creek, a tributary of San Francisco Bay, in 1870 with trout production beginning in 1871. The hatchery was stocked with the locally native rainbow trout, and likely steelhead. The fish raised in this hatchery were shipped to hatcheries out of state for the first time in 1875, to Caledonia, New York[disambiguation needed

] and then in 1876 to Northville, Michigan. In 1877, another rainbow trout hatchery was established on Campbell Creek, a McCloud River tributary. However, the McCloud River stock indiscriminately mixed rainbow trout with Redband trout (Oncorhynchus mykiss stonei).[20]

They are farmed in many countries throughout the world. Since the 1950s commercial production has grown exponentially,[21] particularly in Europe and recently in Chile. Worldwide, in 2007, 604,695 tonnes (595,145 long tons; 666,562 short tons) of farmed salmon trout were harvested with a value of 2.589 billion US dollars.[22] The largest producer is Chile. In Chile and Norway, ocean cage production of steelhead has expanded to supply export markets. Inland production of rainbow trout to supply domestic markets has increased in countries such as Italy, France, Germany, Denmark and Spain. Other significant producing countries include the USA, Iran, Germany and the United Kingdom.[22]

There are tribal commercial fisheries for steelhead in Puget Sound, the Washington Coast and in the Columbia River. 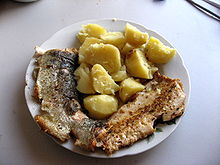 Rainbow trout is popular in Western cuisine and is caught wild and farmed. It has tender flesh and a mild, somewhat nutty flavor. However, farmed trout and those taken from certain lakes have a pronounced earthy flavor which many people find unappealing; many shoppers therefore ascertain the source of the fish before buying. Wild rainbow trout that eat scuds (freshwater shrimp), insects such as flies, and crayfish are the most appealing. Dark red/orange meat indicates that it is either an anadromous steelhead or a farmed Rainbow trout given a supplemental diet with a high astaxanthin content. The resulting pink flesh is marketed under monikers like Ruby Red or Carolina Red.

Steelhead meat is pink like that of salmon, and is more flavorful than the light-colored meat of rainbow trout.[25]

The sperm of rainbow trout contains protamine, which counters the anticoagulant heparin. Protamine was originally isolated from fish sperm, but is now produced synthetically.

A few populations are recognized as subspecies: