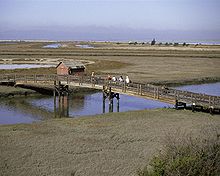 Don Edwards San Francisco Bay National Wildlife Refuge (DESFBANWR) is a US National Wildlife Refuge located in the southern part of San Francisco Bay, California. The Refuge headquarters and visitor center is located in the Baylands district of Fremont, next to Coyote Hills Regional Park, in Alameda County. The visitor center is on Marshlands Rd, off Thornton Ave. See pdf of DESFBANWR Pamphlet with Map under External Links below.

Most of the refuge stretches along the marshy shoreline north and south of the Dumbarton Bridge, but Bair Island, in San Mateo County, is also part of the system. The southernmost extent of the refuge is in northern Santa Clara County.

It was founded in 1974 as the first urban National Wildlife Refuge established in the United States, and it is dedicated to preserving and enhancing wildlife habitat, protecting migratory birds, protecting threatened and endangered species, and providing opportunities for wildlife-oriented recreation and nature study for the surrounding communities.

As of 2004, the Refuge spanned 30,000 acres (120 km2) of open bay, salt pond, salt marsh, mudflat, upland and vernal pool habitats located throughout south San Francisco Bay. About 9,000 acres (36 km2) of salt ponds within the refuge are managed by Cargill Salt, which has perpetual salt-making rights. Cargill uses the salt ponds to concentrate brines as part of its solar salt operation which produces salt for food, agriculture, medical, and industrial uses throughout the Western United States.

Located along the Pacific Flyway, the Refuge hosts over 280 species of birds each year. The variety of birds that may call the refuge home or as a stopover consist of the white pelicans, kites, hawks, ospreys, and eagles. Millions of shorebirds and waterfowl stop to refuel at the Refuge during the spring and fall migration. In addition to its seasonal visitors, the Refuge provides critical habitat to resident species like the endangered California Clapper Rail and salt marsh harvest mouse. Today, hundreds of thousands of people visit the Refuge each year to enjoy its diverse wildlife and habitats.