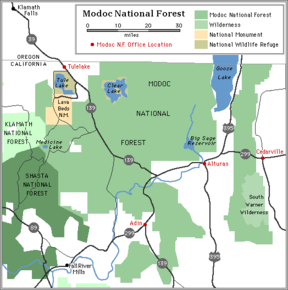 Map of the Modoc National Forest

Modoc National Forest is a 1,654,392-acre (6,695 km2) national forest in northeastern California, covering parts of Modoc (82.9% of forest), Lassen (9.4%), and Siskiyou (7.7%) counties. Most of the forest was covered by an immense lava flow millions of years ago. The eastern part of the forest east of Alturas contains a spur of the Cascade Range to the north known as the Warner Mountains. The Warner Mountains drop steeply on the eastern slopes, whereas the western flank has a more gentle topography.

The western side of the brushy foothills consist mostly of bitterbrush and curl-leaf mahogany. As elevation increases, forests of ponderosa pine, white and red firs, incense cedar, and aspen give way to lodgepole and western white pines sprinkle towards the summit. A thorough list of plants may be found in List of plants on the Modoc National Forest. Some 43,400 acres (176 km2) of the forest have been identified as old growth, with lodgepole pine, ponderosa pine, white fir, incense cedar, and red fir being common constituents.[1] Forest headquarters are located in Alturas, California. There are local ranger district offices located in Adin, Alturas, Cedarville, and Tulelake.

Modoc National Forest was established as the Modoc Forest Reserve on November 29, 1904 by the General Land Office. It was named for the Modoc people who traditionally had their territory in this area. In 1905 federal forests were transferred to the U.S. Forest Service, and on March 4, 1907 they became National Forests. On July 1, 1908 Warner Mountains National Forest was added to Modoc.[2]