Sequoia National Park is a national park in the southern Sierra Nevada east of Visalia, California, in the United States. It was established on September 25, 1890. The park spans 404,051 acres (1,635 km2). Encompassing a vertical relief of nearly 13,000 feet (4,000 m),[1] the park contains among its natural resources the highest point in the contiguous 48 United States, Mount Whitney, at 14,505 feet (4,421 m) above sea level. The park is south of and contiguous with Kings Canyon National Park; the two are administered by the National Park Service together.

The park is famous for its giant sequoia trees, including the General Sherman tree, the largest tree on Earth. The General Sherman tree grows in the Giant Forest, which contains five out of the ten largest trees in the world. The Giant Forest is connected by the Generals Highway to Kings Canyon National Park's General Grant Grove, home to the General Grant tree among other giant sequoias. The park's giant sequoia forests are part of 202,430 acres (81,921 ha) of old-growth forests shared by Sequoia and Kings Canyon National Parks.[3] Indeed, the parks preserve a landscape that still resembles the southern Sierra Nevada before Euro-American settlement.[4]

At higher elevations in the front country, between 5,500 and 9,000 feet (1,700 and 2,700 m) in elevation, the landscape becomes montane forest-dominated coniferous belt. Found here are Ponderosa, Jeffrey, sugar, and lodgepole pine trees, as well as abundant white and red fir. Found here too are the mighty giant sequoia trees, the most massive living single-stem trees on earth. Between the trees, spring and summer snowmelts sometimes fan out to form lush, though delicate, meadows. In this region, visitors often see mule deer, Douglas squirrels, and American black bears, which sometimes break into unattended cars to eat food left by careless visitors. 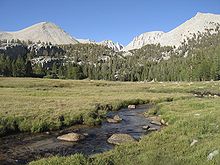 The vast majority of the park is roadless wilderness; in fact, to the surprise of many visitors, no road crosses the Sierra Nevada within the park's boundaries. 84% of Sequoia and Kings Canyon National Parks is designated as Wilderness[6] and is accessible only by foot or by horse.

Sequoia's backcountry offers a vast expanse of high-alpine wonders. Covering the highest-elevation region of the High Sierra, the backcountry includes Mount Whitney on the eastern border of the park, accessible from the Giant Forest via the High Sierra Trail. On a traveler's path along this 35-mile (56 km) backcountry trail, one passes through about 10 miles (16 km) of montane forest before reaching the backcountry resort of Bearpaw Meadow, just short of the Great Western Divide. Bearpaw Meadow offers rustic tent cabins and gourmet meals cooked by a seasonal resident park crew.

Continuing along the High Sierra Trail over the Great Western Divide via Kaweah Gap, one passes from the Kaweah River Drainage, with its characteristic V-shaped river valleys, and into the Kern River drainage, where an ancient fault line has aided glaciers in the last ice age to create a U-shaped canyon that is almost perfectly straight for nearly 20 miles (32 km). On the floor of this canyon, at least 2 days hike from the nearest road, is the Kern Canyon hot spring, a popular resting point for weary backpackers. From the floor of Kern Canyon, the trail ascends again over 8,000 ft (2,400 m) to the summit of Mount Whitney. At Mount Whitney, the High Sierra Trail meets with the John Muir Trail and the Pacific Crest Trail, which continue northward along the Sierra crest and into the backcountry of Kings Canyon National Park. 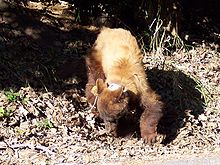 American Black Bear, marked with a tracking collar. This bear has most likely been fed by visitors and is being monitored by the National Park Service to make sure it returns to its natural habits.

The area which now comprises Sequoia National Park was first home to Monachee (or Western Mono) Native Americans, who resided mainly in the Kaweah River drainage in the Foothills region of the park, though evidence of seasonal habitation exists even as high as the Giant Forest. In the summertime, Native Americans would travel over the high mountain passes to trade with tribes to the East. To this day, pictographs can be found at several sites within the park, notably at Hospital Rock and Potwisha, as well as bedrock mortars used to process acorns, a staple food for the Monachee people.

By the time the first European settlers arrived in the area, smallpox had already spread to the region, decimating Native American populations. The first European settler to homestead in the area was Hale Tharp, who famously built a home out of a hollowed-out fallen giant sequoia log in the Giant Forest next to Log Meadow. Tharp allowed his cattle to graze the meadow, but at the same time had a respect for the grandeur of the forest and led early battles against logging in the area. From time to time, Tharp received visits from John Muir, who would stay at Tharp's log cabin. Tharp's Log can still be visited today in its original location in the Giant Forest.

However, Tharp's attempts to conserve the giant sequoias were at first met with only limited success. In the 1880s, white settlers seeking to create a utopian society founded the Kaweah Colony, which sought economic success in trading Sequoia timber. However, Sequoia trees, unlike their coast redwood relatives, were later discovered to splinter easily and therefore were ill-suited to timber harvesting, though thousands of trees were felled before logging operations finally ceased.

The National Park Service incorporated the Giant Forest into Sequoia National Park in 1890, the year of its founding, promptly ceasing all logging operations in the Giant Forest. The park has expanded several times over the decades to its present size; one of the most recent expansions occurred in 1978, when grassroots efforts, spearheaded by the Sierra Club, fought off attempts by the Walt Disney Corporation to purchase a high-alpine former mining site south of the park for use as a ski resort. This site was annexed to the park to become Mineral King, the highest-elevation developed site within the park and a popular destination for backpackers.

The park is home to over 240 known caves, and potentially hundreds more. The caves in the park include California's longest cave at over 20 miles (32 km), Lilburn Cave, as well as recently discovered caves that remain strictly off-limits to all but a handful of specialists who visit on rare occasions to study cave geology and biology. The only cave open to park visitors remains Crystal Cave, the park's second-longest at over 3.4 miles (5.5 km) and remarkably well-preserved for the volume of visitation it receives annually. It was discovered on April 28, 1918 by Alex Medley and Cassius Webster.[7] The cave is a constant 9 °C (48 °F), and only accessible by guided tour.

In 2003, the Sequoia National History Association (SNHA) created the Protect Sequoia Caves Program after vandals damaged areas at the entrance to Crystal Cave.[8]

Park caves, like most caves in the Sierra Nevada of California, are mostly solution caves dissolved from marble. Marble rock is essentially limestone that was metamorphosed by the heat and pressure of the formation and uplift of the Sierra Nevada Batholith (ca. 50-10 million years ago). The batholith's rapid uplift over the past 10 million years led to a rapid erosion of the metamorphic rocks in the higher elevations, exposing the granite beneath; therefore, most Sierra Nevada caves are found in the middle and lower elevations (below 7,000 ft/2,100 m), though some caves are found in the park at elevations as high as 10,000 ft (3,000 m) such as the White Chief cave in Mineral King. These caves are carved out of the rock by the abundant seasonal streams in the park; most of the larger park caves currently have or have had sinking streams running through them.

Caves are discovered every year in the park; in fact, 17 have been discovered since 2003 alone. The most recently discovered major cave in the park, in September 2006, has been named Ursa Minor.[9] Park caves are valued by scientists and cavers alike for their pristine beauty, variety, and endemic cave life. 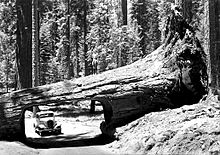 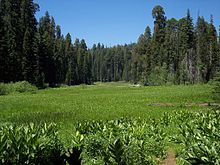 Crescent Meadow in the Giant Forest, called by John Muir the "Gem of the Sierra" 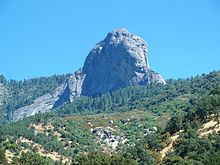 View of Moro Rock from Potwisha, near Hospital Rock

In addition to hiking, camping, fishing, and backpacking, the following attractions are highlights with many park visitors: