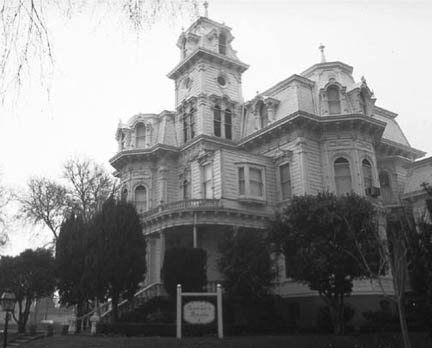 Governor's Mansion State Historic Park is the location of Historic Governor's Mansion of California, the former official home of the . The mansion is listed on the . Located at 1526 H Street in Sacramento, the mansion no longer serves as the Governor's official residence and is now used primarily for public and state ceremonies and events. was the first governor to live in the house; was the last.

The thirty-room - style Victorian mansion was built in 1877 for local hardware merchant Albert Gallatin. The State of California purchased the house in 1903 to serve as a governor's mansion. Many furnishings remain from former governors, including Pardee's 1902 piano, velvet chairs and sofas belonging to Governor , and bought by Governor .

The house is now open to the public for guided tours, which are held daily on the hour, from 10 a.m. to 4 p.m.

The state built a new governor's residence in the Sacramento suburb of Carmichael, which was completed just as Reagan left office. Then governor, , refused to live in the house, which was then sold by the state in 1982. Brown's successors -- , , and -- lived in a Carmichael residence that was bought for Deukmejian by a group of his supporters and rented to the state for $1 a year. The present governor, , stays in a hotel suite near the Capitol when he is in Sacramento, but ordinarily commutes each day by private plane from his home in the Brentwood area of Los Angeles [http://www.sacbee.com/110/story/772916.html] .

Governor's Mansion State Historic Park is one of the 48 California state parks proposed for closure in January 2008 by California's Governor as part of a deficit reduction program. [ [http://cbs5.com/local/California.parks.budget.2.627476.html CBS5.com: List Of Calif. Parks To Close In Budget Proposal] ]