Native Americans used the survey area for hunting and fishing and had permanent dwelling sites. Two Native American tribes were in constant conflict. The Dakota (Sioux) were being pushed from their home area by the Ojibwa (Chippewa) during the late 18th century and early 19th century. Burial mounds and artifacts can still be found. Some of the oldest remains of Native Americans were found near Pelican Rapids, Minnesota. The remains, nicknamed Minnesota Girl, were dated at about 11,000 B.C. (Otter Tail County Historical Museum).

The first white men to enter the county were French and British fur traders. Efforts were made to set up trading posts on the Leaf Lakes and Otter Tail Lake. In the late 19th century, most of the towns were built along the railroad lines. Lumber and agriculture were the major industries in the county at that time. The pine and hardwood forests, transportation system, and markets were instrumental in the development of Fergus Falls into a lumber center.

In 1870, the population of the county was about 2,000. At that time the principal languages spoken in the county were Norwegian, Swedish, German, and English. Otter Tail County was established in March 1858 by a legislative act. It was organized in 1868. The original county seat was Ottertail City.

The following public-use airports are located in Otter Tail County: 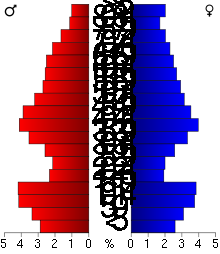 In the U.S. presidential elections, Otter Tail County has mainly been a Republican county.

During the time period of the Great Depression, however, there was actually a communist faction within the county. The areas where the movement was centered in the county are quite desolate today, however, during mid-1932, the worst possible time for farmers, there were over 900 members involved with one of the state's communist organizations.[6] “The members of the communist party were very active in the New York Mills area of Newton, Leaf Lake, Blowers, Deer Creek and Paddock Townships. They held meetings, recruited members, placed candidates on local and state tickets, and distributed propaganda. They held dances in Heinola, Menahga, and Sebeka where the Soviet hammer and sickle was proudly displayed and ran a summer camp on East Leaf Lake.”[6] Heinola is a ghost town today. The low activity and population among these areas today suggests that they were set up by outsiders during the Depression. When the communist movement died out, so did much of the activity and population has been on the decline ever since. This leads to the idea that the most of Otter Tail had strongly conservative roots; the few "communists" in the area were farmers under the influence of outsiders.

By the time Franklin D. Roosevelt implemented some of the New Deal programs in the county, most of the communist movement began to lose all its steam. In addition, the Winter War in Europe between Finland and the U.S.S.R. soured the taste of communism to many Finnish immigrants (the Fins were a major denomination among the communists at the time). Carl Peltoniemi, a former supporter of the organization, said, “The communist movement within the Finnish community basically ended at the start of the Winter War in 1939-1940.”

In the Minnesota House of Representatives, Otter Tail County is divided into two districts. District 10A and District 10B. Both are represented by Republicans Bud Nornes (10A) and Mark Murdock (10B). Both Nornes and Murdock won the 2008 state House elections with more than 50% of the vote. Districts 10A and 10B make up the Minnesota State Senate district 10, which is represented by Republican State Senator Gretchen Hoffman. Senator Hoffman won the 2010 election with just under 55% of the votes. 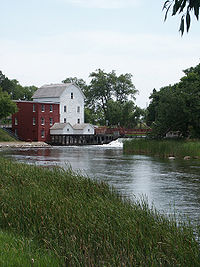 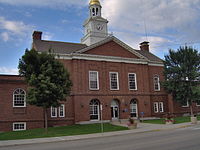 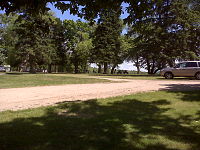 This is a scene of one of Glendalough State Park's picnic and beach areas. The park is close to Battle Lake, Otter Tail County. Photo by James Benjamin Bleeker. 18 July 2010

† a part of Rothsay extends into Wilkin County.
‡ Wadena is in Wadena County, but a small part of the city extends into Otter Tail County.