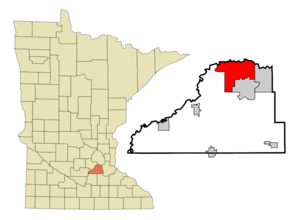 mapsize = 250px
map_caption = Location in Scott County and the state of

Shakopee (pronEng|ˈʃɑːkəpi "SHOCK-a-pi") is a 17 miles (26 km) southwest of downtown in the of and is the of Scott County. Located on the south bank bend of the , Shakopee and nearby suburbs comprise the southwest portion of , the sixteenth largest in the . The estimate for the population of the City of Shakopee in 2006 was 29,335.

Ancient and modern, the city was once the village of of the Dakota and native burial mounds along the river bank are estimated to be over 2,000 years old. Later the city boomed during the 19th century as a commerce exchange site between river and rail at Murphy's Landing. Today it is home to two of the metro's largest attractions, Valleyfair! and the racetrack. The is associated with Shakopee though it is located in nearby Louisville Township.

A growing bedroom community, the city is connected to the metro area by and County Highway 101.

Records indicate that a Dakota Indian village was located east of the present day city of Shakopee. The village was called Teen-tah-o-tan-wa, “village of the prairie”, and was the home of summer bark lodges, winter s and cornfields. The acted as a natural and beautiful boundary with the to the north. The tribal leader of Teenatahotonwa was Chief Shakopee (pronounced Shah-kPa-dan or Shakpay). The City of Shakopee is named for him. The burial mounds near the Minnesota River are a reminder of the length of Indian presence and the rich heritage and tradition of the city’s original inhabitants. The mounds, estimated at over 2,000 years old, are located in Memorial Park in Shakopee.

There were 7,540 households out of which 38.9% had children under the age of 18 living with them, 58.2% were married couples living together, 8.6% had a female householder with no husband present, and 28.9% were non-families. 21.0% of all households were made up of individuals and 5.7% had someone living alone who was 65 years of age or older. The average household size was 2.66 and the average family size was 3.12.

Shakopee is home to Gayle Quinnell, a 75-year-old woman who made national news by calling an at a rally. Asked to elaborate, Quinnell stated that his father was a Muslim and that Obama "had Muslim in him."

Shakopee was mentioned in the 2006 film when a character said she once went to Shakopee for "the crazy days".