Progressivism is a term that refers to a broad school of international social and political philosophies. Politically speaking, "progressivisms" can be described as being socially liberal. The term "progressive" entered the lexicon of liberal thinking in late 19th century America, in reference to a more general response to the vast changes wrought by industrialization: an alternative to both the traditional conservative response to social and economic issues and to the various more or less radical streams of and which opposed them. Political parties, such as the Progressive Party, organized at the start of the 20th century, and progressivism made great strides under American presidents , , , and . [cite web | last = | first = | authorlink = | coauthors = | year = | url =http://www.bartleby.com/65/pr/progrsvsm.html | title =Progressivism | format = | work = | publisher =The Columbia Encyclopedia, Sixth Edition. 2001-05. | accessdate =2006-11-18]

U.S. progressivism historically advocates the advancement of labor rights and . The progressives were early proponents of anti-trust laws, regulation of large corporations and monopolies, as well as government-funded and the creation of s and Wildlife Refuges.

;Canada: Western Canada at the turn of the 20th century began to receive an influx of political ideas. From the United States came progressivism. The was founded in 1920 by , a former Minister of Agriculture in the Unionist government of . Crerar quit the Borden cabinet in 1919 because Minister of Finance Thomas White introduced a budget that did not pay sufficient attention to farmers' issues. Crerar became the first leader of the Progressive Party, and led it to win 65 seats in the 1921 general election, placing second, ahead of the well-established Conservative Party. The Progressives also had a close alignment with the provincial parties in several provinces. However, the Progressives were not able to hold their caucus together well, and progressive-leaning MPs and voters soon deserted the Progressives for the Liberals and the economically socialist (later the ).

Dating back to 1854, Canada's oldest political party was the Conservative Party. However following that party's disasterous showing in the 1935 election, held during the depths of the Great Depression, the party was leaderless and lacked new ideas. The party drafted Premier , a long-time leader of that province's progressive "United Farmers" party, who agreed to become leader of the Conservatives on condition that the party add "Progressive" to its name. The party adopted the name "," which it kept until its dissolution in 2003. Despite the name change most progressives contintued to support other parties, although the PCs also contained a progressive wing for the rest of its history. Most of these people were opposed to the PCs merger with the more socially conservative in 2003. 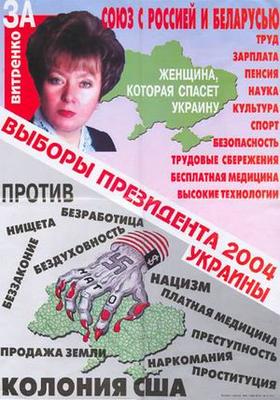 thumb|_'s 2004 election poster.] The ("Prohresivna Sotsjalistychna Partiya Ukrayiny/Progressivnaya Sotsialističeskaja Partiya Ukrajiny", Прогресивна соціалістична партія України) is a in , created by a flamboyant former member of in 1995. Progressive Socialist Party of Ukraine is a left-wing party that supports integration with and as an alternative to the EU. PSPU traditionally campaigns on an anti-NATO, anti-IMF and pro-Russian platform. During the 1998 parliamentary elections the party won 4 % of the vote, and its candidate for the 1999 presidential elections, , came 4th, with 10.97% of the vote in the first round.

At the elections, 30 March 2002, the party established the Nataliya Vitrenko Bloc alliance, including the "Partija Osvitjan Ukrajiny". It won 3.22% of the votes, little short of passing the 4% threshold needed to enter the . PSPU was a vocal opponent of President but supported , Ukrainian prime minister since 2002, during the 2004 elections. After the of 2004, the party joined the opposition to new president in a coalition with the "" (State) party led by former Ukrainian prosecutor .In the March 2006 parliamentary elections, the party again failed to gain any seats in Parliament, participating as . At the 2007 parliamentary elections the party failed once more to enter the parliament.

While the term "progressive" is not as popular in most parts of Asia as it is in North America and Europe, there are political parties and organizations that advocate for many of the tenets of progressivism, such as the .;China : In the (PRC), individuals are elected to government via a series of indirect elections in which one people's congress appoints the members of the next higher congress, and in which only the lowest people's congresses are subject to direct popular vote. This means that although independent members can theoretically, and occasionally in practice, get elected to the lowest level of people's congresses, it is impossible for them to organize to elect members to the next higher people's congress without the approval of the ruling party, or to even exercise oversight over executive positions at the lowest level in the hierarchy. This lack of effective power also discourages outsiders from contesting the people's congress elections even at the lowest level. As well, control is often maintained over the civilian population through regulation of information, and (see ). These aspects of China's government run counter to many of the fundamental tenets of progressivism, and thus there is no major contemporary progressive party in power there. [Boum, Aomar (1999). [http://dizzy.library.arizona.edu/ej/jpe/volume_6/goodmanonoivol6.htm Journal of Political Ecology: Case Studies in History and Society] . Retrieved April 18, 2006.] In 1998, Chinese activists formed the which advocated for progressive government reforms. Since then, founding members of the party, such as , have been rounded up and imprisoned by the Chinese government for allegedly "subverting the state". [Zha, Jianying "Enemy of the State", "The New Yorker" (April 23, 2007)]

;India :In there are a large number of political parties which exist on either a state-wide or national basis. The , as the current ruling political alliance in India, comprises leftist political parties which lean towards socialism and/or . Thus, the definition of "progressivism" may be interpreted differently in India, as communism was not a branch of thought that played any major role in the original western progressive movement. Furthermore, on a social level the leftist parties in India do not espouse policies that would be considered progressive in the West, though policies in regards to caste system, worker's rights, and women's rights are far more progressive than the non-progressive Indian parties which often appeal to Hindu fundamentalism based in a sense of a thousand year injustice against Hindus by outsiders. The alliance is externally supported (supporters are not part of the government) by the four main leftist parties; , , Revolutionary Socialist Party and . In order to coordinate the cooperation, a has been formed. The is currently the chief member of the United Progressive Alliance coalition.

;Australia :In the past few years in Australia, the term "progressive" has been used to refer to what used to be called "The Third Way". The term is popular in Australia, and is often used in place of "social liberal". The term "liberalism" has become associated with free markets, small government, and personal freedom; in other words "". Progressivism, however, means in part advocating big government that does not involve central planning. [ [http://www.sauer-thompson.com/archives/philosophy/2007/03/progressivism.html Gary Sauer-Thompson weblog 3-17-07] ]

;New Zealand :The current Prime Minister of New Zealand - Helen Clark, leader of the Labour Party - announced in 2005 that she had come to a complex arrangement that led to a formal coalition consisting of the Labour Party and , the 's MP. A further arrangement has been made with the Green Party, which has given a commitment not to vote against the government on confidence and supply.

formed the Progressive Party after splitting from the Alliance Party. The Progressive Party states a particular focus on the creation of jobs, and has said that it is committed to achieving full employment. They seek to raise the legal age of alcohol consumption to 20. They are pro-environment, and list free education and free healthcare as other policy objectives. [cite web | last = | first = | authorlink = | coauthors = | year = | url =http://www.progressive.org.nz/modules.php?name=Content&pa=showpage&pid=111 | title =Policies | format = | work = | publisher =New Zealand Progressive Party | accessdate =2006-11-16]

The Progressive Green Party was formed in 1995 but has now disbanded.

Relation to other political ideologies

The term "progressive" is today often used in place of "liberal". Although the two are related in some ways, they are separate and distinct political ideologies. According to John Halpin, senior advisor on the staff of the , "Progressivism is an orientation towards politics, It's not a long-standing ideology like liberalism, but an historically-grounded concept... that accepts the world as dynamic." Progressives see progressivism as an attitude towards the world of politics that is broader than conservatism vs. liberalism, and as an attempt to break free from what they consider to be a false and divisive dichotomy. [cite web | last = | first = | authorlink = | coauthors = | year = | url =http://www.alternet.org/wiretap/23706/?comments=view&cID=25252&pID=22606 | title ="What Is Progressivism?" | format = | work = | publisher =Andrew Garib | accessdate =2006-11-16] [cite web | last = | first = | authorlink = | coauthors = | year = | url =http://www.untergeek.com/?p=396 | title ="Progressive versus Liberal" | format = | work = | publisher =Untergeek.com | accessdate =2006-11-16]

Cultural Liberalism is ultimately founded on a concept of and , and the belief that the major purpose of the government is to protect those rights. Liberals are often called "", as opposed to "" conservatives. The progressive school, as a unique branch of contemporary political thought, tends to advocate certain center-left or left-wing views that may conflict with mainstream liberal views, despite the fact that modern liberalism and progressivism may still both support many of the same policies (such as the concept of as a general last resort).

American progressives tend to support interventionist economics: they advocate , and they oppose the growing influence of corporations. Conversely, European and Australian progressives tend to be more pro-business, and will often have policies that are soft on taxation of large corporations. Progressives are in agreement on an international scale with left-liberalism in that they support organized labor and s, they usually wish to introduce a , and they often support the creation of a system. Yet progressives tend to be more concerned with environmentalism than mainstream liberals, and are often more skeptical of the government, positioning themselves as and advocates of governmental reform. Finally, liberals are more likely to support the Democratic Party in America and the in Europe and Australia, while progressives tend to feel disillusioned with any two-party system, and vote more often for third-party candidates Fact|date=September 2008

Libertarians do not advocate social change "per se" but rather support a hands-off approach to government, advocating that people form voluntary associations with other, like-minded people to influence the direction of society.

Conservatives, by default, advocate established s and social stability. They are skeptical of notions of "progress" and social change -- in any direction -- believing that it is best to retain social relations that have been proven stable by past experience.

Author argues that contemporary progressives see a flexible, open market economy supported by strong public services as the best means to achieving social justice. In common with the liberal tradition, modern progressivism aspires to a society that is also open – economically, intellectually and culturally – in which individuals and their families can progress on the basis of their aspirations and hard work, and are not held back by family background or circumstance. [cite web | last = | first = | authorlink = | coauthors = | year = | url =http://www.sauer-thompson.com/archives/philosophy/2007/03/progressivism.html | title =Progressivism + Liberalism | format = | work = | publisher =Gary Sauer-Thompson 3-19-07. | accessdate =2007-03-21]

(in the strict or radical sense) aims to establish a fundamentally different society from the one that currently exists in most countries. While there are different schools of socialism, which often tend to have differing views of the ideal socialist society, some general examples of socialist concepts are: The desire to abolish capitalism, to place the under the collective ownership of the people, and to achieve a very high degree of economic and political equality. Socialists argue that capitalism exploits the , and they desire for workers to play a vital role in moving society from capitalism to socialism (either by rising up in a revolution or , or by voting "en masse" for socialist political parties).

However, the relationship between progressivism and socialism as described here has often been a tense one. An example of this tension can be seen in the conflict between the Progressive Party of and the Socialist Party of in the United States.