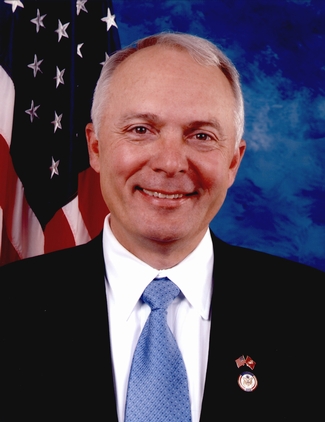 
John Paul Kline (born , in ) is an American . He has been a Republican member of the since 2003, representing , one of eight congressional districts in Minnesota.

Prior to his election to Congress, Kline was a 25-year veteran of the , where he was a senior aide to Presidents Carter and Reagan and was responsible for carrying the President's package containing launch codes for a , known as the "Football". During his military career, retiring as , Kline served as a pilot in , commanded all Marine aviation forces in in , flew "," the Presidential helicopter, and served as Program Development Officer at Headquarters Marine Corps. During his military career, Kline received numerous medals and commendations including Four Legions of Merit, the Meritorious Service Medal, the , the (awarded 3 times), the , a , and the . [cite web|title = Congressman John Kline — Representative of Minnesota|work = John Kline's Biography|publisher = United States House of Representatives|url = http://kline.house.gov/index.cfm?FuseAction=AboutJohnKline.Biography&CFID=25214513&CFTOKEN=13374456|accessdate = 2006-12-22]

In 2002, Kline defeated the Democratic incumbent, , in a rematch of their 2000 and 1998 races. In 2004, he defeated Democratic Burnsville City Councilwoman to win a second term and in 2006, he defeated former FBI and , one of "Time magazine's" "Persons of the Year".

In 2005, Kline introduced legislation to place on the $50 bill. While the bill has a dozen Congressional cosponsors, it has not made any legislative progress.

In his campaigns, Kline received $30,000 in contributions from former House Majority Leader 's . Following DeLay's indictment on charges of money laundering, Democrats have criticized Kline for failing to return DeLay's contributions or to donate them to charity. [ [http://www.ourfuture.org/issues_and_campaigns/accountablecongress/delay/money9.cfm DeLay's Money, Part 9] Accessed August 12th, 2006] The case against Tom DeLay is pending. Kline also accepted $11,000 in political contributions from the PAC of former congressman . After Cunningham’s indictment on fraud charges, Kline donated the $11,000 to charity “to remove questions of any impropriety" according to his chief of staff, Steve Sutton. [ [http://www.signonsandiego.com/news/politics/cunningham/20051202-9999-1n2giveback.html Some Republicans are dumping donations given by Cunningham] Accessed August 12th, 2006]

Kline was considered to have been the most conservative member of the Minnesota delegation in the 109th Congress, scoring 2.8% progressive on a range of issues [cite web|last = Grossman|first = Joshua|title = ProgressivePunch Leading with the Left|work = All Issues|publisher = ProgressivePunch|url = http://www.progressivepunch.org/members.jsp?member=MN2|accessdate = 2007-09-08] and 88% conservative based on 2006 House votes. [cite web |title = ACU Ratings of Congress, 2006|publisher = American Conservative Union |date = 2006 |url = http://www.acuratings.org/2006all.htm#MN |accessdate = 2007-09-08] shows the scores for the entire delegation.

Kline and his wife, Vicky, live in . They have one daughter and one son, Kathy and Dan, and four grandchildren.