Sartell is a city in Benton and Stearns counties in the U.S. state of Minnesota. It is part of the St. Cloud Metropolitan Statistical Area. The population was 15,876 at the 2010 census,[3] making it St. Cloud's most populous suburb and the largest city in the central Minnesota region after St. Cloud. 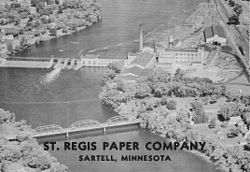 Sartell got its start as a small town on the Mississippi River with lumber and a paper company as its main industries. The present site of the city was originally dubbed "The Third Rapids", as it was the third set of rough waters that French fur traders encountered as they traveled north from Saint Anthony Falls in Minneapolis.

One of the first people to settle in the fledgling town was Joseph B. Sartell, who arrived in 1854 and worked as a millwright at a local sawmill. In 1877, he opened a flour mill at the nearby Watab River, and in 1884 he started the Sartell Brothers Lumber Company with his sons.

In 1905, construction began on both the Watab Pulp and Paper Company and the Sartell Dam across the Mississippi, near the "third rapids". Both were completed in 1907, the dam project having claimed the lives of seven workers. Watab Pulp and Paper was rebuilt and expanded through the years, passing through multiple ownerships and eventually emerging as Verso Paper's Sartell mill, the city's largest employer.

In 1907 residents of the town decided to incorporate. Several influential people felt the town ought to be named Wengert, after a local businessman. Another man lobbied to have the town named Oberly, after himself. But because of Joseph Sartell's many relatives and generous contributions to the community, the town was incorporated as "The Village of Sartell" in his honor. From 1907 until 1973 there was a Sartell on nearly every City Council, the most prominent being Ripley B. "Rip" Sartell, who was mayor for 31 years.

The town continued to grow slowly, developing a number of businesses and a downtown on the east side of the Mississippi along U.S. Route 10. In the 1960s the highway was rerouted, greatly contributing to the demise of the downtown area. The later construction of the current Sartell Bridge over the Mississippi in the early 1980s replaced the remaining businesses. This and Sartell’s location near St. Cloud's major retail center account for its lack of a traditional "downtown".

Independent School District # 748, Sartell-St. Stephen, was created in 1969 because residents wanted to educate their children locally. Despite the lack of a downtown, the city continued to grow at an increasing pace in the 1970s. From 1970 to the present, the city’s population has gone from 700 to over 15,000.[1]

Sartell's largest employers are Verso Paper, which operates a paper mill in the city, and DeZurik Water Controls, whose valve production plant is located in Sartell. The city also hosts a number of small businesses, including gas stations, restaurants, grocery stores, and salons, among others.[6]

Sartell's city council consists of a mayor and four members elected at large. As of August 2011, Sartell's mayor is Joe Perske and the council members are Steve Hennes, Sarah Jane Nicoll, Sandra Cordie, and Dennis Molitor. They possess the authority to pass and enforce ordinances, establish public and administrative policies, create advisory boards and commissions, and manage the city's financial operations, including preparing a budget, auditing expenditures, and transacting other city business as required by law. The City Council also appoints a City Administrator, who oversees the daily operation of the city and implements the policies of the Council.[2]

Transportation to and from Sartell is limited to surface roads, mainly U.S. Route 10 and Minnesota State Highway 15, both of which pass along the outskirts of the city. St. Cloud Metro Bus service runs to destinations in Sartell and neighboring Sauk Rapids and St. Cloud. A rail line passes through town but serves the city only as freight transportation for the Verso Sartell Paper Mill.

The city's proximity to St. Cloud allows for convenient access to St. Cloud Regional Airport (although no carrier presently flies to this airport) as well as the city's Amtrak and Greyhound stations.

The dams along the Mississippi River and the waterway's relatively shallow depth render it useless for anything more than recreational watercraft traffic. Sartell's location on the river facilitated the construction of the Old Sartell Bridge in 1914, which was replaced by the current Sartell Bridge in 1984.

The city is situated on the Mississippi River with the surrounding undeveloped property composed mainly of woodlands and farmland.

There were 3,443 households out of which 46.4% had children under the age of 18 living with them, 60.6% were married couples living together, 9.1% had a female householder with no husband present, and 27.0% were non-families. 20.4% of all households were made up of individuals and 8.0% had someone living alone who was 65 years of age or older. The average household size was 2.75 and the average family size was 3.23.