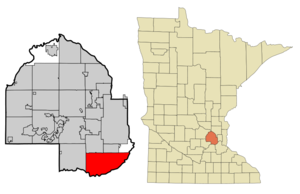 Established as a post- housing boom connected to the urban street grid of Minneapolis and serviced by two major highways, Interstate 35W and , Bloomington is predominantly a bedroom community with both upper-tier households in the western area and traditional middle-class families in its rows of single-family homes in the central to eastern portions. Besides an extensive park system in tradition with the Minneapolis Parks System, the city's south border with the Minnesota River is buffered by the .

Though primarily a work-commuting town, Bloomington has its own competitive economy and is locally headquartered to major companies such as , Toro, and Seagate. Formerly home to the Twin Cities major league baseball, football, and hockey teams at the , the city is now a hospitality and retail magnet being nationally recognized for having the ' largest enclosed shopping center, the . It is presently the only suburb in the metro to be serviced by a light rail line.

In 1839, with renewed conflict with the nation, Chief Cloud Man relocated his band of the from in to an area called Oak Grove in southern Bloomington, close to present day Portland Avenue.

Following the in 1851, the territory west of the Mississippi, including Bloomington, was opened to settlers. A group of pioneers settled Bloomington which included the families of Goodrich, Whalon, and Ames. They named the area Bloomington after the city they were from, Bloomington, , which means flowering field. During this time, most early jobs were in , , and flour milling.

The population surpassed a thousand after 1900 and Bloomington began to transform from a small village to a city. With the rising population came conflict among citizens over certain social issues. Among the major issues during this period were the parents unwillingness to dissolve the individual schools for a larger, consolidated school, and the fear of mounting taxes. By 1900 there were already six rural schools spread throughout the territory with over 200 students enrolled in grades first through eighth. By 1917, the school consolidation issue had been settled. That year voters approved the consolidation of the schools and a year later and transportation began throughout the city. service and appeared.

During the twenty years from 1940 to 1960, the city's population increased to nine times that of the population at the turn of the century. During the 1940s the city's development vision was , low-density housing, each with their own well and . This was in part due to the post boom and subsequent birth of the generation. In 1947 the first was constructed and equipped at a cost of $24,000 and the Bloomington was established with 25 members.

The 1950s saw a considerable expansion to the city and its infrastructure, with the city shifting away from its small town atmosphere and feel. In 1950, because of the increasing population, the first elementary school, Cedarcrest, was built. It was evident that one consolidated school could no longer serve the growing population, and ten new schools would be built in this decade as the school system expanded to meet the needs of the citizens. In 1952 the first large business, , moved to Bloomington. The significance of this can be seen in Bloomington today, which is home to hundreds of businesses of all types.

In 1953, Bloomington changed from a township to village form of government. This more professional approach to government was accompanied by open council meetings, land use plans and published . The effects of this new form of government began immediately, first with the formation of the city (at a cost of $2 per taxpayer) and secondly with the first park land acquisition. Both Beach and were established at a cost of one dollar to each residence. Today, about 1/2 of the city's land area is devoted to city and regional parks playgrounds, and open space. In 1956 the first city land use plan was initiated with the construction of Interstate 35W and .

In 1958, the city changed from a village government to a council-manager form. One of the first council adopted policies was the encouragement of commercial and industrial development, low-cost housing, and shopping centers. Due to the rapid population increase during this time, police and fire departments changed to a 24-hour dispatching system, and the fire department (now made up of 46 members) converted a garage into the second fire station.

The 1960s saw accelerated school and business growth throughout the city. On November 8, 1960, Bloomington officially became a city as voters approved the city's organizing document, the City Charter. The city charter provides for a Council-Manager form of government in which the city council exercises the legislative power of the city and determines all city policies (see City of Bloomington Government). In 1967, a second and third official fire station were approved and built to more effectively combat fires in the increasing population. In 1968, Normandale Junior College opened with an initial enrollment of 1,358 students. It would not be until 1974 that the college would change to its present name, , to reflect expanded courses of study.

A number of new city buildings were constructed in the 1970s. In 1970 Jefferson High School, rink one and a fourth fire station were built. In 1971, school enrollment peaked with 26,000 students, and the fire department had grown to a force of 105 men. It was not until 1974, after a six hour city council meeting, were women allowed to join the Bloomington Fire Department (the city's first female firefighter, Ann Majerus, would not join the department until 1984). In 1975 a second rink was added to the Bloomington Ice Garden and fifth fire station, and subsequent sixth in 1979, were also built.

in the United States.

There are three primary land types in the city. The northeastern part of the city is a sand plain, low hills dominate the western portion of the city, and the far south lies within the valley of the .

Bloomington's third high school, Lincoln High School (originally Bloomington High School), was sold to the in the mid 1980s. Now controlled by , it is used primarily for defense contracting work, although Bloomington Public Schools is a tenant. The stadium, named Bloomington Stadium, there is still used by both Kennedy High School and Jefferson High School for home football, and games.

* is located on Lyndale Ave. It is associated with the and community.
* is located near Bloomington Ferry Road and Old Shakopee Road.
*A K-5 school operated by Minneapolis-based at 102nd and Xerxes.
* operates a K-12 school just west of France Avenue on 98th Street.
* (formerly Lutheran High School) located at 82nd and Park.

* is a two-year college, with 8,500 full and part-time students, that has been in Bloomington since 1968. It is part of the (MnSCU) system.
* focuses on natural health care and patient research, in the areas of , , , and .
* is a small Christian school focused on missionary preparation.

Comcast provides access to four Bloomington cable television stations for public, education and government (PEG) programming. They include The Bloomington Channel 14 [http://www.tbc14.org link] , a comprehensive source of Bloomington information and programming. The channel features City Council and school board meetings, a weekly news magazine show called "Bloomington Today", "Roll Call", a weekly update on public safety news produced by the Bloomington Police Department, arts events, and sports. Bloomington Educational Cable Television (BEC-TV) [http://www.bectv.org/] highlights educational and school-based programs from the Bloomington's public and private schools. Programming on this channel includes educational content, concerts, choir shows, graduations, and sporting events. Two student produced shows are also on BEC-TV. Tomorrow's Voices Today (TVT) is a teen news show that highlights the good things teens are doing around the city and talks about teen related issues. is a late night call-in talk show. Skits for the show are produced by students and the show is live every Friday night (Sat. Morning) at 12:30am on TBC (Channel 14). A third channel, BCAT, (Bloomington Cable Access Television) [http://www.ci.bloomington.mn.us/cityhall/dept/commserv/commun/bcat/bcat.htm] is a public access channel that allows individuals and organizations to learn video production and create television shows. The schedules for these channels can be found on a channel called the B.R.A.I.N. The cable access channels are funded by cable franchise fees collected in the city.