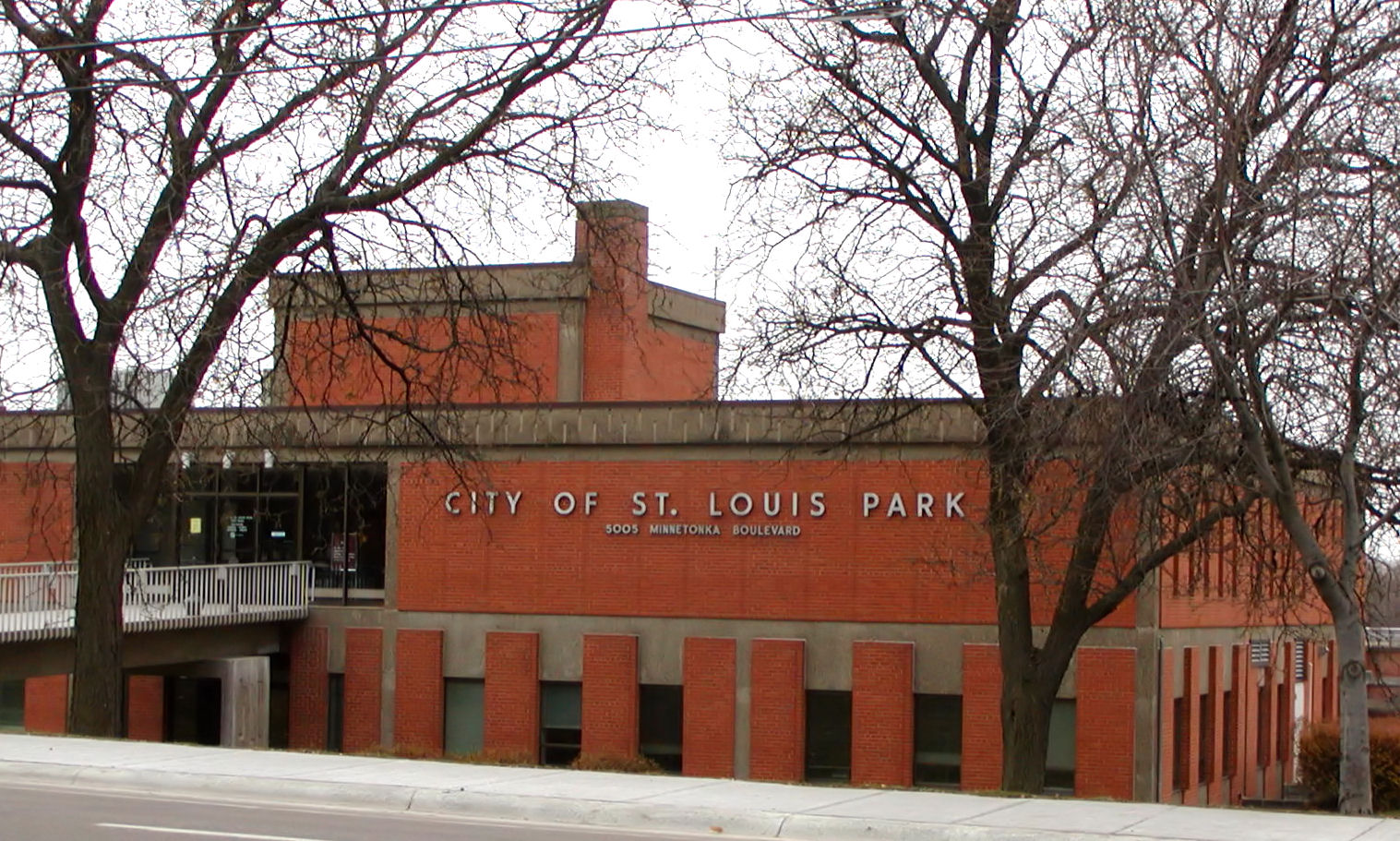 St. Louis Park is a city in Hennepin County, , , and a first ring- immediately west of Minneapolis. Its neighboring cities include Edina, Golden Valley, Minnetonka, Plymouth, Hopkins, and Minneapolis. It is the birthplace and childhood home of movie directors , activist Rev. , singer/songwriter , columnist , politician/author/satirist , Singer/Songwriter/Guitarist of the band humanboy , songwriter , guitarist , writer , and football coach . Baseball announcer lived there. Its population was 44,126 at the 2000 census.

The , which has a major collection of antique radio and television equipment, is also in the city. Items range from radios produced by local manufacturers to the system used to cut discs carrying audio for the first "talkie," "The Jazz Singer".

, , and Minnesota State Highways 7 and 100 are four of the main routes in the city.

There were 20,782 households out of which 22.0% had children under the age of 18 living with them, 39.3% were married couples living together, 8.6% had a female householder with no husband present, and 49.2% were non-families. 37.9% of all households were made up of individuals and 10.4% had someone living alone who was 65 years of age or older. The average household size was 2.08 and the average family size was 2.81.

St. Louis Park operates under the Council/Manager form of government. An elected sets the policy and overall direction for the city. Then city workers, under the direction of a professional city manager carry out council decisions and provide day-to-day city services. The city manager is accountable to the City Council. St. Louis Park voters elect the mayor and six (two at-large and four ward) City Council members to four-year terms. The mayor and at-large council members represent all residents; the ward council members are primarily responsible for representing their ward constituents.

St. Louis Park is located in , represented by lawyer Keith Ellison, a Democrat. The town was placed in this district, which includes traditionally 'liberal' segments of Minneapolis in the redistricting following the 1990 census. Prior to that, St. Louis Park had been part of the 3rd congressional district, along with Edina and other 'conservative' suburbs. The 3rd districit was represented by Republicans Clark McGregor and William Frenzel from 1961 until 1991.

The 1860s village that became St. Louis Park was originally known as Elmwood, which today is a neighborhood inside the city. In August 1886, 31 people signed a petition asking county commissioners to incorporate the Village of St. Louis Park. The petition was officially registered on , .

The name "St. Louis Park" was derived from the that ran through the area.

In 1892, and a group of wealthy Minneapolis industrialists incorporated the to focus industrial development in Minneapolis. Walker's company also began developing St. Louis Park for industrial, commercial and residential use.

Generally, development progressed outward from the original village center at the intersection of the Minneapolis and St. Louis Railway with Wooddale Avenue. However, this concentric pattern wasn’t strong and was overtaken by Minneapolis expansion. By 1883, the western boundary of Minneapolis was at France Avenue. The Minneapolis city boundary may have continued to expand westward had it not been for St. Louis Park's 1886 incorporation.

By 1893, the downtown area of St. Louis Park had three hotels and many newly arrived companies surrounded the downtown. Around 1890, the village had more than 600 industrial jobs, the majority associated with agriculture implement manufacturing.

The altered the developers’ plans and put a damper on the village's growth. Walker left St. Louis Park to pursue other business ventures.

In 1899, St. Louis Park became the home to the , the world's first concrete, tubular which provided an alternative to combustible wooden elevators. Despite the nickname of "Peavey's Folly" and dire predictions that the elevator would burst like a balloon when the grain was drawn off, the experiment worked and concrete elevators have been used ever since.

At the end of , only seven scattered operated in St. Louis Park because streetcars provided easy access to shopping in Minneapolis. In the 10 years from 1920 to 1930, the population doubled from 2,281 to 4,710. Vigorous homebuilding occurred in the late 1930s to accommodate the pent-up need created during the depression. With America's involvement in , however, all development came to a halt.

Residential development was closely followed by commercial developers anxious to bring goods and services to these new households. In the late 1940s, Minnesota's first shopping center — the 30,000 square foot — was constructed on the northeast corner of and Highway 100. (The Lilac Way shopping center was torn down in the late 1980s to make way for redevelopment.) Miracle Mile shopping center, built in 1950, and , which opened in 1956, remain open today.

In the late 1940s, a group of 11 former army doctors opened the St. Louis Park Medical Center in a small building on Excelsior Boulevard. The medical center merged with and, today, is . Park Nicollet Health Systems is the second largest medical clinic in Minnesota (after Rochester's ).

During the period between 1950 and 1956, 66 new subdivisions were recorded to make room for 2,700 new homes. In 1953 and 1954, the final two parcels — and — were annexed. These parcels (originally in Minnetonka) came to St. Louis Park because of its ability to provide sewer and water service.

From village to city

In 1954, voters approved a home rule charter that gave an overwhelmed St. Louis Park the status of a city. That action enabled the city to hire a to assume some of the duties handled by the part-time city council. Several bridges built during that time are now being repaired or destroyed.

St. Louis Park athletic teams are nicknamed the Orioles. The school colors are orange and black.In 2005 the school moved out of the Classic Lake Conference and into the North Suburban Conference.

The school won the boys state baskeball tournament in 1962 under coach Lloyd Holm, and had a resurgence in boys basketball in the 1970s under coach August Schmidt. Park went to the state tourney in 1978-80. Park was a power in boys track and field in the late 1960s and early 1970s, and had one of the top football teams in the state in 1970.

For many years, a fixture at Park athletic events was the school dance line, "The Parkettes." Renowned as the top dance line in the state, the Parkettes served as cheerleaders for the Minnesota Vikings from 1964-1983.

Some of the more well known athletes to come out of St. Louis Park include former NBA player and current Timberwolves broadcaster Jim Peterson (1980), NFL coach Mark Trestman(1974), current NHL player Erik Rasmussen(1995) and current Seattle Mariner T.J. Bohn(1998). 1965 graduate Bob Stein was an All-American end at the University of Minnesota who was the youngest player ever to play in a Super Bowl for the Kansas City Chiefs. He later served as the President of the Minnesota Timberwolves of the NBA from 1987 to 1994. Former Minnesota Vikings and Tennessee Titans President Jeff Diamond is a 1971 Park graduate.

*Park Spanish Immersion is for K-6

There are over 2,700 businesses in St. Louis Park, including:

On , , the City of St. Louis Park embarked on its second City Vision project. This project is an initiative led by the city to determine the path it will take in the next 5-10 years. The original project, undertaken ten years ago, led to the construction of the Excelsior and Grand development which have proven to be enormous successes for the community.

Hundreds of people attended the meeting, and the city is looking into several areas that were of common interest among those in attendance. Those included balanced housing, improved transportation options, the reworking of the Minnesota Highway 7 intersections, and a gathering place for young people.