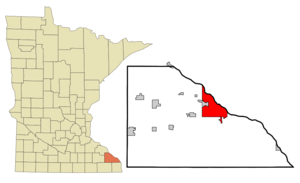 mapsize = 250px
map_caption = Location within the state of

Winona is a city in and the of Winona CountyGR|6, , .GR|6 Located in picturesque bluff country on the , its most noticeable physical landmark is Sugar Loaf.

The city is named after semi-mythical , possibly a relative of Chief Wapasha (Wabasha) III.Fact|date=April 2008

The population was 27,069 at the 2000 census. Its annual celebration, "Steamboat Days", is held in the summer. It is known as the capital of the United States. [ [http://minnesota.publicradio.org/display/web/2006/11/22/stainedglass/ MPR: Winona company makes glass into art ] ]

Evidence gathered by archaeologists indicates that people lived in the valley as early as 9500 B.C. The earliest evidence of human habitation in Winona County is based on the discovery of a site (circa 800 B.C.-900 A.D.). The present-day city of Winona was founded on the village of Keoxa. As the seat of the Wapasha dynasty, it was home to a band of the eastern . The summer homes of the Keoxa natives were made of bark supported by a framework and poles. Their winter residence was a made of about 8 buffalo hides sewn together with , typically about 12 feet (4 m) high and 10 to 12 feet (3 to 4 m) in diameter, with a fire in the middle to keep the temperature inside the dwelling tolerable even in the coldest weather.

Lieutenant left Fort Bellefontaine on August 9, 1805 with orders to find the source of the Mississippi. On September 14, 1805, he reached the Mississippi Valley near island number 72 (on his map), which would one day be Winona, Minnesota, and recorded his impressions in his log.

Less than fifty years later, Pike's island 72 was selected by Captain Orrin Smith as a townsite on the west bank of the Mississippi River. For over twenty-five years, Smith had sailed the river between , and , as owner and pilot of the river packet Nominee. In 1851 Smith learned that the treaties of Traverse des Sioux and Mendota would establish a reservation in the interior of the state, and realized that there would be a rush to develop townsites on the Minnesota side of the river. On October 15, 1851 Orrin Smith became the founder of Winona, by landing his ship's carpenter, Mr. Erwin Johnson, and two other men (Smith and Stevens) with the purpose of claiming title to the riverfront and surrounding prairie land. When the town site was surveyed and plotted by John Ball, United States deputy surveyor, it was given the name of "Montezuma", as requested by Johnson and Smith. Henry D. Huff bought an interest in the town site in 1853. With the consent of Capt. Smith, Huff erased the name of Montezuma and inserted the name of Winona on the plot, a name derived from the Dakota Indian word "We-no-nah", which translates to "first-born daughter".

Winona was settled by non-Native Americans in 1851, and the town was laid out into lots in 1852-3 with growth expanding rapidly over the years. The population increased from 815 in December, 1855, to 3,000 in December, 1856. In 1860 Winona had a population of 2,456, and was third largest city in Minnesota until the late 1880s. Part of the surge in population in 1856 was the fact that land claims became legal in 1855 with the completion of land surveys and the opening of a local federal land office. It was incorporated as a city in 1857.

Growth in Winona was built on a railway and transportation system, milling, and . In 1856 over 1,300 steamboats stopped at Winona. The grew and the Winona Railway Bridge, built of steel and iron with a swingspan over the river, was the second railway bridge to span the Mississippi. The first crossed on July 4, 1891 and the bridge served the Green Bay & Western (GBW) and Burlington Route for the next 94 years until it was closed in 1985 and dismantled in the fall of 1990. In 1892, a toll-bridge over the Mississippi, a wooden high-bridge, was completed and remained in service until 1942.

During the 1860s southern Minnesota was the greatest wheat producing region in the country and Winona was the main port for shipping Minnesota wheat. By 1870, Winona was the fourth largest wheat shipping port in the United States. In 1899 Bay State Milling was founded, and is still in operation today. John Laird started the first lumber mill in 1855; he later was joined by his cousins James and Matthew Norton in founding the Laird-Norton Co. The Winona sawmills reached their peak production in 1892 when they produced over 160 million board feet (380,000 m³) annually and ranked eighth in production of lumber in the upper Midwest.

Winona's population reached 19,714 in 1900, but thereafter declined for some years after the collapse of the lumber industry.

Winona's primary "suburbs" are Goodview, Stockton, and Minnesota City to the west and Homer to the east. Rochester is 45 minutes west of Winona and La Crosse 30 minutes southeast.

There were 10,301 households out of which 23.9% had children under the age of 18 living with them, 40.4% were married couples living together, 8.4% had a female householder with no husband present, and 48.3% were non-families. 35.2% of all households were made up of individuals and 12.8% had someone living alone who was 65 years of age or older. The average household size was 2.27 and the average family size was 2.94.

U.S. Highway 14, U.S. Highway 61, and Minnesota Highway 43 are three of the main routes in the city. Interstate Highway 90 is located a short distance south of the city.

Winona was once served by several passenger railroads. Its Amtrak station is now served by Amtrak's Amtrak lines|Empire Builder daily in each direction between and Seattle and Portland.

serves in the area.

Winona is home to the headquarters of the Watkins Corporation, , , , , , , WinCraft Sports, and .

Winona is located in , represented by Mankato educator , a Democrat.

Winona became the site of the first normal school west of the Mississippi in 1858 with the establishment of Winona Normal School (now ). This was the beginning of Winona's tradition as a center of higher education. In addition, St. Mary's College (now Saint Mary's University) was founded as a private school in 1912. Later, as the necessary opportunity of higher education for women became apparent, the College of St. Teresa was created. After St. Mary's became co-ed in 1969, St. Teresa's closed down in 1988, and its facilities are now used by Winona State, St. Mary's, Cotter High School, and the Valencia Performing Arts Academy. St. Mary's University now owns and operates the campus. additionally has a campus in Winona.

There is also a relatively diverse variety of K-12 educational opportunities. Run by , the local public school system includes 7 elementary schools (4 in Winona), the , and the . In addition, there is a large private Catholic preparatory school system, that includes St. Mary's primary school, Cathedral School, St. Stan's Middle School, Cotter Junior High School, and Cotter Senior High School. There are also other non preparatory private schools. Bluffview Montessori Charter School, located in Winona, was the first charter , and the second charter school overall in the United States. Finally, there are two private K-8 schools, and .

*Winona is the for the . The Cathedral of the Sacred Heart is the mother church of the Diocese. The Immaculate Heart of Mary Seminary, which is located in Winona, is sponsored by the .
*Winona is also home to Saint Stanislaus Kostka Catholic Church, a built in the , known for its opulence.
*Winona is also the seat of the . This is the United States seminary for the . It previously was in Ridgefield, , but was moved to Winona in 1988.

In addition to the arts brought to the community by the local educational institutes, Winona has two professional theater companies, the and the . Recently completed is the , which encompasses work by both international and local artists, a collection of photographs by the river engineer Henry Bosse, and sculpture by and will eventually have an actual river as an exhibit.

Winona has two s: the , a daily morning paper; and the , a bi-weekly paper that has mid-week and Sunday editions. Papers from the La Crosse, Rochester, and Twin Cities are also commonly read. There is one local TV network, HBCI; however, it is only available to cable subscribers of the HBC cable company. Winona does receive TV signals from neighboring cities, including several channels each from La Crosse, Rochester, Eau Claire, and the Twin Cities, although exactly what can be received depends entirely on one's location in the area, as the extensive system of s and s may permit or block any or all signals. Local s include: