St. Louis County is a county located in the U.S. state of Minnesota. As of 2010, the population was 200,226.[1] Its county seat is Duluth. It is the largest county by total area in Minnesota, and the second largest in the United States east of the Mississippi River; in land area alone, after Aroostook County, Maine.[2] Major industries include pulpwood production and tourism. Surface mining of high-grade iron-ore remains an important part of the economy of the Iron Range. Parts of the Bois Forte and Fond du Lac Indian reservations are in the county. 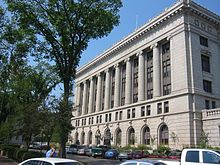 St. Louis County is known for its spectacular natural beauty. Voyageurs National Park, established in 1975, is located in its northwestern corner, on the south shore of Rainy Lake, on the Ontario, Canada border, and is popular with canoeists, kayakers, other boaters and fishermen. The county also includes parts of Superior National Forest, established in 1909, and the Boundary Waters Canoe Area Wilderness within it on the U.S.-Canadian border, established in 1978. The BWCAW is a 1,090,000-acre (4,400 km2) wilderness area designated for fishing, camping, hiking, and canoeing and is one of the most visited wilderness areas in the United States. St. Louis County has over 500 lakes, including Rainy Lake, Kabetogama Lake, Namakan Lake, Sand Point Lake, and Crane Lake.

The "Hill of Three Waters" on the Laurentian Divide lies just north of Hibbing. Rain falling on this hill runs to three watersheds: Hudson Bay to the north, the Gulf of Saint Lawrence to the east (via Lake Superior), or the Gulf of Mexico to the south and west (via the Mississippi River).[4]

St. Louis County has one of the most important fresh-water ports in the United States, located in Duluth on Lake Superior.

The county encompasses part of the Iron Range, which has a significant taconite mining industry, particularly in the city of Hibbing. 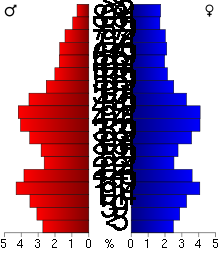 Like all counties in Minnesota, Saint Louis is governed by an elected and nonpartisan board of commissioners. In Minnesota, county commissions usually have five members, but Saint Louis, Hennepin, and Ramsey counties have seven members. Each commissioner represents a district of equal population.

The county commission elects a chair who presides at meetings.

Commissioners as of January 2011:

St. Louis County is considering doing a study about dividing the county into two counties.[7]

This county is by far the most reliable Democratic county in the state, as no Republican or independent won this county in any statewide election since 1992. The only time a Democrat obtained less than 50% of the vote was in 1998, when Jesse Ventura of the Reform ticket won statewide and gained 24% in the county. Since 1992, the only time when a Republican obtained over 34% of the vote was in the elections of 1994 (year of Republican Revolution) when the incumbent Independent-Republican governor won the statewide vote by a landslide vote of over 60%, and when the Independent-Republican senatorial candidate won election with 49% statewide, both of which is rare in Minnesota. Since 1994, the highest percentages a Republican obtained out of the county were 39.7% from Chip Cravaack's 2010 defeat of 36-year incumbent Congressman Jim Oberstar and 33.6% from George W. Bush's re-election of 2004.