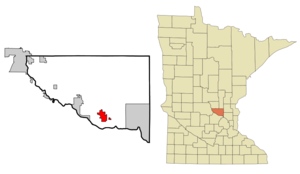 and are two of the main arterial routes in the city.

There were 2,117 households out of which 44.6% had children under the age of 18 living with them, 58.1% were married couples living together, 9.9% had a female householder with no husband present, and 25.8% were non-families. 17.4% of all households were made up of individuals and 4.5% had someone living alone who was 65 years of age or older. The average household size was 2.86 and the average family size was 3.23.

Located about 40 miles northwest of the Twin Cities, Big Lake was once a popular location for escapes from the city, its lakes dotted with summer cabins. Now it is considered a suburb of the metro area, with a significant portion of residents commuting into the Cities daily.

The lake for which the town is named was once an important part of the Twin Cities economy, as in the days before modern refrigerators, much of the ice for metropolitan iceboxes was harvested from Big Lake. [ [http://www.city-data.com/city/Big-Lake-Minnesota.html Big Lake, Minnesota (MN) Detailed Profile - relocation, real estate, travel, jobs, hospitals, schools, crime, news ] ] .

Big Lake was designated as the northernmost terminus of the first phase of the line connecting the northeast suburbs and downtown Minneapolis; the line is set for completion in 2009.

Big Lake is known locally for its annual summer festival " [http://www.biglakespudfest.com Spud Fest] ," which celebrates all things potato-related. The festival is also known for its large softball tournament, attracting teams from all over the state.

The local newspaper is the [http://www.westsherburnetribune.com/ West Sherburne Tribune] .

Mitchell Loegring- The best baseball player in University of Wisconsin-Superior history. Mitch is being looked at by many MLB teams, and is known for his crappy madden skills.