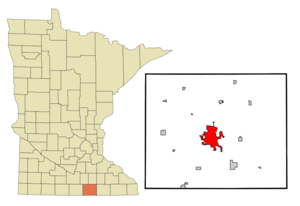 "For the musician, see

Albert Lea is a city in and the of Freeborn County in the southeastern part of the of .GR|6 The population was 18,356 at the 2000 census.

The city is at the junction of Interstates 35 and 90, about 90 s south of the Twin Cities. It is on the shores of Fountain Lake, Pickerel Lake, Albert Lea Lake, Goose Lake, School Lake, and . Fountain Lake is part of the flowage and Albert Lea Lake.

The city's early growth was based upon , farming support services and . At one time it was the site of 's headquarters. Other manufacturing included Edwards Manufacturing, Scotsman Ice Machines, Streater Store fixtures, and Universal Milking Machines. Like many U.S. towns much of the manufacturing base has diminished. A long-time center of the city's job opportunity was the Wilson & Company meat packing plant, later known as Farmstead and Farmland. This facility was destroyed by fire. The largest employer is currently Albert Lea Medical Center/Mayo with over 1,500 jobs.

The city is named after , a topographer with the United States Dragoons, who surveyed southern Minnesota and northern in 1835, including the current site of Albert Lea.

Albert Lea received national attention in 1959 after Local 6 of the went on strike against Wilson & Co. (one of the Big Four meatpacking plants at the time) over issues involving mandatory overtime requirements.