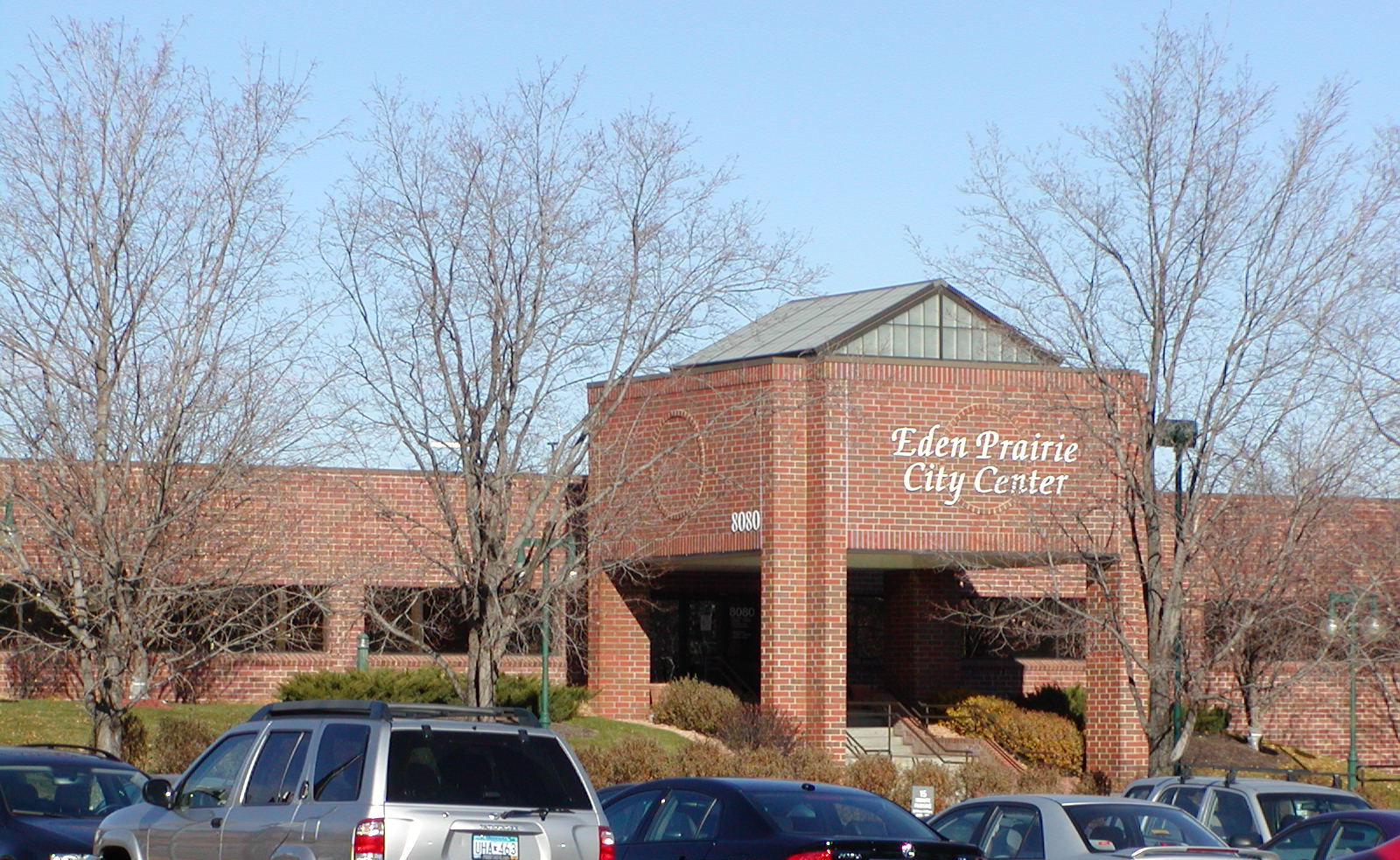 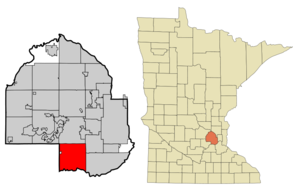 Eden Prairie is an 12 miles (22 km) southwest of downtown Minneapolis in and the 12th largest city in the of . The city lies on the north bank of the , upstream from the confluence with the . As the seventh largest suburb, Eden Prairie and nearby suburbs form the southwest portion of , the sixteenth largest in the , with about 3.2 million residents. The recorded the city's population at 54,901 in 2000.

For most of its existence, Eden Prairie has been a slow-growing, pastoral village on the far southwestern fringes of the Twin Cities area. Between 1880 and 1960, Eden Prairie’s population grew by only 1,300 people, from 739 to 2,000.

Native Americans were the first to live in the area. In 1851, a treaty opened land west of the to settlement allowing pioneers to settle in what is now Eden Prairie. The town board of Eden Prairie held its first meeting in a log school house on , , the same day Minnesota became a state. However, Eden Prairie's farming community grew slowly over the years. was the first sign of big development in 1946. The and were decades of growth for the City's parks and recreation system. In the mid-70's, the community earned a higher profile with the addition of Interstate Highway 494 and the Eden Prairie Shopping Center. Eden Prairie became a Village in 1962 and a in 1974.

Eden Prairie is colloquially referred to as "E.P."Fact|date=November 2007

The land in Eden Prairie consists of rolling hills and bluffs overlooking the with zones of and mixed (primarily ) forests.

There were 20,457 households out of which 42.6% had children under the age of 18 living with them, 61.3% were married couples living together, 7.7% had a female householder with no husband present, and 28.7% were non-families. 22.0% of all households were made up of individuals and 3.4% had someone living alone who was 65 years of age or older. The average household size was 2.68 and the average family size was 3.20.

Today, Eden Prairie is home to more than 2,200 businesses, including many that specialize in communications and information technology.

The first school in Eden Prairie was Anderson School, a located near a . At the time of its construction, it was in the center of the city and thus an ideal spot. The old , built in 1924, is now the school district Administration Building, and is located next to Central Kindergarten Center and Central Middle School.

Today Eden Prairie currently operates nine schools. Unlike other school districts in the state, Eden Prairie has an intermediate school (Oak Point) for grades five and six. is the largest high school in the state, with 3,270 students, and is located near the grounds of . Melissa Krull is the superintendent for the Eden Prairie School District.

Eden Prairie has one publicly-funded , . This college preparatory school currently offers a rigorous classical, liberal arts curriculum to grades 6-11, with 12th grade being added in the 2007 &ndash; 2008 school year. The first graduating class for Eagle Ridge Academy will be the Class of 2008.

Eden Prairie has one , The [http://www.ism-sabis.net/ International School of Minnesota] , which offers a private education for students in grades preschool through 12.

There are three technical colleges in Eden Prairie:
* [http://www.hennepintech.edu/ Hennepin Technical College] has an enrollment of roughly 7,000 full and part time students.
* [http://www.itt-tech.edu/] specializes in courses on , , and . ITT Technical Institute has an enrollment of approximately 170 .
* [http://www.rasmussen.edu/ Rasmussen College] specializes in business management, health, and technology. This campus opened on July 3, 2006 and replaced its former location in .

Eden Prairie was proud to raise over $400,000 within the community to build a veterans memorial in 2008, in a grassroots effort. The memorial has two components; service to country and world peace. It was constructed in Purgatory Creek Park near the intersection of Technology Drive & Prairie Center Drive. World class sculptor, Neil Brodin designed and constructed two bronze sculptures [ [http:www.epveteransmemorial.org] ] . The service to country sculpture represents a wounded airman carried over the shoulders of a soldier of the battle field. The world peace sculpture depicts a woman service member touch the world globe, honoring women who have served. Members of the community were able to purchase a place on the memorial for the name of a loved one who served in any branch of U.S. service, without regard to any particular war or conflict. Minnesota based Cold Spring Granite provided Messabi black granite for the walls of the memorial.

Eden Prairie Boys Basketball Association offers both a travel and in-house program. Each season, 1,300 boys participate. Registration is held in September. Rookie League (grades K-1) begins play October through December. The second grade program runs on Saturday mornings from December through March and is a fundamentals-only program. In-house evaluations for grades 3-12 are held in November with league play beginning late November through March. The Southwest League for grades 6-8 plays other communities with a tournament weekend in March. The travel program runs from October through March. Travel tryouts for grades 5-8 are held in October.

The Eden Prairie Girls Basketball Association offers developmental training sessions beginning with girls in grade 2 and runs from January through February. Developmental in-house intramural play, with one practice and one game each week, is offered to girls grades 3-12. Registration is in September and evaluations are in October with the season running from December through March. Clinics and tournaments are held throughout the year. A travel program is available to grades 5-8 with two practices per week and weekend games. Registration is in August with the season running from November through March. EPGBA also sponsors a 3-on-3 summer league and clinics.

The Eden Prairie Baseball Association has over 1,850 players, ages 4-18, in both in-house and travel leagues. Registration is usually held in February with the season beginning in April and playoff tournaments in July. Youth are separated by age or grade level. A travel league is available for youth ages 10-18, tryouts are in April. The Association's 15 directors, 12 associate directors, 13 commissioners and over 500 head and assistant coaches are all volunteers.

More than 800 youth in grades 3-8 learn the fundamentals of football, sportsmanship, discipline and the importance of team play. Each participant will learn to play offense and defense positions. Teams are formed with an equal distribution of talent and weight limits are established for each grade. Registration is held in May. Equipment pickup and skills evaluation are both in August with the season running August through October. Grades 4-8 will play out of town games. Summer camps, led by Eden Prairie High School Head Football Coach Mike Grant, are also held to refine skills.

As the third largest hockey organization in Minnesota, the Eden Prairie Hockey Association serves more than 800 boys and girls from age 4-18. They learn the skills and strategies involved in hockey while having fun. Registrations and tryouts are held in September with the season running from November to March. Rookie camps are held in the fall and spring. Nine-year-olds and older participate in travel teams playing against neighboring communities. A girls-only hockey experience with a ‘no checking’ policy is available for girls ages 14 and under.

The Eden Prairie Lacrosse Association offers programs for both boys and girls grades 3-12. Indoor season registration is in November and runs from January through March/April. The regular outdoor season registration is in March. The season runs from May 1st through July 31st. The summer leagues, camps and clinics run from June through August. Rental equipment is available for new players who may not want to immediately invest in equipment.

The Eden Prairie Soccer Association offers two seasons of recreational soccer to more than 4,000 youth aged between four (entering kindergarten in the fall) and 18 (in high school in the spring) in 12 age-segregated divisions. Spring registration is usually held in February with play running from May through June. Fall registration is in June with the season running from mid-August through mid-October. Teams meet twice a week with an emphasis on having fun and learning the game. Most practices and games are held at the Flying Cloud Fields but other Eden Prairie park fields are also used.

The Eden Prairie Soccer Club offers a competitive travel soccer experience for youth ages seven and older to play in the spring and fall and a winter training program. Spring registration is usually in February, with the season running from May into July. Fall registrations are in August. All 800 players attend skill evaluation sessions and are placed at an appropriate team level. EPSC hosts the Eden Prairie Cup, a Midwest tournament with more than 30 brackets featuring teams from seven states and foreign countries.

Beginning in Spring 2006, children in grades K-6 will be able to participate in a six week track program with practice and instruction during the week, and meets each weekend. The goal of the program is to encourage kids to enjoy running, jumping, and throwing while also introducing them to the structure of track and field competition. Ribbons will be awarded at the meets. Registration is held in February; the track season will begin in April at local schools.

The Eden Prairie Wrestling Club is a K-8th grade program; prior experience is not required. We make every effort to match experience and ability levels during practices. Like any sport, some athletes wrestle year-round, others (especially first and second year wrestlers) feel a three month season is adequate. To accommodate this we have two sessions: mid-November to mid-January and mid-January to mid-March.

* The comedy series, "", was originated here by , and Eden Prairie is home to the show's production company Best Brains, Inc.
* The comedy "" was filmed at the Eden Prairie Center mall (before remodeling).
* Scenes of the comedy "" were filmed in the mall parking lot, which is claimed to be the parking lot of the nearby in the movie. The water tower with the clock is visible in the background.
* In the movie "Fargo", the character Mike Yanagita lives in Eden Prairie and comments on the city's school district while dining with Marge at the Radisson [Coen & Coen, [http://www.weeklyscript.com/Fargo.txt "Fargo"] , a screen play by Ethan Coen and Joel Coen (1996)] . Documentry by Luis Rameriez features Parts of Eden Prairie in his film titled poverty in the burbs.
* The movie features fictitious Eden Hall Academy, whose name crosses Eden Prairie with .
* The Prince film, "Graffiti Bridge", got its title from an actual railroad bridge in northern Eden Prairie that crossed over Valley View Road. It was legal to spray graffiti on the bridge, and when the movie came out, a large mural of Prince was featured on the bridge. The bridge was torn down in the early 1990s when Valley View Road needed to be widened (the road narrowed to one lane under the bridge, with each direction of traffic taking turns to pass under) [New York Times, [http://query.nytimes.com/gst/fullpage.html?sec=travel&res=9C0CE3DD1639F936A15751C0A966958260 Lovers of Graffiti Rally To Save an Old Bridge] , New York Times, February 25, 1990.] . When the bridge was torn down, pieces of the bridge were sold as mementos along with a miniature newspaper article about the bridge.
* On March 4, 2002, President visited Eden Prairie High School, announcing his Quality Teacher Initiative [Bush, G.W., [http://www.whitehouse.gov/news/releases/2002/03/20020304-8.html President Launches Quality Teacher Initiative] (White House Transcript), Eden Prairie High School, Eden Prairie, MN, March 4, 2002.] .
* The Planes of Fame East air museum was located at until December 1997, at which time all of the museum's vintage airplanes were moved to Chino, . [WotN, [http://www.wotn.org/museum_project.htm Wings of the North Museum Project] ] .
* In 2007, Sports Illustrated Magazine named Eden Prairie High School's sports program the best in the state of Minnesota.