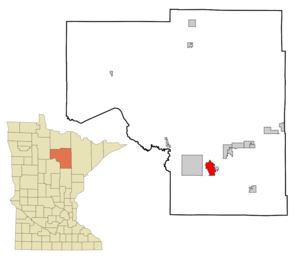 The city of Grand Rapids is named for the local rapids in the river, which was the uppermost limit of practical travel during the late 1800s. Today, those rapids are hidden underneath the of the .

Grand Rapids was originally founded as a logging town, as the Mississippi River provided an optimal method of log shipment to population centers. The predecessor of the Blandin paper mill was opened in 1902. [ [http://users.stlcc.edu/jangert/grnd_rpd/grnd_rpd.html Grand Rapids Minnesota ] ]

The [http://www.mnhs.org/places/sites/fhc/ Forest History Center] is a State Historic Site and a living museum that recreates life as it was in a turn of the century logging camp.

Grand Rapids is the birthplace and early (until she was four) childhood home of legendary singer and actress . There is a local museum dedicated to her life and career, and Judy's fully restored birthplace is open to the public as well. An annual Judy Garland Festival is held the fourth weekend in June.

"The plaque, left, stands in front of the house in Grand Rapids in which Judy Garland spent her first four years. The house, right, was built in 1892 and was moved to this site in 1994."

Historically, the local economy was based on timber harvesting, and to this day, , now owned by the Finnish-based UPM paper company, has its papermaking facilities in downtown Grand Rapids, while Ainsworth (formerly ) located just outside of the city limits, produced until it closed recently.

The or region of Minnesota begins with iron mines north and northeast of the city. Although technically and geographically a member of the Iron Range, Grand Rapids and its economy has been historically based on paper manufacturing and other wood products. Its current economy also has a large tourist footing, with many local resorts, golf courses, and excellent regional hunting and fishing. It also is the service center for a large seasonal and weekend population with summer residences on surrounding lakes.

Grand Rapids was the first rural city in Minnesota to be served by an Advanced Life Support Ambulance Service, [http://www.meds-1.com/ Meds-1 EMS] .

Grand Rapids is where store manager Mark Bondhus came up with the idea of garlic cheese bread in 1979.Fact|date=April 2008

Grand Rapids has one of the few competitive high school marching bands north of the Twin Cities. Schools include:

All the schools except St. Joseph's, Grace Christian School, Christian Community School, and ICC are part of

The city of Grand Rapids sits on the junction of U.S. Routes 2 and 169. Highway 2 runs west towards Bemidji and east towards Duluth. Highway 169 heads south to Hill City, and ultimately towards Minneapolis, . In the other direction, Highway 169 heads up the until it reaches Virginia, Minnesota, passing through Hibbing and several other smaller towns along the way. Grand Rapids is also the starting point of State Highway 38, running north along the "Edge of the Wilderness Scenic Byway" towards Bigfork, . State Highway 38 has been designated a by the .

Grand Rapids is also located at a junction of the .

Grand Rapids is the of , a county that contains over 1000 lakes.

There were 3,446 households out of which 25.6% had children under the age of 18 living with them, 41.5% were married couples living together, 11.8% had a female householder with no husband present, and 43.6% were non-families. 38.1% of all households were made up of individuals and 20.4% had someone living alone who was 65 years of age or older. The average household size was 2.15 and the average family size was 2.82.

The following radio stations are licensed by the FCC to Grand Rapids. The city is also served by many other radio stations from around the northland.
* KOZY 1320 AM Talk radio, Oldies
* 96.9 FM Soft Rock,
* 91.7 FM Public Radio (first rural public radio station in the United States)
* 96.1 FM Country
* Deer River 105.5FM Rebroadcast of Duluth, MN except for commercials and community calendar, which are local.

Grand Rapids TV is primarily fed in from Duluth TV stations. However, some cable subscribers receive Minneapolis stations as well.