Moorabbin Oval, also known by its sponsorship name of Linen House Oval, is an Australian Rules Football ground in the city of Melbourne, Victoria, Australia at Linton Street in the suburb of Moorabbin.

The ground is notable for being the home of the St Kilda Football Club and a former VFL/AFL match venue when it hosted St Kilda home games.

The oval was first used by the Moorabbin Football Club which moved to the new ground from nearby Cheltenham in the 1950s.

In 1963 the ground was sold to VFL/AFL club St Kilda Football Club who relocated their training and administration headquarters from the Junction Oval to the facility in 1965.

The ground was subsequently redeveloped with a large grandstand and standing areas to facilitate VFL/AFL matches.

St Kilda Football Club's move to Moorabbin Oval was seen as highly successful. In its first season at the new ground the club played in front of capacity crowds. The Saints first ever home game at Moorabbin attracted a record crowd of 51,370 against Collingwood in Round 1, 1965 - a record that was never broken. St Kilda won its first premiership a year later in 1966.

St Kilda ceased playing home games at Moorabbin Oval in 1992 and began playing home fixtures at Waverley Park. The final AFL match for premiership points was in Round 20 of the 1992 AFL Premiership Season between St Kilda Football Club and the Fitzroy Lions. The most recent practice match was played in 2005 between St Kilda and North Melbourne Kangaroos which attracted 4,500 spectators.[1] The ground is used for occasional St Kilda Football Club training matches.

After home games ceased being played at Moorabbin Oval, the ground was extensively renovated to provide training, administration and entertainment facilities within the Huggins Stand and a heritage museum. Moorabbin Oval remains the club's training, administration and entertainment base. The G.G. Huggins Stand has three internal floors that contain player rooms, a fully equipped player gymnasium, football department meeting rooms, administration offices, a membership department, gaming room and bar, the Trevor Barker Room (a function room with a bar), club shop, trophy and memorabilia display areas and other facilities.

A new additional training and administration facility for the Saints, Linen House Centre in Seaford near Frankston, approximately 21 kilometers from Moorabbin, is currently under construction and is expected to be completed in 2010 at a cost of approximately 10.45 million dollars. The development is a St Kilda Football Club development in conjunction with the Frankston City Council, the State Government Of Victoria and the AFL.

Moorabbin Oval was the home of the Melbourne Reds in the former Australian Baseball League from 1994 to 1999. 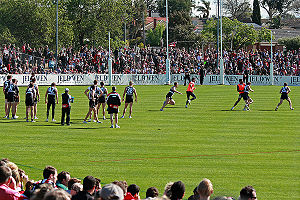 An estimated crowd of 10,000[2] packed into Moorabbin Oval to watch St Kilda Football Club train prior to the 2009 AFL Grand Final 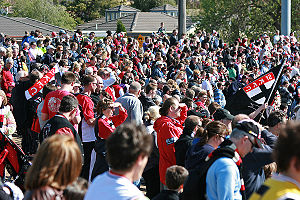 Memories of the old days - some of the estimated 10,000 strong crowd[2] on the site of the former stands watching St Kilda train prior to the 2009 AFL Grand Final

An abandoned Moorabbin Oval was the site of a police targeting sniper in Season 1 Episode 3 of the Melbourne-based police drama Rush.