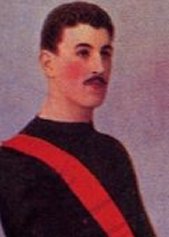 Results and statistics for the Victorian Football League season of 1901.

In 1901, the VFL competition was comprised of eight teams of 18 on-the-field players each, with no "reserves", although any of the 18 players who had left the playing field for any reason could later resume their place on the field at any time during the match.

Once the 14 round home-and-away season had finished, the 1901 VFL "Premiers" were determined by the specific format and conventions of the original "Argus" system.

* In the last home-and-away match between South Melbourne and Geelong, field umpire Henry "Ivo" Crapp experiments with clearly calling out his decisions.
* In Essendon's "Grand Final" victory against Collingwood, kicks three of Essendon's six goals. One of his goals was scored with an 86-yard (79 m.) drop-kick, and another (measured immediately after the match) was scored with a 93-yard (85 m.) place-kick into a strong head wind.
* VFL institutes the original "Argus" system to determine the season's premiers.