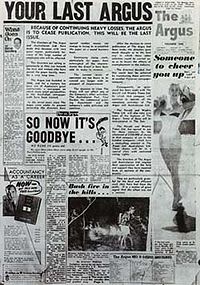 The final issue of The Argus.

The Argus Building, built in 1924 on La Trobe Street as the headquarters for the paper to the design of Godfrey & Spowers

The Argus was a morning daily newspaper in Melbourne established in 1846 and closed in 1957. Widely known as a conservative newspaper for most of its history, it adopted a left leaning approach from 1949. The main competitor over the life of the newspaper was David Syme's more liberal-minded The Age newspaper.

The newspaper was originally owned by William Kerr, a journalist who had worked with the Sydney Gazette before moving to Melbourne in 1839 to work on John Pascoe Fawkner's Port Phillip Patriot. The first edition was published on 2 June 1846.

During the Depression in 1933 it launched the Melbourne Evening Star in competition with The Herald newspaper of The Herald and Weekly Times Ltd, but was forced to close the venture in 1936.

In 1949 the paper was acquired by the London based Daily Mirror newspaper group. On 28 July 1952 the Melbourne Argus became the first newspaper in the world to publish colour photographs in a daily paper.The paper had interests in radio and in 1956, the new medium of television broadcasting, being part of the consortium General Telecasters Victoria (GTV), and the GTV-9 television station. In 1957 the paper was sold to the Herald and Weekly Times group, under the management of Chief Executive Keith Murdoch (Rupert's father), who utilised the printing presses, but closed the Argus and sold off the broadcasting interests. The last edition was on 19 January 1957.

The Argus building, constructed in 1926 on the corner of La Trobe and Elizabeth streets, is classified by the National Trust and is on the Victorian Heritage Register of Heritage Victoria.[1] In 1991, an innovative office building was built next door and named The Argus Centre, an award winning building by Nonda Katsalidis.[2] In 2004 La Trobe University bought the site of the old Argus building with the intention to redevelop and house legal and business schools in the building, as well as a ground floor shopping precinct.[3]