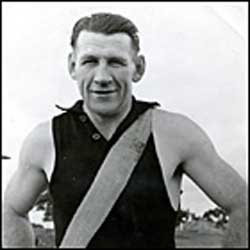 Results and statistics for the Victorian Football League season of 1943.

*Geelong were still unable to field a team due to the war, so the bye was retained.

A new system was introduced so that each team received only one bye.

There were still 16 rounds. The first 11 had every team competing - after round 11, the bottom placed team would drop out, and a new byeless draw would be made.

In 1942, the VFL competition consisted of eleven teams of 18 on-the-field players each (Geelong did not field a team due to wartime rail and road transport restrictions), plus one substitute player, known as the 19th man. A player could be substituted for any reason; however, once substituted, a player could not return to the field of play under any circumstances.

Teams played each other in a home-and-away season of 16 rounds. During the first 11 rounds each team played each other once and had one bye. At round 11, the eleventh team on the ladder dropped out of the competition. In the remaining rounds (12 to 16), all of ten teams played 5 matches each.

The determination of the 1942 season's fixtures were greatly complicated by the fact that the , the Lake Oval, the Western Oval, and the had all been appropriated for military use, and that Melbourne now shared the with Richmond as their home ground, South Melbourne now shared Princes Park with Carlton as their home ground, and that St Kilda and Footscray now played their home games at and respectively (this was possible because there was no VFA competition in 1942).

Once the 16 round home-and-away season had finished, the 1939 VFL "Premiers" were determined by the specific format and conventions of the "Page-McIntyre system".

* Hawthorn's coach renames the club "The Hawks" from "The Mayblooms".
* In the spiteful round 1 match between Essendon and South Melbourne a vicious brawl broke out in the last quarter when South Melbourne's felled (apparently in a square-off retribution for Leehane's similar action against Williams in the 1942 Preliminary Final), involving a dozen players, officials, trainers, police, and many spectators.
**Only three players were reported. Williams was received an eight week suspension for striking Leehane, , , and . South Melbourne's 1940 winner was suspended for four weeks for striking . Perc Bushby was suspended for two weeks for striking Williams.
* The VFL suspends its round 12 matches and conducts a one-day "lightning" carnival; the 1941 Victorian Football League Patriotic Match Cup is won by Essendon.
* In round 5, makes his debut for Melbourne in a team that also contains his brothers Don and Ted.
* Munitions worker plays for Carlton in round 15 despite losing the top of his finger during the week in a workplace accident.
* Richmond's centre half-forward went Absent Without Official Leave (AWOL) from his Army duties in order to play in the 1943 Grand Final. He was arrested by the Military Police upon his arrival at Princes Park, and it was only through some very persuasive talking by Richmond captain (himself a policeman with the Victorian Police Force) that Broadstock's commanding officer allowed him to play in the match. Broadstock went on to kick a goal and be one of Richmond's best players.