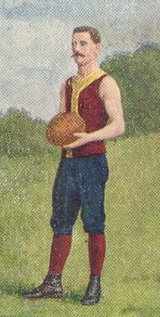 Results and statistics for the Victorian Football League season of 1904.

In 1904, the VFL competition was comprised of eight teams of 18 on-the-field players each, with no "reserves", although any of the 18 players who had left the playing field for any reason could later resume their place on the field at any time during the match.

Once the 14 round home-and-away season had finished, the 1904 VFL "Premiers" were determined by the specific format and conventions of the amended "Argus" system".

* The final home-and-away match between South Melbourne and Fitzroy at the was a torrid affair; of South Melbourne and Harry Clarke of Fitzroy were each suspended for three matches, whilst South Melbourne's who had run amok during the match, charging at players and punching them in the face, was suspended for the remainder of the 1904 season and the whole of the 1905 season.
* After the drawn match between Geelong and Carlton at on 9 July 1904, a spectator is arrested for attacking the field umpire, Henry "Ivo" Crapp.
* The VFL introduces boundary umpires.
* In round four, Essendon plays Melbourne in Sydney in front of only 6,000 spectators at the , loses to Melbourne, takes five days to return to Melbourne by sea, then loses again to Fitzroy in their Saturday's round five match.
* In the Final Premiership match Carlton was surging ahead of Fitzroy, and one of the Carlton forwards (Ross, 1996, does not name him, but it was most likely ) took a powerful high overhead mark with his knees in his opponent's back. The field umpire, Henry "Ivo" Crapp, obeying the VFL rules of the day, paid a free kick to the Fitzroy player for "interference". Fitzroy steadied and went on to win the game. There was such an outcry after the match that the VFL immediately amended its rules to allow for what it now termed "unintentional interference".