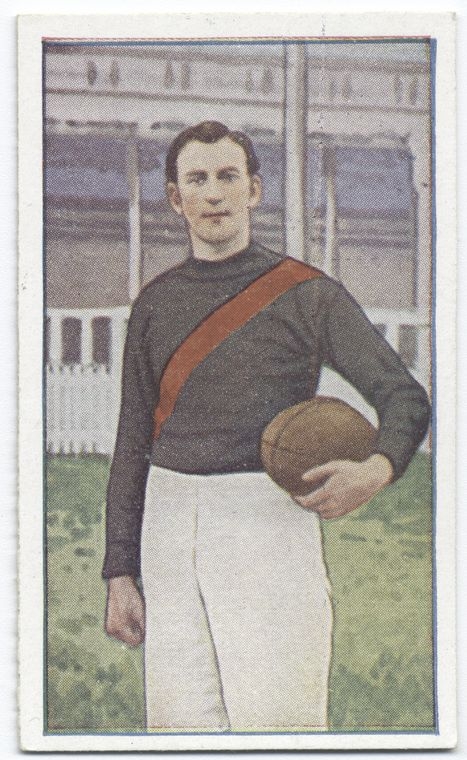 In 1923, the VFL competition had nine teams of 18 on-the-field players each, with no "reserves", although any of the 18 players who had left the playing field for any reason could later resume their place on the field at any time during the match.

Once the 18 round home-and-away season had finished, the 1923 VFL "Premiers" were determined by the specific format and conventions of the amended "Argus" system".

* The 1923 VFL Premiership team was Essendon.
* The VFL's leading goalkicker was of Essendon with 68 goals.
* "The Argus" newspaper's "Player of the Year", of Essendon, was declared 1923 Champion of the Season.
* Melbourne took the "wooden spoon" in 1923.

* New scoreboards are erected at each home ground by the VFL's publication, "The Football Record". With the help of a key published in that Saturday afternoon's "Record", spectators can decipher the coded quarter-by-quarter scores of the other three matches as they appear on these scoreboards throughout the afternoon.
* After the round 13 match against Essendon at Windy Hill, at an after-match function in the Esendon rooms, Carlton rover George Bolt and backman (who had not played in that game) came to blows. The Carlton Committee met the next day and suspended both players indefinitely. Bolt never played for Carlton again (he reappeared with Hawthorn in 1925, then he played for North Melbourne in 1926 and 1927); Jack Morrissey played his next game for Carlton on 27 June 1925 (round 9).
* The 1922 Victorian Interstate team captain, and Carlton star ruckman, was overheard being intensely critical of the Carlton captain-coach at the same function. The Carlton Committee was upset at such behaviour occurring on the premises of another club, and suspended Boromeo immediately; eventually, in 1926, Carlton cleared Boromeo to Richmond for whom he played 14 games.
* The Essendon Premiership team was known as the "Mosquito Fleet", due to the number of small, very fast players in the side. Six were 5'6" (167 cm) or less: 5'1" (155cm), who played his first VFL game at the age of 34, 5'5" (165cm), 5'5" (165cm), Frank Maher 5'6" (167.5cm), 5'6" (167.5cm), and Jimmy Sullivan 5'6" (167.5cm).
* The Challenge Final match had to be postponed for a week as the was under water due to intense rain. This meant that the Challenge Final was played on Saturday 20 October 1923, Caulfield Cup Day.