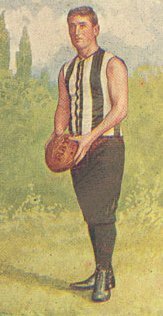 Results and statistics for the Victorian Football League season of 1902.

In 1902, the VFL competition was comprised of eight teams of 18 on-the-field players each, with no "reserves", although any of the 18 players who had left the playing field for any reason could later resume their place on the field at any time during the match.

Once the 14 round home-and-away season had finished, the 1902 VFL "Premiers" were determined by the specific format and conventions of the amended "Argus" system.

* The 1902 VFL Premiership team was Collingwood.
* The VFL's leading goalkicker was Ted Rowell of Collingwood with 33 goals.
* Despite having been accused of "tanking" in Collingwood's (24 May) fourth home-and-away match against Fitzroy, "The Argus" newspaper's "Player of the Year", Collingwood's Ted Rowell, was declared 1902 Champion of the Season.
* St Kilda took the "wooden spoon" in 1902.

* Due to the on 1 January 1901, Victoria was no longer a "Colony". Thus, the former "Champion of the Colony" award was renamed the "Champion of the Season".
* The VFL institutes the amended "Argus" system to determine the season's premiers.
* Collingwood's Charlie Pannam becomes the first VFL player to play 100 VFL games (at the end of the 1902 season, he had played in 104 of the 106 VFL games that Collingwood had played since the VFL's first round of games in 1897).