Princes Park (stadium)
This article is about the football ground. For the park, see Princes Park, Carlton.

With a capacity of 35,000, the ground is the third largest Australian rules football venue in Melbourne after the Melbourne Cricket Ground and Docklands Stadium.

It is a historic venue, having been the home ground of the Carlton Football Club since the formation of the VFL/AFL in 1897. It has the second oldest grandstand associated with the VFL/AFL competition.

Princes Park was first used in 1897 by the Carlton Football Club, during the inaugural season of the AFL/VFL. The club went on to win 673 of its 971 VFL/AFL games at the venue.[citation needed]

The Alderman Gardiner Stand was designed in 1903 and completed in stages between 1909 and 1913. The mostly iron stand with original cast iron columns remains the second oldest to be associated with the VFL/AFL competition.

The Robert Heatley Stand was officially opened by Alderman Sir William Brunton on Saturday, 7 May 1932.[1]

Princes Park was the venue for the second Ashes test of the 1992 Great Britain Lions tour, in which the visitors defeated Australia 33 - 10.

The ground became known as Optus Oval in 1994 due to a naming rights deal with telecommunications company Optus.

Work on the Legends Stand began in 1995 and was completed for opening on 25 April 1997. The roof, with its curved modern structure, ensured that the oval was now enclosed with a roof all the way around its circumference.

The first naming rights deal lapsed at the end of the 2005 season, and Optus declined to renew, citing the ground's lower profile now that AFL matches were no longer played there. In April 2006, it was announced that the naming rights for the stadium had once again been awarded, this time for a two-year term, during which the stadium was known as MC Labour Park.

In 2005, it was decided to discontinue the use of the ground for AFL home and away games. A farewell AFL game was played at Princes Park on Saturday 21 May 2005. The game was contested between Carlton and Melbourne. It was the last of the suburban grounds in Melbourne to be used in the AFL. The result was an 18 point win to Melbourne.

In January 2006, Graham Smorgon, ex-president of the Carlton Football Club, prepared a A$67 million redevelopment proposal involving the demolition of most of the stands, returning much of the ground to parkland and the establishment of club training facilities and community centre.[2] The proposal was controversial as it was presented to the media before local authorities and was made at a time when the club was struggling under the weight of heavy financial debt. Cynics branded it as an attempt by an arrogant Carlton board to rally member votes. This failed miserably as Smorgon was voted off the board by club members at the very next club election, on 2 February 2007 and his plans were scrapped immediately by the remaining board members.

On 7 June 2006 it was announced that Visy Park would receive a A$15.7m redevelopment to provide the Carlton Football Club with elite training and administration facilities. The proposed redevelopment will provide state-of-the-art facilities exclusively for Carlton, including: 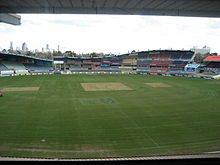 View taken from the media box in 2007

Although the ground was the permanent home to the Carlton Football Club from mid-1897 until 2005, Princes Park has hosted several other Australian rules football teams. Most notably, Hawthorn played its home games there for eighteen years between 1974 and 1991 after leaving Glenferrie Oval; Fitzroy spent two short stints at the ground between 1967–1969 and 1987-1993 after leaving Brunswick St Oval; the Western Bulldogs spent three years there from 1997-1999 after leaving Whitten Oval, and; South Melbourne temporarily shared the ground from 1942-1943 when Lake Oval was used during the second world war. It has also seen service in the final series of several seasons, most notably in 1945, when the VFL Grand Final was played there, creating the record crowd for the ground of 62,986. The ground was also used briefly as a venue for games expecting low crowds in the early 2000s, but this was unpopular and short-lived. More recently, the ground has hosted Victorian Football League Grand Finals up to 2007, and was until 2010 the home ground of the newly created VFL side of the Collingwood Football Club, which is ironic considering that Collingwood and Carlton are bitter rivals in the AFL.

Other sports, including soccer, cricket, boxing and rugby, have also been played there. The ground was also host to a production of the opera Aida.

For the 2006 NRL season onwards, Visy Park is also the administrative headquarters for the Melbourne Storm rugby league club. The club relocated to the temporary home while plans were being made for the construction of a new purpose-built rectangular stadium next to the then-current Melbourne Storm home ground, Olympic Park Stadium.

The appointment of Richard Pratt as President had renewed speculation that it may again be used by the Carlton Football Club as a home ground in the future. This is unlikely to happen as Pratt stood down as President in June 2008 and died in April 2009, and two of the six stands have been demolished to make way for a $15.7m elite training venue. In 2009 Carlton CEO Greg Swann publicly declared Carlton's intention to play home games at Visy Park again in the wake of poor financial returns at Etihad Stadium [3]