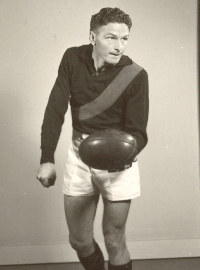 Results and statistics for the season of 1950.

In 1950, the VFL competition consisted of twelve teams of 18 on-the-field players each, plus two substitute players, known as the 19th man and the 20th man. A player could be substituted for any reason; however, once substituted, a player could not return to the field of play under any circumstances.

Teams played each other in a home-and-away season of 18 rounds; matches 12 to 18 were the "home-and-way reverse" of matches 1 to 7.

Once the 18 round home-and-away season had finished, the 1950 VFL "Premiers" were determined by the specific format and conventions of the "Page-McIntyre system".

* The 1950 VFL Premiership team was Essendon.
* The VFL's leading goalkicker was John Coleman of Essendon with 120 goals (including 8 goals in the final series).
* The winner of the 1950 was of Fitzroy with 21 votes.
* Hawthorn took the "wooden spoon" in 1950.

* In the early 1950 pre-season, veteran Collingwood coach announces that he will retire. Collingwood called for applications for a non-playing coach. Champion ruckman , much loved by all at Collingwood (especially ), immediately announced his retirement and applied for the job. On the Thursday before the last pre-season practice match (i.e., 13 April), the Collingwood committee announced that it had appointed the (then) coach of the Collingwood Second Eighteen team, [http://stats.rleague.com/afl/stats/players/B/Bervyn_Woods.html] — who had been sold to Collingwood (along with [http://stats.rleague.com/afl/stats/players/H/Harry_Jones.html] ) in 1935 by the cash-strapped VFA club Brunswick — as coach, by the casting vote of the President Harry Curtis. The announcement was greeted with incredulity, resentment, and anger, because the decision surely meant that Kyne (the supporters' choice for the job) would have to go elsewhere to realize his coaching ambitions. At Collingwood's final practice match (Saturday 15 April) the crowd continuously jeered at Woods, and those members of the Collingwood committee that had voted for him were in great physical danger. Meanwhile Kyne was carried around the ground in great majesty on the shoulders of the crowd. On Sunday (16 April) Woods withdrew his application and reverted to coaching the Second Eighteen. Thus, with a reign of 5 days, Woods remains the VFL/AFL coach with the shortest-ever tenure. Phonse Kyne was appointed coach following Woods' resignation. Over the 1950 season he played seven matches; he then retired. He coached Collingwood for 14 consecutive seasons (1950-1963). Within days of Woods' retirement, a special extraordinary meeting of Collingwood Football Club members was held at the Collingwood Town Hall, and those seen to be responsible for the appointment of Woods (viz., Harry Curtis, Frank Wraith, and Bob Rush) were voted out of office. Collingwood won nine matches and lost nine matches in the 1950 season despite all of these internal troubles.
* In round 17, John Coleman kick his 100th goal for the season in his sixteenth match of the season (he did not play in the split round 14 because he was in Brisbane playing for Victoria).
* reached the for the first time since joining the VFL in 1925. [http://en.wikipedia.org/wiki/Les_Foote#First_Grand_Final]
* wins the First Eighteen, Second Eighteen, and Third Eighteen premierships in 1950.