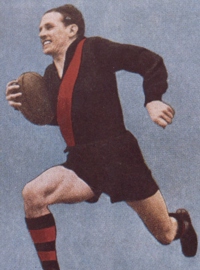 Results and statistics for the Victorian Football League season of 1946.

In 1946, the VFL competition consisted of twelve teams of 18 on-the-field players each, plus two substitute players, known as the 19th man and the 20th man. A player could be substituted for any reason; however, once substituted, a player could not return to the field of play under any circumstances.

Teams played each other in a home-and-away season of 19 rounds; matches 12 to 19 were the "home-and-way reverse" of matches 1 to 8.

Once the 19 round home-and-away season had finished, the 1946 VFL "Premiers" were determined by the specific format and conventions of the "Page-McIntyre system".

* The 1946 VFL Premiership team was Essendon.
* The VFL's leading goalkicker was of Essendon with 66 goals (including 8 goals in the finals series).
** of Collingwood kicked 63 goals in the home-and-away season — thus, if there had been such a thing as a in 1946, he would have won it.
* The winner of the 1946 was of Melbourne with 20 votes.
** Cordner was the first of the only two amateur players ever to win the Brownlow Medal, the second was Footscray Football Club's , also a ruckman, in 1960.
* Hawthorn took the "wooden spoon" in 1946.

* The ANFC rejects a joint proposal from New South Wales and Tasmania to introduce a "send off" rule for foul play.
* The VFL introduced a second substitute player, known as the 20th man; this meant that a team was now comprised of 18 "run on" players, and two "reserves" on the bench. A player could be substituted for any reason (not just if he was injured and unable to continue). Once substituted, a player could not return to the field of play under any circumstances.
** As with the 19th man, the 20th man was only paid a match fee in the event that he took the field.
* The VFL introduces a new Under-19 competition, the teams are referred to as the Third Eighteens.
* The VFL resumes the award.
* The first half of round 1 is played on Easter Saturday, the second half on Easter Monday.
* In round 1, 33 year old former champion full-forward returns to South Melbourne after playing for VFA club Coburg (1940-1941) and serving in the (1942-1945). He kicks two goals before badly injuring a leg. He never plays again.
* In a very windy round 8 match, North Melbourne beat Melbourne 9.2 (56) to 3.9 (27) despite not scoring at all in either the first or the third quarter of the match.
* From ninth position on the ladder at the end of round 8, Melbourne win 13 of their next 14 matches and play in the Grand Final.
* At half time in the closely contested Grand Final, a straighter-kicking Melbourne 10.4 (64) was three points in front of Essendon 9.7 (61); in the third quarter Essendon kicked 11.8 (74) to Melbourne's 1.1. (7).