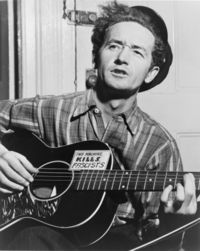 The music of Oregon reflects the diverse array of styles present in the music of the United States, from Native American music to the contemporary genres of rock and roll, country, rhythm and blues, jazz, pop, electronic music, and hip hop. However, throughout most of its history, the state has been relatively isolated from the cultural forces shaping American music. Much of modern popular music traces its roots to the emergence in the late 19th century of African American blues and the growth of gospel music in the 1920s. African American musicians borrowed elements of European and indigenous musics to create new American forms. As Oregon's population was more homogeneous and more white than the United States as a whole, the state did not play a significant role in this history.

The state's main contributions to American popular music began in the 1960s, when The Kingsmen and Paul Revere & the Raiders established Oregon as a minor center of frat rock and garage rock. This led in one direction to the blues-rock tradition of the Robert Cray Band and Curtis Salgado, and in another direction to the hardcore punk scene of the early 1980s Pacific Northwest, led by the Wipers in Portland and like-minded bands in Seattle and Vancouver, BC. Over the next twenty years, punk rock evolved into grunge, riot grrrl, alternative rock, and, eventually, indie rock. In the last decade, Oregon has made a unique contribution to American independent music, with a strong indie music scene developing in Portland. The city's reputation as a hipster mecca has paralleled the rise of local indie musicians such as The Decemberists, Gossip, The Dandy Warhols, M. Ward, and the late Elliott Smith. Floater is Portland's leading example of an indie band. They have remained unsigned to a major label for over 17 years and have managed to be voted the best band of Portland for 2009 in addition to frequently selling out major venues like the Crystal Ballroom and the Aladdin Theater.[1][2][3] Other prominent musicians have relocated to Portland, including Modest Mouse (of Seattle), Sleater-Kinney (of Olympia, Washington), The Shins (of Albuquerque, New Mexico), Spoon (of Austin, Texas), and former Pavement leader Stephen Malkmus (of Stockton, California).

The state also has a unique rural-urban dynamic, which has influenced the development of local bluegrass, folk, and alternative country music. Jam bands have a strong presence in the state, dating back to Grateful Dead performances at the Oregon Country Fair, and outdoor music festivals continue to be popular. Portland's Waterfront Blues Festival is the second largest blues festival in the country. Prominent cultural institutions include the Oregon Bach Festival, Oregon Festival of American Music, Oregon Symphony, and Mt. Hood Jazz Festival.

The Kingsmen, best known for their 1960s rock classic "Louie, Louie", were originally from Portland, and Paul Revere & the Raiders gained popularity in Portland after relocating there from Idaho.

Seafood Mama was a 1970s jazz band, with singer Rindy Ross, with a substantial local following that tried for national success as Quarterflash. The band was unable to find much success after its first album.

Another Portland band that reached a national audience was Nu Shooz.

Portland had one of the most vibrant hardcore punk scenes in the early 1980s Pacific Northwest, rivalled only by Seattle and Vancouver. The Wipers and Poison Idea are the best known representatives of the scene, especially The Wipers, a major grunge influence. These bands played at The Met (now Dante's) and The Satyricon, and were connected with cult comedian Bill Hicks[citation needed]. Other hardcore bands in the 1980s included Poison Idea, The Wipers, Lockjaw, Final Warning, and The Rats. Hole frontwoman Courtney Love grew up in Portland, and was active in the city's punk scene at the time.[4] She initially met Nirvana frontman Kurt Cobain at the Satyricon club in 1989.

The 1990s led to bands such as Defiance, Resist, Bugskull, Detestation, and Tragedy. Another important Portland cult classic were the Exploding Hearts in the early 2000s, while Dead Moon developed a cult worldwide following with their garage-country punk, starting from the early 1990s.

Portland is home to a thriving bluegrass and old-time music scene. Popular Portland bands include Foghorn Stringband, Jackstraw, and The Water Tower Bucket Boys. Banjo player Tony Furtado and fiddler Darol Anger, who have both branched out from traditional bluegrass music into progressive bluegrass, jazz, and other genres, currently live in Portland.

Portland is home to a thriving world music and international folk dancing scene.[citation needed] including the acclaimed Al andalus ensemble. Central Africa is represented by such groups and artists as Obo Addy (Ghana), Jujuba (Nigerian Afrobeat), and Boka Marimba (Zimbabwe). Eastern Europe and the Middle East has music and dance representation through groups such as Vagabond Opera, Kafana Klub, Krebsic Orkestar & Balkan Fusion Project, The Underscore Orkestra, Balkan And Beyond, Kef, The Mora, Vequinox, 3 Leg Torso and Chervona.

In recent years, a number of indie music bands from Portland which have played local venues have won recording contracts with promoters such as Partisan Records and Knitting Factory Records and have been touring nationally and include Emil Amos of Holy Sons,[5] Sallie Ford and the Sound Outside,[6] AgesandAges,[7] Ash Black Bufflo,[8] Dolorean,[9] and others.

Eugene had a thriving local music scene in the early 1990s that slowly died out in the early 2000s as many of the local musicians became frustrated with the lack of interest in the scene from outside entities. The Eugene scene in the 1990s consisted of several bars, an anarchist teahouse, Icky's, and almost nightly basement shows. There were several houses that were basically music venues that were notorious enough for larger independent acts to stop at them while on tour in the Northwest. Icky's Teahouse was a stop for acts such as Jawbreaker, Green Day, AFI, Defiance, UK Subs, Mukilteo Fairies (now known as …And You Will Know Us by the Trail of Dead), and F.Y.P. More mainstream venues include the W.O.W. Hall, the EMU Ballroom, the Hult Center for the Performing Arts, Cuthbert Amphitheater, The Shedd, Sam Bond's Garage, Beall Concert Hall and McDonald Theatre.

The ska-swing-funk band the Cherry Poppin' Daddies were formed from the ashes of Eugene psychedelia band Saint Huck in 1989. The Daddies gained a large Northwest cult following during the early 1990s, conversely attracting harsh criticism from protesters who perceived the band as sexist and obscene. The Daddies rose to mainstream notoriety with the ska and swing revivals of the late 1990s. The group continues to be based in Eugene, along with their side projects, the glam punk outfit White Hot Odyssey and the piano rock trio The Visible Men.

Floater was formed in 1993 and made their start playing garage parties and at the University of Oregon. Now residing in Portland,[14] Floater has released eight studio albums, plus three live albums on indie label Elemental Records. They have also received nominations to the preliminary level of the Grammys from NARAS in 1995 under Best Rock Performance for their first album Sink and in 1996 under Best Alternative Performance for their second album Glyph.[15]

Guitarist John Fahey moved to Salem in 1981 and died there in 2001 at the age of 61. He is buried at Restlawn Memory Gardens, just west of Salem. Larry Norman, who some call the "Father of Christian Rock" lived in Salem until his death in early 2008. The band "40 Ways From Sunday" from Oakland, Oregon wrote a song in early 2007 paying respects to Larry Norman, even knowing they are a largely agnostic punk rock group. Native American jazz sax player Jim Pepper was born in Salem in 1941 and lived for two years at Chemawa Indian School, where his mother and father were employed.

Salem and the surrounding cities also have had a large influence on the Portland and Northwest music scenes since the 1990s. The majority of the members of nationally recognized alternative rock bands Blitzen Trapper, Dharma Bums and Typhoon were originally from the Salem area and got their start in the Salem music scene, playing at venues like The Grand Theatre, Jimi's Guitar Planet, The Ike Box, The Governor's Cup, The Knights of Columbus Hall and The Space. Ryan Neighbors, keyboardist of rock band Portugal. The Man is from Salem, and was the frontman of defunct experimental rock outfit Shepherds of Ontario, which frequented many Salem venues in the 2000s. Joe Preston, who was the bassist for The Melvins and High On Fire, and now performs solo as Thrones, grew up in Salem.