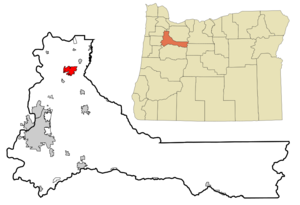 Woodburn is a city in Marion County, , . The population was 20,100 at the 2000 census. It is part of the Salem Metropolitan Statistical Area.

Woodburn, historically a farming community, was founded by Jesse H. Settlemier in 1889. The is now a museum located on Settlemier Avenue. Lewis McArthur recorded in "" that according to Charles E. Nebergall, Woodburn was named for a slash burn that got out of control and burned down a nearby woodlot in the 1880s, after the railroad line had been laid through the area.

There were 6,274 households out of which 34.6% had children under the age of 18 living with them, 58.1% were married couples living together, 8.7% had a female householder with no husband present, and 28.4% were non-families. 23.9% of all households were made up of individuals and 16.5% had someone living alone who was 65 years of age or older. The average household size was 3.11 and the average family size was 3.63.

Woodburn is also home for a sizeable community of Russian Orthodox Old Believers, who number between a quarter and a third of the population.Fact|date=March 2008

Woodburn is home to KPCN-LP, a low power station owned and operated by Oregon's largest farmworker union - [http://www.pcun.org los Pineros y Campesinos Unidos del Noroeste] (PCUN). The station was built by volunteers from Woodburn and around the country in August 2006 at the tenth barnraising. KPCN broadcasts music, news, and public affairs to listeners in Spanish and several indigenous Latin American languages.

The arts in Woodburn

of the punk band Babes in Toyland, grew up in Woodburn. Her first performance was at the now-closed tavern Flight 99.

The is a 1/4 mile dragstrip that annually hosts an event on the NHRA Lucas Oil Series.

In August 1999, opened in Woodburn. This is an with many name-brand clothing companies represented, including , Nike, Gap, and . With around 4 million shoppers annually, this shopping mall is one of the most visited attractions in the state of Oregon, second only to the various throughout the state.Fact|date=April 2007

is on on the outskirts of Woodburn, in which delinquent and criminal boys are incarcerated.

The Oregon Golf Association (OGA) Golf Course in Woodburn is a public course, rated by "" in 1996 as one of the top ten affordable courses in the US [ [http://www.ogagolfcourse.com OGA Golf Course Homepage] ] . It routinely hosts many large amateur and high school events in the state.