Crystal Ballroom, originally built as Cotillion Hall, is a historic building in Portland, Oregon, United States. Cotillion Hall was built in 1914 as a ballroom, and dance revivals were held there through the Great Depression. Starting in the 1960s, the hall has also been host to many popular pop, rock, folk, blues and jazz artists, as well as beat poetry and other entertainment.

Originally owned by Montrose Ringler, the ballroom fell victim to heavy persecution of jazz and dance and Ringler lost the ballroom in the early 1920s. The ballroom was bought by Dad Watson in the mid 1920s, and largely held square dances during that period. After Watson's death in the 1930s, Ralph Farrier bought the ballroom and renamed it the Crystal Ballroom. He continued in Watson's footsteps, holding square dances through the 1950s.

In the early 1960s, due to flagging revenues, new acts were brought in, such as gypsy brass bands and R&B performers, such as James Brown, Marvin Gaye, and Ike & Tina Turner.

In 1967, largely psychedelic acts such as the Grateful Dead, Blue Cheer, and The Electric Prunes performed in the ballroom. This was cut short in 1968, due to concerns about what such music was doing to the youth of Portland.

From the 1970s through the mid 1990s, the ballroom was not used for any public events. It became a residence for squatters, artists and bohemians, who used it as studio space, and occasionally private invite-only parties were given. In 1979, the building was listed on the National Register of Historic Places as Cotillion Hall. 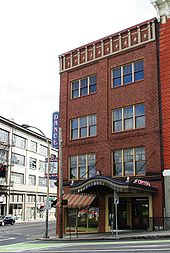 Entrance to the building

In 1997, the ballroom was re-opened by McMenamins, featuring a bar/restaurant on the first floor, a brewery and a new dance floor on the second floor, and the restored main ballroom on the third floor. The main ballroom features a mechanical "floating" dance floor, thought at the time of its building to be the only one on the West Coast, and is potentially the only one still in existence in the United States.[1]

There are ballroom dance lessons each Sunday[2] available to the public.