/ɒsˈwiːɡoʊ/) is a city located primarily in Clackamas County in the U.S. state of Oregon. Small portions of the city are also located in neighboring Multnomah and Washington counties.[3] Located south of Portland surrounding the 405-acre (1.64 km2) Oswego Lake, the town was founded in 1847 and incorporated as Oswego in 1910. The city was the hub of Oregon's brief iron industry in the late 19th century and is today an affluent suburb of Portland. As of the 2010 census, the city had a total population of 36,619,[4] a 3.8% increase over the 2000 population of 35,278.

The Clackamas Indians once occupied the land that later became Lake Oswego,[5] but diseases transmitted by European explorers and traders killed most of the natives. Before the influx of non-native people via the Oregon Trail, the area between the Willamette River and Tualatin River had a scattering of early pioneer homesteads and farms.

As settlers arrived, encouraged by the Donation Land Claim Act of 1850 and the subsequent Homestead Act, they found the land under-occupied.

Albert Alonzo Durham founded the town of Oswego in 1847, naming it after Oswego, New York.[6] He built a sawmill on Sucker Creek (now Oswego Creek), the town's first industry.[5]

In 1855, the federal government forcibly relocated the remaining Clackamas Indians to the Grand Ronde Indian Reservation in nearby Yamhill County.[5]

During this early period in Oregon history, most trade proceeded from Portland to Oregon City via the Willamette River, and up the Tualatin River Valley through Tualatin, Scholls, and Hillsboro. The thick woods and rain-muddied roads were major obstacles to traveling by land. Along the rivers of this area can still be seen the vestiges of river landings, ferry stops, and covered bridges of this period. A landing in the city's present-day George Rogers Park is thought to have been developed by Durham around 1850 for lumber transport; another landing was near the Tryon Creek outlet into the Willamette. 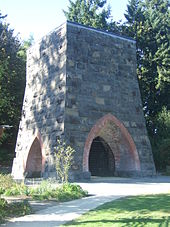 In 1865, prompted by the earlier discovery of iron ore in the Tualatin Valley, the Oregon Iron Company was incorporated. Within two years the first blast furnace on the west coast was built, patterned after the arched furnaces common in northwestern Connecticut, and the company set out to make Oswego into the Pittsburgh of the West.[7] In 1878, the company was sold off to out-of-state owners and renamed the Oswego Iron Company, and in 1882, Portland financiers Simeon Gannett Reed and Henry Villard purchased the business and renamed it the Oregon Iron and Steel Company.[8]

The railroad arrived in Oswego in 1886, in the form of the Portland and Willamette Valley Railway. A seven-mile-long line provided Oswego with a direct link to Portland. Prior to this, access to the town was limited to primitive roads and river boats. The railroad's arrival was a mixed blessing; locally, it promoted residential development along its path, which enabled Oswego to grow beyond its industrial roots. But nationally, the continued expansion of freight railroad system gave easy local access to cheaper and higher quality iron from the Great Lakes region. This ultimately led to the local industry's demise.[5][8]

By 1890, the industry produced 12,305 tons of pig iron,[citation needed] and at its peak provided employment to around 300 men. The success of this industry greatly stimulated the development of Oswego, which by this time had four general stores, a bank, two barber shops, two hotels, three churches, nine saloons, a drugstore, and even an opera house.[7]

The iron industry was a vital part of a strategy designed by a few Portland financiers who strove to control all related entrepreneurial ventures in the late 19th century. Control of shipping and railroads was held under the Oregon Steam Navigation Company, later to become the Oregon Railway and Navigation Company. This local monopoly responded to the area's increasing demand for iron and steel, and grew to play a key role in economic history throughout the area.

The Oregon Iron and Steel Company adapted to the new century by undertaking programs in land development, selling large tracts of the 24,000 acres (97 km2) it owned, and power, building a plant on Oswego Creek starting in 1905, and erecting power poles in subsequent years to supply power to Oswego citizens. With the water needs of the smelters tailing off, the recreational potential of the lake and town was freed to develop rapidly.[5]

In 1910, the town of Oswego was incorporated.[5] The Southern Pacific Railroad, which had acquired the P&WVR line at the end of the 19th century, widened it from narrow to standard gauge and in 1914, electrified it, providing rapid, clean, and quiet service between Oswego and Portland. The service was known as the Red Electric.[5]

Passenger traffic hit its peak in 1920 with 64 trains to and from Portland daily. Within nine years of the peak, passenger service ended and the line was used for intermittent freight service to Portland's south waterfront up until its abandonment in 1984. The line was preserved, however and the Willamette Shore Trolley provides tourist rides on the line today.

One of the land developers benefiting from sales by OI&S was Paul Murphy, whose Oswego Lake Country Club helped promote the new city as a place to "live where you play."[5] Murphy was instrumental in developing the first water system to supply the western reaches of the city, and also played a key role in encouraging the design of fine homes in the 1930s and 1940s that ultimately would establish Oswego as an attractive place to live. In the 1940s and 1950s, continued development helped spread Oswego's residential areas.[5]

Mass transit service after the end of electric interurban service was provided by Oregon Motor Stages, but that company suspended all operations following a drivers strike in 1954.[9] In 1955, a newly formed private company, Intercity Buses, Inc., began operating bus service connecting Oswego with downtown Portland and Oregon City.[10] This service was taken over by TriMet in 1970.

In 1960, Oswego was renamed Lake Oswego when it annexed part of neighboring Lake Grove.[5]

Oswego Lake is a private lake (an expansion of an earlier natural lake, named Waluga (wild swan) by Clackamas Indians[11]) managed by the Lake Oswego Corporation.[12] Houses with views of Oswego Lake and lake-shore property are very expensive.[citation needed] The lake is navigable, with a dock at the east end where boaters can disembark and walk to the nearby businesses. The main canal from the Tualatin River was dug in the early part of the century.[citation needed]

Every five to ten years, the water level in the lake is lowered several feet by opening the gates on the dam and allowing water to flow into Oswego Creek and on to the Willamette River, enabling lakefront property owners to conduct repairs on docks and boathouses.[13] In 2010, the lake was lowered approximately 24 feet (7.3 m) to allow for construction of a new sewer line, the lowest lake level since 1962 when the original sewer line was installed.[14]

The city extends up Mount Sylvania and through Lake Grove towards Tualatin.

The city has a council-manager form of government, which vests policy-making authority in an elected, volunteer city council. The council consists of a mayor and six councilors, all of whom are elected at-large and serve four-year terms.[citation needed]

Day-to-day operations are handled by an appointed, professional city manager. Almost all of the city's employees, which include part-time staff amounting to approximately 342 full-time equivalents,[citation needed] report to the city manager. This includes the police chief, fire chief, one assistant city manager, and the community development director. The biggest groups are:

The Mountain Park neighborhood, located between Oak Creek and Holly Orchard on its west side and Forest Highlands and Uplands on its east, has a homeowners' association serving the role of neighborhood association for its residents.

The following statistics summarize other aspects of civic involvement:[citation needed] 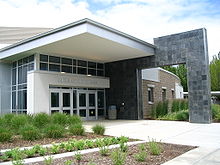 The Lake Oswego School District is within the city boundaries and serves the city's approximately 7,000 students, with a ratio of 23 students per instructor. The two high schools in the district are Lake Oswego High School and Lakeridge High School. There are nine elementary schools and two junior high schools for students in grade 7 and 8.[17]

The city maintains 573 acres (2.32 km2) of parks and open spaces. This includes 24 developed parks, one amphitheater, one swim park, one water sports center on the Willamette River, an adult community (senior) center, a public golf course (self-financed), an indoor tennis center, seven outdoor tennis courts, and five picnic shelters. An additional swim park is open to those who live in the boundaries of the old Lake Grove School District. The private Oswego Lake Country Club and neighboring equestrian riding club add to the recreational amenities of the city.

Lake Oswego has one public library, part of the Library Information Network of Clackamas County. For the past six years, the library has been rated among the top 10 libraries serving similar population sizes in the United States.[18][according to whom?]

This is a partial list of notable residents, past and present, of Lake Oswego:

Lake Oswego has one sister city: