Massachusetts is a U.S. state in New England. The music of Massachusetts has developed actively since it was first colonized by Britain. The city of Boston is an especially large part of the state's present music scene, which includes several genres of rock, as well as classical, folk, and hip hop music. 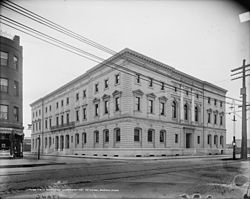 Perhaps the most influential early composer of the United States was Lowell Mason. A native of Boston, Mason campaigned against the use of shape-note notation, and for the education in standard notation. He worked with local institutions to release collections of hymns and maintain his stature. Opposed to the shape-note tradition, Mason pushed American music towards a European model.

The Bay Psalme Book (The Whole Booke of Psalmes Faithfully Translated into English Metre) was published in Cambridge, Massachusetts in 1640; it was the first book of any kind printed in the English colonies of North America. It became the standard used by New England churches for many years, though it contained no music itself, merely providing psalms and pointing readers to other prominent publications. The Bay Psalm Book was faithful to its source, but did not produce beautiful singing. In 1651, then, a third edition was created, and became known as the New England Psalm Book; this became the standard for many years. By this point, the evolution from the Ainsworth Psalter to the New England Psalm Book had steadily dwindled the number of tunes in use.

As Massachusetts has long maintained a great maritime tradition from the early colonial fishermen to its importance in the whaling industry in the nineteenth century, songs of the sea have been prominent in the state's musical heritage. Traditional English sea shanties were brought to New England and preserved by colonial American seamen. A New England version of the sea shanty Spanish Ladies changes 'England' to 'New England' or, in some versions, 'Boston' or 'New Bedford', and 'British sailors' to 'Yankee Whalermen'.

Folklorists who have collected traditional music of Massachusetts include Eloise Hubbard Linscott, whose field recordings from 1938 and 1941 are in the Library of Congress American Folklife Center.[1]

A number of musicians with ties to the American folk music revival have Massachusetts connections. While a teenager living in Belmont, Joan Baez gave her first concert at the legendary Club 47 in Cambridge. James Taylor was born in Boston, but later moved to North Carolina before once again relocating to Martha's Vineyard. He now lives in the town of Lennox. Paul Clayton from New Bedford, best known for his song "Gotta Travel On," was a minor figure in the folk revival. Both Bill Staines, who grew up in Lexington, and Bonnie Raitt, who attended college in Cambridge, were influenced by the folk revival through the concerts at Club 47.

The diverse contemporary Massachusetts folk music scene includes musicians such as David Coffin, who specializes in early music and sea music; Lui Collins, a folk singer/songwriter; Vance Gilbert, a folk singer with a background in jazz; and Aoife Clancy, formerly of Cherish the Ladies, who sings traditional Irish and contemporary folk songs. Notable upstarts in the Boston folk scene are "TheyWillHateUs" - an eclectic duo who create modernized versions of century old hymns. TheyWillHateUs are a faith based duo from the Boston. 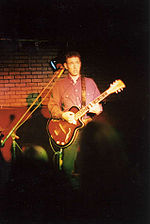 The Modern Lovers, featuring Jonathan Richman, David Robinson (later of The Cars), and, (for a short time) Jerry Harrison of Talking Heads, came out of Boston, as did more mainstream acts like Aerosmith, The Cars and Boston. The J. Geils Band formed at Worcester Polytechnic Institute in Worcester, before adding Peter Wolf and Stephen Jo Bladd from Boston band The Hallucinations to the lineup. Paul Pena was born in Hyannis and attended Clark University in Worcester. He played gigs at the Holden experiment with Bonnie Raitt an other Worcester folkies. He went on to play with T. Bone Walker and wrote the 1970s hit Jet Airliner.

Other notable alternative music bands and musicians include:

The R&B group New Edition is from the Roxbury neighborhood of Boston.

As the hardcore underground hit Boston, a few New Wave bands like Pastische, Lou Miami and the Kosmetix, Human Sexual Response, DMZ—who were to Boston what the New York Dolls were to New York City and who evolved into garage rock revivalists Lyres; The Real Kids, The Neighborhoods, The Turbines, and The Neats played any form of punk. The founder of the Boston hardcore scene was Allan Barile from Lynn, Massachusetts. Barile saw Minor Threat in Washington, D.C. and brought hardcore home with him, intensifying DC's skinhead and straight edge subcultures. Boston also developed an active hardcore zine culture by 1980, most influentially including Forced Exposure.

Barile's first band was SSD (Society System Decontrol). It formed in 1981 and recorded the following year. SSD organized their own shows, not playing at typical venues, such as punk rock mainstay The Rat, because those clubs served alcohol. They rented out Knights of Columbus halls in areas such as Cambridge and Newton, and insisted that the performances be "all ages shows". Violence was common at these concerts and many people felt they made the punk scene violent. Mostly this was felt by older punks on the scene and casual fans. Other bands soon joined. In contrast to Barile's SSD, many of these bands were from suburbs of Boston including best known Gang Green, heralding from Braintree, DYS, The FU's, Jerry's Kids, The Freeze and Last Rights; Stranglehold, and The Proleteriat from Fall River. Barile's Crew was known for being for the first major group of skinheads in the city of Boston. One of the most notorious of these straight edgers was Choke, who was actually attending Emerson College at the time. Choke played in a series of legendary bands including Negative FX, Slapshot and Last Rights. The Boston crew were a tight group of skinheads who were intensely loyal to one another and very territorial.

Unlike most hardcore bands, Boston's scene included heavy metal fans. Barile himself was a fan of AC/DC, while DYS, SSD and Gang Green all eventually made the switch to speed metal. The death of hardcore in Boston is said to have occurred in 1984, when Jerry's Kids announced at a show that "this is the end of hardcore. We started it and we're ending it here today." However, there are still many bands based out of Massachusetts that play hardcore, such as Righteous Jams and Bane.

In recent years many hardcore bands have included metalcore elements to their music. These bands have been considered the rebirth of hardcore in Boston and the surrounding areas, and bands include Black My Heart, On Broken Wings, Shere Khan (which features several members of the two previously mentioned bands), Shipwreck A.D., Death Before Dishonor, and Forced Coitus, MOB HIT (with ex-Wargasm drummer Barry Spillberg).

The late 80s to mid 90s saw many hardcore bands with a wide range of sounds. The 80s side included bands like Bloodbath, G Man, Wishful Thinking and Rumble Puppy. Many of these bands also had connections with the NYHC scene. During the early to mid nineties the scene contained acts ranging from heavy bands like Roachgrind, to punk bands like Wish and Maude, emo bands like Spoke and the abstract performance group Gutters. Most bands of the era released their own demo tapes and put out vinyl on Mark Dargie's Community Chest Records or Vandal Children Records run by Charlie Krich in Willimantic, Connecticut. Along with Mass. and Conn. basements, shows of this era happened at the Greenfield Grange, First Baptist Church of Northampton, Katina's and even the middle school hangout Club Soda. Many of these bands also appeared at one time or another at the annual Northampton High School battle of the bands.

In the late 1990s several bands in Western Massachusetts (centered around the five colleges in Northampton/Amherst) helped establish an indie rock scene. These included such bands as Apollo Sunshine, the Warren Commission, New Jersey Fairplan, Waterpistol, Psara, Delvic, The Right, Pixies and Noah's Dove. Waterpistol and Psara appear on Deep Elm Records's The Emo Diaries compilation. The Warren Commission released several albums on the Boston label Espo Records. This was followed by a second wave of Western Massachusetts music, with emo and indie rock bands including I Am Disaster, Saveyourself, and the El to Addison. Many of these bands moved to the Boston area, where they have found some success or have broken up and formed new bands.

Western Massachusetts is still home to a bountiful hardcore scene. Bands such as COD, Hands In, Shoot to Kill, Scurvy, Chuck Brunswick, Give 'Em Hell, Failures, Ampere, Orchid, Throwing Aces, Bloodwar and many others are constantly playing in and out of the area.

Metalcore in Massachusetts started from the Boston hardcore scene and the influence of bands from the New Wave of British Heavy Metal. The bands combined the two genres and created metalcore, a whole new genre of metal in itself. In the middle of this musical renaissance, were two bands from Massachusetts that would form the way metalcore sounds today. Aftershock and Overcast are known to some as the godfathers of this genre. Following the breakup of these two bands, two other metalcore acts spawned from a number of their members, namely Killswitch Engage and Shadows Fall, two of the best-selling bands in metalcore. Other best-selling Massachusetts metalcore bands are The Acacia Strain, All That Remains, Unearth and Within the Ruins. Other well-known Boston metalcore bands are Diecast and Corrin.

Western Massachusetts has been and remains the home of bands that would rather not write love songs, but songs called "Defreeze Walt Disney", "Problems With Sects", "Spider Goo", "Rabid Beaver Attack", "They Want to Make Me a Clone", and "Don Knotts (Is Mick Jagger's Dad)".

The aforementioned Pajama Slave Dancers (PSD), with their punky sensibilities, spawned Captain Testosterone and the Gypsy Stretch Mark Orchestra led by Steve Westfield. Other PSD offshoots were Chubacabra Jr., and The Uncomfortables. The Hutus and Chicken McHead openly acknowledged PSD's influence on both their lyrics and performance antics. The Rock Gods from Chicopee had a hilarious show pretending they were big rock stars, while the Donut Kings lyrics played the funny versus the silly. The Donut Kings won the 2000 Valley Advocate Grand Band Slam for best Alternative/Eclectic band. Another Grand Band Slam winner that year (for cover band) was Krazee Navel.[4]