Harney County is a county located in the U.S. state of Oregon. It is included in the eight-county definition of Eastern Oregon. Established in 1889, the county is named in honor of William S. Harney, a military officer of the period, who was involved in the Pig War and popular in the Pacific Northwest. The county seat is Burns. In 2010, the county's population was 7,422. Harney County is Oregon's largest county in area.

The Native Americans living in this region at the time of the Lewis and Clark Expedition were the Northern Paiute, who fought with the Tenino and Wasco peoples. Peter Skene Ogden was the first known European to explore this area in 1826 when he led a fur brigade for the Hudson's Bay Company.

Harney County was carved out of the southern two-thirds of Grant County on February 25, 1889. A fierce political battle, with armed "night riders" who spirited county records from Harney to Burns, ended with Burns as the county seat in 1890.

The Malheur River Indian Reservation was created by executive order on March 14, 1871 and the Northern Paiute within the Oregon state boundaries were settled there. Descendants of these people form a federally recognized tribal entity, the Burns Paiute Tribe, which has about 341 members.[1] Fewer than 35.5% of the tribal members live on the Burns Paiute Indian Colony near Burns.[1] The tribe earns revenue from a small casino, the Old Camp Casino, and renting out communal tribal lands for grazing rights to local ranchers.

Three industries have traditionally provided the county's economic base: ranching, sheep raising, and timber. The railroad, which extended into the area in 1883, served as a catalyst to the cattle industry but later contributed to its decline. By bringing farmers and sheep men to the area, it created increased competition for productive land. Harvesting and breeding of wild horses was lucrative for a period. Harney County shares the largest Ponderosa Pine forest in the nation with Grant County. Its abundance of game, numerous campsites and excellent fishing have stimulated fast-growing recreational activities.

Although county lands were open to homesteading from 1862 to 1934, the U.S. Bureau of Land Management still owns more than three million acres (12,000 km²), or 62% of the lands within the county boundaries. Facilitated on the national level by the Carey act of 1894, arid land in Harney County was donated to the state for irrigation and settlement, but all water development efforts failed.

Eventually all land claims filed under the reclamation legislation were abandoned or nullified. Malheur National Wildlife Refuge was established in 1908 and expanded in 1936. The refuge now includes 159,872 acres (646.98 km2). Borax has been mined in the Steens area, and uranium has been found on its south side. 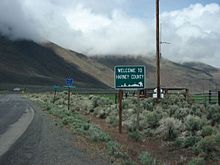 Steens Mountain is the county's most prominent geographical feature, rising 9,700 feet (3,000 m) above sea level and spanning many miles across a region that is otherwise fairly flat. To its southeast is the Alvord Desert, the driest place in Oregon, and to the north lies Harney Basin, which contains Malheur Lake and Harney Lake.

There is a small, but significant Spanish Basque community.[9]