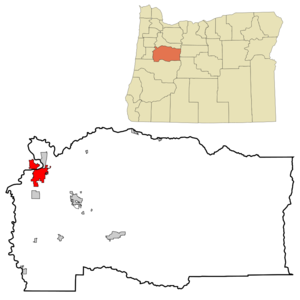 The city is located at the confluence of the and the .Up until the 19th century, the area was inhabited by , a Penutian-speaking Native American people who lived in the middle Willamette Valley.Fact|date=March 2007

The Kalapuya called the area "Takenah", from a word describing the "deep pool where the meets the " (and could humorously be translated to "hole in the ground").

The first European settler inside the current city limits of Albany arrived in 1846. Albany was founded by the brothers Walter and Thomas Monteith, a family of early prominence in the area, in 1848, when they bought the claim to the townsite from squatter Hiram Smeed for $400 and a horse. They named the city "Albany", after their hometown in New York.

The Monteiths built the first frame house in Albany in 1849. The Monteith House was considered the finest house in Oregon at the time. They opened a in their parlor the same year. The first school was built in 1851, and in 1852, the first steamboat arrived and the first flour mill was built.

In 1849, the town of Takenah was established near Albany, and in 1854, the gave the name Takenah to both towns. The name Albany was restored by the legislature in 1855.

Albany post office was established on and renamed to "New Albany" on . The name was changed back to Albany in 1853.

Although Albany replaced the community of Calapooia near Sweet Home as the county seat in 1853,

In the 1970s Albany attempted to extend its to cover the land to include a processing plant of . Wah Chang responded in 1974 by sponsoring a vote to incorporate the desired properties as Millersburg.

Albany lies in the central part of Oregon's most populated region, the . Though most of Albany falls within Linn County a portion of it rests on the west side of the in Benton County.

Albany is known as the "rare metals capital of the world", producing , and . [ [http://www.netl.doe.gov/careers/community.html NETL: Careers and Fellowships - NETL Community ] ]

The decline of the timber industry and the outsourcing of manufacturing jobs has left Albany with a very high unemployment rate.Fact|date=June 2007

In 2006 purchased 243 acres within the city for a planned and Propel manufacturing plant, but the company has placed those plans on hold citing declining growth in production.

Albany is the home of , and is served by the , including , and .

The primary media outlet is the daily newspaper "".

*The - Originally constructed near the Calapooia River, the Monteith house is one of the oldest buildings in Albany. It has been relocated twice, most recently to downtown Albany where is serves as a museum and is on the .

*Historic Downtown Albany includes antique stores, restaurants, Albany Civic Theater, and one of the oldest Carnegie libraries still being used as a library. As of December 2006, a was under construction. [cite web |url= http://www.albanybrassring.com |title= Albany Brass Ring] Downtown Albany is a National Historic District.

* - An annual concert series at Montieth Riverpark. The concerts stay in early july and run through mid august.