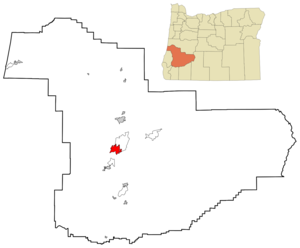 The city was named for Aaron Rose, who settled within the current city limits , . Rose, who came from German Jewish ancestry, was born in 1813 in . In 1851, he came to Oregon from , where he had lived since 1837. His house in Roseburg served as a tavern for many years, and was the first roadside inn in the area. Rose died in 1899.

Roseburg was first known as Deer Creek because it was at the confluence of Deer Creek and the . In 1854, voters chose Roseburg as the over rival town Winchester. Rose donated three acres of land and $1,000 for the building of the courthouse, and the important buildings of Winchester were moved to Roseburg before 1860.

On , at approximately 1:00 a.m., the Gerretsen Building Supply Company [ [http://www.gerretsen.com/ Gerretsen Building Supply] ] caught fire. Firefighters soon arrived at the building, located near Oak and Pine street, to extinguish the fire. Earlier in the evening, a truck driver for the Pacific Powder Company, George Rutherford, had parked his explosives truck in front of the building, a fact which went unnoticed until shortly before the truck exploded, destroying buildings in an eight-block radius and severely damaging 30 more blocks.

The truck was loaded with two tons of and four-and-a-half tons of the blasting agent . Rutherford had parked the truck after arranging his delivery for the following morning, despite warnings given to the Pacific Powder Company two days earlier not to leave such trucks unattended or park them in "congested areas." Fourteen people died in the blast and fire and 125 were injured. Damage was estimated at ten to twelve million dollars; the Powder company was eventually made to pay $1.2 million in civil damages, but was acquitted of criminal wrongdoing.

Roseburg's downtown was rebuilt, primarily by businesses using money collected from insurance claims. The city built a new bridge over the South Umpqua River on parcels affected by the disaster. Since the incident, it is commonly referred to as the "Roseburg Blast" or simply "The Blast." In 2005, produced a documentary examining the Blast and the experiences of those who were involved or witnessed it, entitled "The Roseburg Blast: A Catastrophe and Its Heroes".

Roseburg is located near the confluence of the north and south forks of the and the . By car, it is 67 miles (108 kilometers) south on I-5 from Eugene and 123 miles north of the border.

There were 8,237 households out of which 28.9% had children under the age of 18 living with them, 46.2% were married couples living together, 11.9% had a female householder with no husband present, and 38.1% were non-families. 31.6% of all households were made up of individuals and 13.9% had someone living alone who was 65 years of age or older. The average household size was 2.32 and the average family size was 2.88.

Average high temperatures for Roseburg peak in the high 80s (°F) in early August, with December and January lows in the low 30s. During the winter, rainfalls of 5-6 inches per month are not uncommon.

runs through downtown Roseburg as the main north-south arterial. Interstate 5 runs along the west side of the city, across the from downtown.

There is a Greyhound bus station with connecting service to passenger rail service. The freight railway runs through Roseburg. There are two public airports, Marion E. Carl Memorial Field at the north end of town and to the west. Roseburg and surrounding communities are served by Umpqua Transit, a local bus service.