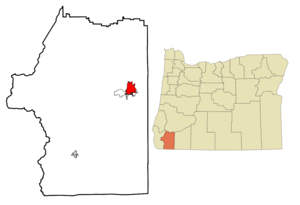 Grants Pass is a city in, and the of Josephine County, , GR|6. The city is located on Interstate 5, northwest of Medford. Attractions include the Rogue River, famous for its rafting, and the nearby located 30 miles south of the city. As of the 2000 census, the city population was 23,003. As of 2007, the population is 34,237

Early hunters and trappers, following the , passed through the site beginning in the 1820s. In the late 1840s, settlers (mostly American) following the began traveling through the area on their way to the . The name was selected to honor General U.S. Grant's success at Vicksburg and a post office was established on , . The city of Grants Pass was incorporated in 1887, a year after it had become the county seat. Fact|date=May 2007

In 1922, a group of local businessmen incorporated the Grants Pass Cavemen. Taking their name from the nearby , this group was one of many groups of boosterism common in the United States at the time. For decades afterwards, this group would represent their city in countless public gatherings, dressed in furs and bearing clubs, performing such uncivilized acts as capturing female crowd members and politicians and putting them in their cages. To honor this group, in 1971 a fiberglass statue of a caveman was erected at the corner of Morgan Lane and Sixth Street. Grants Pass High School's mascot is also the . The original monument was damaged by in 2004 and repaired in 2005.

True to its motto, "It's the climate!" Grants Pass enjoys a Zone 8 climate with hot, short summers and mild but pronounced winters with sharply defined seasons without the severe winter cold or enervating humidity. This climate zone differs from the rest of Western Oregon in that there is less ocean influence, cooler winters, and warmer drier summers.

The Rogue River runs through Grants Pass and many people come to the city to raft the river's world-class rapids.Fact|date=March 2007 Visitors can also travel down the river on s.

There were 9,376 households out of which 31.1% had children under the age of 18 living with them, 44.5% were married couples living together, 14.5% had a female householder with no husband present, and 36.8% were non-families. 31.2% of all households were made up of individuals and 16.0% had someone living alone who was 65 years of age or older. The average household size was 2.36 and the average family size was 2.94.

Historically the city's economy has been based on . However, in recent years the importance of timber on the local economy has decreased and has subsequently been replaced by tourism as the most prominent source of revenue for the city. Tourism is now a very visible part of the city.

During the summer, there are many different attractions for tourists to visit. There is a growers' market, concerts are held in Riverside Park on many summer nights, and there are many other parks to visit. The historic theater downtown has been transformed into a performing arts venue and frequently hosts top name national acts. The historic downtown area is lined with antique and specialty shops and is a destination for collectors and shoppers. Formerly, local artists decorated bear statues; this ended in 2006. From 2006-present, statues of various northwest animals have lined the streets. The Grants Pass Towne Center Association's "Back to the 50's" Celebration includes free concerts, a nearly 600-vehicle Classic Car Cruise, Poker Runs, and thematic shopping. [ [http://www.grantspasstownecenter.org/ Grants Pass Towne Center Association - Association of Grants Pass Merchants and Businesses Supporting Grants Pass Oregon Business, Businesses and Community ] ]

Boatnik is held every Memorial Day weekend in Grants Pass and is one of the years most popular events in Grants Pass, drawing many visitors to town. The activities start in Riverside Park with the Davis Shows Carnival. Friday includes the Boat Show on the River - 8:00pm to 9:00pm Sprints, Drags, and Hydros. Saturday morning is the well-known Boatnik parade. Sunday includes the Fireworks Display at Dusk at Riverside Park. Monday is the highlight of Boatnik featuring an F15 Flyover and the world famous white water hydroplane race. [ [http://www.boatnik.com Boatnik 2008 Memorial Day Celebration in Grants Pass, Oregon ] ]

During the winter, there are the Christmas murals on many downtown streets, along with Santa's arrival by train to the Town Square and a Christmas tree-lighting ceremony.

In 1986, Grants Pass won one of ten s given out that year. The city has one of the top 100 hospitals : Three Rivers Community Hospital and Health Center.Fact|date=January 2008

The Grants Pass post office contains two murals done through the (often mistakenly referred to as the "WPA"), both painted in 1938. Of the ten government-sponsored era murals in Oregon, no other post office contains two. The murals are "Rogue River Indians" by (who also did a 1959 mural at ) and "Early and Contemporary Industries" by . [ [http://www.wpamurals.com/GrantsPs.htm] ]

Grants Pass has numerous and diverse parks and green spaces.

Country musician and member has a country song called "Grants Pass" in which he describes being an environmentalist in the small logging town. The song makes many references to local landmarks including Shenanigan's Saloon, the Silver Fire Round-Up, The Giant Caveman, and the banner that reads "It's the climate".