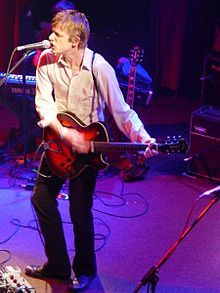 The band was formed in late 1993 by lead singer/guitarist Britt Daniel and drummer Jim Eno, after the two met as members of The Alien Beats.[2] The name Spoon was chosen to honor the 1970s German avant-garde band Can, whose hit song "Spoon" was the theme song to the movie Das Messer.[3] Eno describes Spoon's music as "rock 'n' roll."[4]

Spoon's recording debut came with the vinyl release of Nefarious in May 1994.[5] In 1995 the band signed with Matador Records, and within a year, Spoon released its first full-length LP Telephono in 1996. The album was met with mixed reviews, with critics often comparing their sound with the likes of Pixies and Wire.[6] But comparisons aside, Telephono showed signs of a band slipping free of its influences, mixing post-punk with a blend of pop.[7]

Less than a year later, Spoon released its second EP, Soft Effects, which served as a transition to their more distinctive, honed sound.[8] Unlike its predecessors, Soft Effects was less noisy and brash, showcasing a more sophisticated, minimalist approach.[9]

In late 1996, Spoon was playing a gig at Denton, Texas, club the Argo with Ed Cooper and local band called Corn Spoon, for whom Joshua Zarbo was playing bass at the time. Zarbo was invited to audition for Daniel and Eno in 1997, and subsequently became the band's full-time bassist until his permanent departure in 2007.[10]

After the release of Soft Effects, Spoon signed to Elektra Records in 1998. Through this major label the band released A Series of Sneaks in May 1998. The album did not sell as well as the label had hoped; merely four months after the release of Sneaks, Spoon's Elektra A&R man Ron Laffitte quit his job and that week the band was dropped from the label.[11] Angry with Laffitte, who had promised to stick with the band, Spoon recorded a vindictive yet humorously-titled two-song concept single entitled "The Agony of Laffitte." They lamented their experience with the music business executive and questioned his motivations with the songs “The Agony of Laffitte” and “Laffitte Don’t Fail Me Now.”[12]

Spoon signed with the indie rock label Merge Records and released the Love Ways EP in 2000.[9] They did this without bassist Josh Zarbo, who had briefly left the band.[13] In 2001, Spoon released its third LP entitled Girls Can Tell. The new record was a success, selling more copies than both their previous LP releases combined.[14] The band’s next release in 2002, Kill the Moonlight saw similar success.[14] Kill the Moonlight also contained the single, "The Way We Get By," which was popularized by its placement on the teen drama The O.C.[15] Their next album, Gimme Fiction, was released in May 2005, and debuted at number 44 on the Billboard 200, selling more than 160,000 copies.[16]

Spoon’s Britt Daniel collaborated with Brian Reitzell to compose and arrange the soundtrack for the 2006 film Stranger than Fiction. The soundtrack consists chiefly of music performed by Spoon, and according to the liner notes of the official soundtrack, Brian Reitzell collaborated with Britt Daniel to compose the score, while also adapting several tracks from Kill the Moonlight and Gimme Fiction into instrumental versions of the songs.

On July 10, 2007, Ga Ga Ga Ga Ga was released and debuted at number 10 on the Billboard 200.[17] Since the release of Kill the Moonlight in 2002, Spoon has performed on late night talk shows, such as Late Show with David Letterman, Late Night with Conan O'Brien, The Late Late Show With Craig Ferguson, Last Call with Carson Daly, and The Tonight Show with Conan O'Brien as well as the PBS show Austin City Limits. They were also musical guests on Saturday Night Live on October 6, 2007, where they performed "The Underdog"[18] and "You Got Yr. Cherry Bomb".[19]

"I Turn My Camera On", from Gimme Fiction, was featured in the second season of Veronica Mars, as well as on the pilot episode of Bones, and the May 4, 2008 episode of The Simpsons. "Don't Make Me a Target" "Don't You Evah" and "Got Nuffin" have been featured on Chuck. Adam Buxton used the song "Don't Make Me a Target" for a segment of the pilot of his BBC Three series MeeBOX. "I Summon You," from Gimme Fiction, was featured in the sixth season of Scrubs, in the episode, "My Perspective", as well as in Season 2 of Veronica Mars in the episode "Rashard and Wallace Go to White Castle". "Don't You Evah" and "I Turn My Camera On" have become popular on YouTube as dance soundtracks for the Japanese robot Keepon, accumulating over two million hits.[20] The song "Take A Walk" from Girls Can Tell was featured on the soundtrack to the popular video game "Matt Hoffman's Pro BMX 2". The song "The Underdog" was featured in the film Cloverfield, and included in the movie's soundtrack, Rob's Party Mix. It was also featured in Episode 10 of the fourth season of Numb3rs, in Episode 8 of the third season of How I Met Your Mother, as well as the movies 17 Again, I Love You, Man, and Horrible Bosses. "Don't You Evah" was featured on the soundtrack for the video game MLB 09: The Show. The song "The Infinite Pet" from Gimme Fiction was featured in the film (500) Days of Summer[21] "Got Nuffin" was featured as the closing track in the Season 7 finale of House.

In 2009, review aggregator Metacritic ranked Spoon as its "Top overall artist of the decade," based on the band's consistently high review scores between 2000 and 2009, amongst other factors.[23]

On April 12, 2010 Spoon made a guest appearance on Conan O'Brien's The Legally Prohibited from Being Funny on Television Tour in Eugene, Oregon where they performed the song ‘’I Summon You‘’ from their album Gimme Fiction.[24]